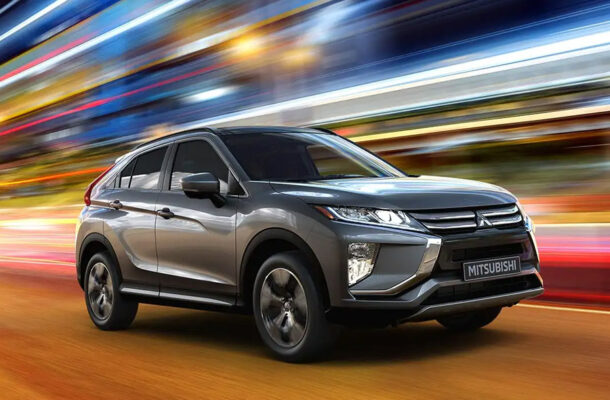 The 2020 Mitsubishi Eclipse Cross may share part of its name with a ‘90s sport coupe, but make no mistake, it’s a dramatically-styled crossover that’s long on value.

The Eclipse Cross gets few changes for 2020 outside the addition of a mid-tier SP trim to slot between the LE and the SE. The SP essentially adds some carbon-fiber-like pieces and other sporty touches to the LE. The SE and SEL trims benefit from some newly standard active-safety features as well.

All Eclipse Cross models get a 1.5-liter turbo-4 that makes 152 horsepower and 184 lb-ft of torque. It mates up with a continuously variable transmission that mimics an 8-speed in its operation. Front-wheel drive is standard on all trims and all-wheel drive is available.

No NHTSA crash-test data exists for the Eclipse Cross, but the IIHS has named the crossover a Top Safety Pick. Along with that, 2020 sees the addition of several standard active-safety features on the SE and SEL trims. These include automatic emergency braking with pedestrian detection, lane-departure warnings, and automatic high beam headlights.

Every Eclipse Cross also comes with a 10-year/100,000-mile powertrain warranty.

All prices include a $1,195 destination charge. All-wheel drive is available on every model for $1,600.

The lineup begins with the Eclipse Cross ES ($24,190), which includes a 7.0-inch touchscreen with Bluetooth, one USB port, cloth upholstery, and automatic climate control.

The SE ($26,840) has leather seats and steering wheel, chrome styling, keyless entry and keyless ignition, and the aforementioned active-safety features.

Say what you will about Eclipse Cross, but there’s no denying it wears a bold look. Sharp creases, a razor-like grille pattern, swept-back windshield, and a hatch with a short but steep rake all lend this crossover a sense of flair that’s missing from some of its anodyne competitors. It won’t always be called attractive, but it’ll never be accused of being boring.

The Eclipse Cross has a dated interior, which still functions well. All trims come with a 7.0-inch touchscreen. Base models get Bluetooth, while all other trims also enjoy Apple CarPlay and Android Auto compatibility. Multiple USB ports can be found on all but the base model.

Front seats are fairly comfortable, but lateral support is somewhat lacking. Only SELs get a power driver seat; all other trims make do with manual controls.

The back seat adjusts fore and aft, which is a nice touch for longer-legged passengers, leg room is average. Head room is limited, thanks to a roofline that slopes downward. Seating two back there is better than trying to squeeze three across. Like most crossovers of this size, three abreast is best limited to short trips rather than all-day jaunts.

There’s 22 cubic feet of cargo room behind the rear bench, but the load floor is 4 inches higher than the passenger seat floor, which creates an odd space when the seats are pushed forward. With the rear bench flat, cargo space improves to 48 cubic feet. That’s decent but still trails some competitors.

With every Eclipse Cross getting the same powertrain as well as suspension tuning, all versions return the same experience from behind the wheel.

The 1.5-liter turbo-4 sports 152 horsepower, which isn’t bad relative to the class, but the CVT it pairs with doesn’t do a great job getting that power to the wheels. That accounts for why getting to 60 mph is a 10-second trip, trailing the competition by a decent margin. Adding all-wheel drive slows it down more due to extra weight.

The lack of power doesn’t come with much of a fuel economy benefit, either. Front-drive models are rated for 26 mpg city, 29 highway, 27 combined. All-wheel drive drops that rating to 25/28/26 mpg. These numbers are roughly average for the class.

Despite the lackluster powertrain, the Eclipse Sport rides well and has surprisingly good steering feel. Bumps, potholes, and expansion joints are all handled by the chassis with confidence.

The 2020 Mitsubishi Eclipse Cross puts its emphasis on value and on a long, strong warranty. Were we to buy one, it’d be the Eclipse Cross SE, for its safety features.