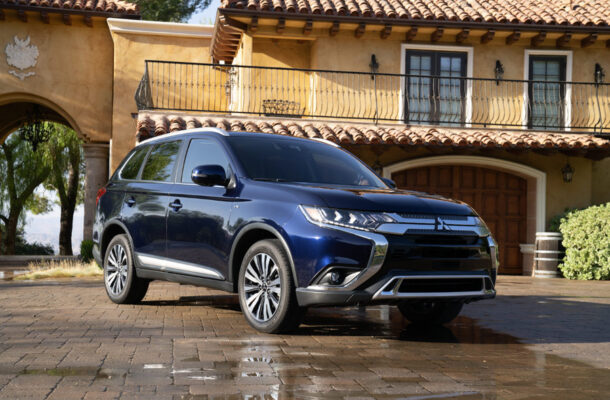 The 2020 Mitsubishi Outlander is a seven-passenger family crossover that offers spacious appointments and great features for a price that undercuts many competitors. It’s not as refined as some of others in the segment, but it holds its own thanks to its value and individuality.

A few noteworthy changes have occured for 2020, including automatic emergency braking being made standard almost across the board and an updated all-wheel-drive system for Outlanders so equipped. There’s also a new special-edition SP trim that adds black exterior accents. Rounding out the updates are small touches like another third-row USB port and newly-standard power lumbar support for the driver’s seat.

Two engines are offered. Most models will get the base 2.4-liter 4-cylinder that makes 166 horsepower and 162 lb-ft of torque. Unlike most of the competition, this engine isn’t turbocharged. Front-wheel drive is standard, but all-wheel drive is available.

The other option is a 3.0-liter V-6 that comes standard on the GT trim. With the two extra cylinders comes another 60 or so horsepower, for a total of 224 horses and 215 lb-ft. All-wheel drive is mandatory with this engine.

The base engine mates up to a continuously variable transmission, while the V-6 gets a traditional 6-speed automatic.

Along with the two conventional engines, there’s also a plug-in hybrid model with 22 miles of all-electric range. The PHEV is only available in two well-equipped trim levels; all-wheel drive is also standard. Fuel economy steps up to 74 MPGe or 25 mpg combined.

That’s an improvement over either gas engine. Base 4-cylinder models with front-drive are rated at 25 mpg city, 30 highway, 27 combined, while all-wheel drive drops those figures slightly to 24/29/26 mpg. The GT model is rated at 20/27/22 mpg.

The IIHS and NHTSA have had mostly good things to say about the Outlander. The IIHS called it one of their Top Safety Picks for acing all their crash tests. The NHTSA only gave the front-drive Outlander a four-star overall rating, but all-wheel-drive models earned a five-star rating.

ES models ($26,090) are the cheapest Outlanders. They don’t get any active safety features, but come with 18-inch wheels, a 7.0-inch touchscreen, power lumbar support for the driver’s seat, dual-zone climate control, and cloth upholstery.

The SE trim ($27,290) adds an 8.0-inch touchscreen, most of the aforementioned active-safety equipment, and an auto-dimming rearview mirror.

The LE ($28,490) includes blind-spot monitors, rear cross-traffic alerts, and a power sunroof, as well as some black trim.

The special-edition SP ($28,690) adds even more black accents to the front, side, and rear end.

The SEL ($28,690, or $37,490 for PHEV) piles on leather upholstery, power-folding side mirrors, a power liftgate, and Apple CarPlay and Android Auto compatibility.

The top-shelf GT S-AWC ($34,940, or $42,890 for PHEV) is the only Outlander to be offered exclusively with AWD and get its power from a V-6 engine. Other standard equipment includes paddle shifters, an upgraded sound system, a surround-view camera system, adaptive cruise control, heated steering wheel, and LED headlights.

The Outlander perhaps best showcases Mitsubishi’s design language, which is most distinctive when viewed from up front. The two-bar chrome grille and boomerang-like chrome trim that define its front fascia is an attractive, premium look. Base models wear the same trim as higher-spec models, which means there’s no aesthetic price to pay for shopping the bargain aisle at your local Mitsubishi store.

Overall, the brand’s trademark styling cues look more resolved on the Outlander than they do on the smaller crossovers also sold by Mitsubishi.

The Outlander’s interior design is probably the most fashionable out of all the current Mitsubishis. The driver-oriented, horizontally-themed dashboard is anchored with a large touchscreen.

Most models will enjoy an 8.0-inch unit that comes with Bluetooth, SiriusXM radio, and Apple CarPlay and Android Auto. It’s a decent infotainment system that works well.

The Outlander is a fairly roomy three-row crossover. There’s plenty of second-row leg room but not so much in the third; it’s best to leave the far-back row to the children.

There’s 10.3 cubic feet of cargo space behind the third row, but fold down the third and second rows and that expands to a spacious 32.4 and 62.3 cubic feet, respectively.

The Outlander offers three different powertrains, but unfortunately the better two options are priced beyond what most consumers are willing to pay for a Mitsubishi. That leaves the 2.4-liter 4-cylinder as the volume engine. Its 166 horsepower and 162 lb-ft of torque has average acceleration at best, and its CVT revs the engine to make the most of it, which generates interior noise.

The V-6, with its 224 horsepower and 6-speed automatic, is decidedly better. It is only available at the very top of the Outlander’s pricing ladder.

The plug-in hybrid is an interesting choice. Its 25-mpg combined rating doesn’t quite top the 4-cylinder’s combined rating of 27 mpg, but the gas engine can’t offer 22 miles of all-electric driving. For those whose driving is mostly local, the PHEV Outlander is a great choice.

All Outlanders ride well, with fairly sharp and precise handling. Its cornering and roadholding abilities won’t disappoint consumers looking for a comfortable crossover.

The 2020 Mitsubishi Outlander isn’t the newest three-row out there, and nor is it the fastest or most efficient. But it offers unique style, seven-passenger seating, and a value that’s hard to beat, undercutting the competition by thousands. Our choice is an SE for its extra features and $27,000 price tag.

—By Anthony Sophinos, with driving impressions by The Car Connection