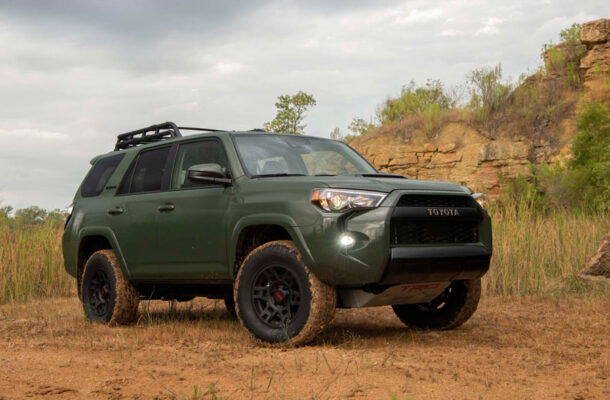 The 2020 Toyota 4Runner’s an old-school SUV. It has a body-on-frame structure, a solid rear axle, and beefy pickup-truck parts. That gives the base SR5 model some significant off-road capability, while the TRD Off Road and TRD Pro models take the recipe to its limits.

The 4Runner’s engine is a 4.0-liter V-6 making 270 horsepower and 278 pound-feet of torque, mated to a 5-speed automatic transmission. The seats are big and soft, and even though they’re mounted low, it’s a big step up into the cab. Thanks in part to its weight and big tires, the 4Runner’s handling can feel ponderous at slow speeds.

Ironically, the TRD Off Road can make the 4Runner feel more secure on-road. It can be equipped with hydraulically actuated sway bars that reduce lean in curves. The TRD Pro uses another suspension setup, Fox dual-reservoir shocks and a 2.5-inch suspension lift that gives the 4Runner a plush ride, although an even higher step up.

The rear-wheel-drive 4Runner gets 17 mpg city, 21 highway, 18 combined, while the four-wheel-drive model remarkably gets virtually the same, at 17/20/18 mpg.

The NHTSA gave the 2019 4Runner four out of five stars overall in its crash tests. The IIHS gave it its top “Good” scores in many crash tests, but “Marginal” in the driver-side small-overlap test.

The base 4Runner SR5 costs around $36,000 with rear-wheel drive, $38,000 with four-wheel drive. Standard equipment includes power features, an 8.0-inch touchscreen for infotainment. A  Premium package adds synthetic leather upholstery and a power moonroof.

For about $37,800, the SR5 Premium adds a power moonroof, synthetic leather seats that are heated up front, and a few other features.

The TRD Off Road runs about $41,000 and comes with a locking rear differential, off-road cruise control, and driving modes for four-wheeling. The best option is the Kinetic Dynamic Suspension System, which Toyota bundles with navigation for about $1,600.

For about the same price as the TRD Pro, the 4Runner Limited features big wheels and chrome-laden dashboard.

The 2020 Toyota 4Runner is an attention-grabber. Its front end has big air intakes and sharp headlights that dig deep into its flared fenders. The grille has been tweaked a bit to house sensors for the automatic emergency braking and adaptive cruise control systems, but it’s barely noticeable compared to last year.

The blocky profile is straight out of the 1990s. The 4Runner sits high off the ground and rides on tires nearly as tall as the roof of some sports cars.

At the rear, the styling isn’t cohesive, with a bland tailgate that’s not very well integrated into the rest of the truck’s design.

The chunky and blocky dashboard puts the 8.0-inch touchscreen up high. \Tough cloth seats come standard on the SR5, but many 4Runners on dealer lots are upholstered in easy-to-clean synthetic or real leather trim. Even the Limited doesn’t feel especially luxurious inside.

The front seats are large and plush. Occupants sit with their legs out, rather than the chairlike upright position more common in SUVs. The seats are mounted low, but the floor is high and the roof low, so head room still isn’t great.

The rear seat has decent space for outboard passengers but the middle position is tight. The cabin is relatively short, but there’s still 48 cubic feet of cargo space behind the second row and nearly 90 cubic feet with it folded. The optional third-row seat is squeezed in, leaving only 9 cubic feet behind it.

There’s no optional power liftgate, but the rear window slides down at the touch of a button. To make up for the high cargo floor, Toyota offers an optional slide-out floor that’s quite handy.

All 4Runners use a 4.0-liter V-6 making 270 hp and 278 lb-ft of torque, mated to a 5-speed automatic transmission. It’s been a long time since 5-speed automatics were common, but that’s the 4Runner for you. The SR5 and Limited models come standard with rear-wheel drive, while a part-time four-wheel-drive system is optional on SR5 and standard on the TRD models. Only the Limited offers an all-wheel-drive system that can be used on dry pavement.

The 4Runner rides on big tires and has a lot of ground clearance, so it can be a handful on pavement. Most versions have light steering that requires extra corrections at speed. All versions bounce softly over big bumps. The brakes are plenty strong.

The SR5 is capable of taming a dirt road, but it’s the TRD models that bring real confidence. The TRD Off Road adds a locking rear differential, modes to set the traction control system for different terrain, and an off-road cruise control system that can lope the SUV along at a snail’s pace over serious moguls. The crawl control system is effective.

The optional Kinetic Dynamic Suspension System on the TRD Off Road consists of thicker, hydraulically actuated sway bars that reduce lean on pavement and increase wheel travel off-road. The suspension doesn’t transform the 4Runner, but it improves the standard suspension.

The TRD Pro uses a lifted suspension and Fox shocks that give it a plush ride on road, and a remarkably compliant ride off-road.

The Limited actually stiffens the ride, with its 20-inch wheels having narrow sidewalls.

If you like your SUVs rugged and think car-based crossovers are for beginners, then you won’t run from the throwback 2020 Toyota 4Runner. It’s an off-road brute, but gentle enough for driving every day. That said, it’s hard to settle for anything less than the best available equipment in the 4Runner.