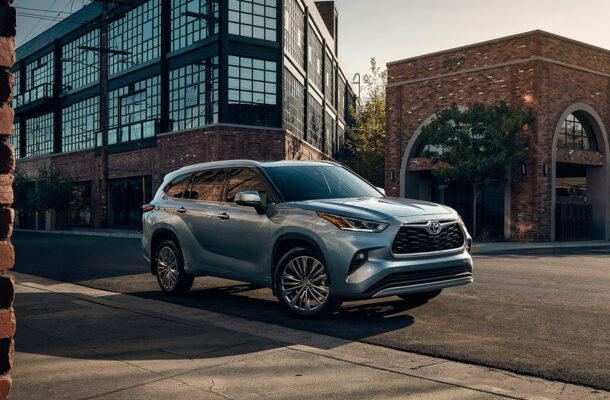 The 2020 Toyota Highlander has been redesigned. It features a larger footprint, new styling and a new interior with comfortable seats for five passengers and vast space for cargo. A third row is optional.

The new 2020 Highlander rides on new modular architecture shared with a number of other Toyota vehicles such as the Camry and RAV4. It’s 194.9 inches long, 76.0 inches wide, and rides on a 112.2-inch wheelbase. Its shape isn’t much different than last year, though it’s grown a little less angular.

The new Highlander rides and handles better than its rivals, with front-wheel or all-wheel drive. The base engine is a 3.5-liter V-6 making 295 horsepower and 263 pound-feet of torque, mated to an 8-speed automatic transmission. There is also a hybrid model that makes 243 horsepower while delivering 36 mpg combined, which is a remarkable number for a big family vehicle. With confident steering and a compliant ride, the new Highlander elevates its family-vehicle game.

Fuel economy ranges from 23 mpg combined in the heaviest Highlander V-6 editions, to 36 mpg in the Hybrid.

The $37,920 Highlander LE adds a power liftgate, blind-spot monitors, fog lights, and leather around the steering wheels and shift knobs.

The $47,970 Highlander Platinum gets a power panoramic moonroof, heated second-row seats, a rearview mirror that doubles as a display for the rearview camera, and a surround-view camera system. With navigation, a 12.3-inch touchscreen, JBL audio, and a hands-free tailgate, the price could run to more than $50,000.

The Highlander Hybrid costs only $1,400 more in each of its four models. The front-wheel drive Hybrid LE is $39,320. The XLE, Limited and Premium add premium audio and wide 12.3-inch touchscreen, among other features.
Safety options include a surround-view camera system with excellent resolution.

The body of the new Highlander is imperfect but interesting. The lines of the previous Highlander were straight as an arrow, but the 2020 Highlander gets some attitude, with bulging sills and fenders, muscular haunches, and big air intakes. The grille remains in the shape of an inverted trapezoid, but its size has been reduced, with a big chrome Toyota emblem attached to the center.

The high and pinched taillights lift the Highlander’s rear. With the athletic haunches and visually raised rear end, the Highlander looks like a sprinter in the starting blocks.

The cabin of the new Highlander is more adventurous than that of its little brother the RAV4. The design of the cockpit works well, with striking asymmetry. Most of the controls are grouped around a standard 8.0-inch or optional 12.3-inch touchscreen for infotainment, with redundant knobs and buttons below. The touch-controls cant toward the driver, while a big shelf and shallow storage bins are located ahead of the front passenger.

The multi-tier dash holds a few shallow bins to hold smartphones, keys, and even mail. The open bin in the center stack has a pass-through to the USB port below, although it’s quite shallow. Wireless charging happens in the deep center console, under a sliding cover. The less expensive Highlanders use hard plastic on the dash and doors, but Limited and Platinum models get softer plastic, as well as a nice caramel interior scheme.

The standard upholstery material is a shiny but grippy cloth, while synthetic leather and real leather grace the Limited and Platinum models. The higher-priced trims get heated and cooled seats, and most trims come with a power passenger seat, but it doesn’t tilt its bottom cushion, which limits the comfort.

The 2020 Highlander’s larger footprint results in a more spacious interior, with excellent space in the first and second rows. The seats are fairly comfortable, however the front seat cushions are too deeply dished for our tastes.The driving position is good, with a low-mounted tilt/telescope wheel, available lumbar cushioning, and excellent head room, even under the sunroof.

In row two, the L, LE and XLE have a bench seat that’s fine for three adults across. Higher trims have captain’s chairs in the second row, separated by a low console, and all but the Platinum can revert to a middle-row bench with great head and leg room. The seats slide forward to open better access to the third-row seat, but can’t do so when a car seat is installed. Legroom in the rear is really good, at 41.0 inches.

The optional third-row seats are fine for small people who don’t need more than 27.7 inches of legroom.

Behind the optional third row, there’s 16.0 cubic feet of cargo space. Without that row, or with it folded flat, there is 48.4 cubic feet, and behind the front row with the second row down, there’s 84.3 cubic feet. That vast space accessed by a standard power tailgate that’s hands-free on some models.

On the non-hybrid Highlander, power comes from a 3.5-liter V-6 making 295 horsepower and 263 pound-feet of torque, mated to a responsive 8-speed automatic transmission with either front-wheel or all-wheel drive. The performance of the powertrain is slick and effortless. Even though the Highlander weighs at least 4,145 pounds, its acceleration is vivid.

The Highlander Hybrid is 450 pounds heavier, with a curb weight of at least 4,595 pounds. Toyota pairs a 2.5-liter inline-4 gas engine to a nickel-metal hydride battery pack mounted below the rear seats, using a continuously variable automatic transmission (CVT). The hybrid system is good for a total output of 243 hp. The torque from electric power pushes it briskly off the line, although it’s not as quick as the V-6 with the 8-speed.

At first the Hybrid feels eager, but it grumbles a bit at full bore. All will be forgiven when you eventually, much later, have to stop for gas. That 36 miles per gallon will be a great relief to a family budget.

The steering on all Highlanders is weighted well, and provides good feedback. It’s much more engaging than the previous Highlander.

The suspension–conventional struts in front, links in rear–nicely dampens the ride. No expensive adaptive dampers needed. The Hybrid rides a bit better thanks to its extra weight.

The all-wheel-drive system on the L, LE, and XLE can send 50 percent of the engine torque to the rear wheels when needed to improve grip in slippery situations including simple wet roads. The Limited and Platinum models use a more sophisticated all-wheel-drive system that adds individual braking on the left and right rear wheels for even more grip. That high-tech system also offers modes for off-road and slick terrain. But don’t mistake the Highlander for a boulder crawler.

The Hybrids get yet another drivetrain setup. When equipped with all-wheel drive, the Highlander Hybrid has a second electric motor to power its rear axle. No mechanical connection exists between its front and rear wheels. On gravel or slippery pavement, the Hybrid struggles for traction until the rear electric motor kicks in to help.

The redesigned 2020 Toyota Highlander Hybrid nails it in every area. The styling is bolder, the cabin is roomier, the handling is sharper, and the ride is more compliant. Both powertrains are aces: the V-6 with 8-speed automatic is quick and powerful, while the hybrid with CVT gets a fabulous 35 mpg.