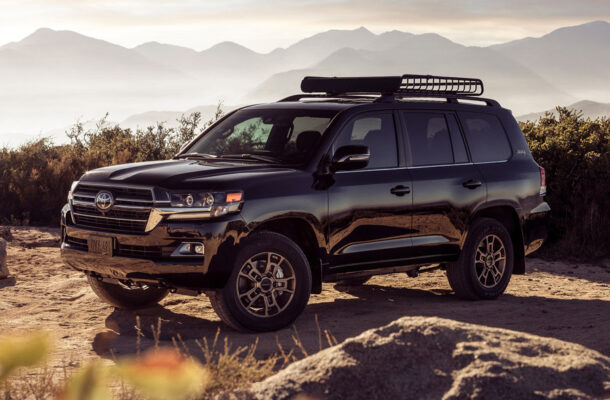 For 2020 Toyota recognizes that heritage with a new model, the Heritage Edition, which eliminates the third row, drops the running boards and refrigerator in the center console, and adds BBS wheels and a roof basket.

All 2020 Land Cruisers use a potent 381-horsepower 5.7-liter V-8 mated to an 8-speed automatic transmission and standard four-wheel drive with a two-speed transfer case. Its arsenal of 4WD parts includes a multi-mode traction control system, crawl control that allows the truck to lope along at a walking pace, and a trick system that reduces the turning radius in tight spots.

None of that equipment does the Land Cruiser any favors around town, where it’s a lumbering beast. The ride is surprisingly (or not) soft. The cabin is as spacious as might be expected, although not as luxurious as the price tag suggests.

Not surprisingly (for sure), the 2020 Land Cruiser is one of the thirstiest new vehicles available. It’s rated by the EPA at just 13 mpg city, 17 highway, 14 combined. The good news is that it runs on regular fuel.

Because it was designed as an off-roader, it has a high stance and short overhangs. The running boards make it easier to reach the cabin.

The leather is soft, and it’s warm in brown; but in black, with a black headliner, it makes the big cabin feel small. For the price, the cabin also lacks a premium sound system, elegant wood trim, and infotainment with Apple and Android Auto compatibility.

The dashboard is dominated by a 9.0-inch touchscreen. The infotainment software is reasonably intuitive.

The heated and cooled front thrones provide an expansive view. The rear seat is also heated, and has enough room for three adults. The third row is a challenge to reach and tight when you get back there.

The tailgate is split horizontally, with power operation, resulting in what’s either a convenient bench for tailgating, or a long reach into the cargo area.

The 5.7-liter V-8 makes 381 hp and a whomping 401 lb-ft of torque, enough to pull the 5,800-pound Land Cruiser with little effort. The acceleration is strong. The 8-speed automatic transmission is generally well behaved.

The truck-like solid rear axle and separate ladder frame aren’t comfortable on winding roads, allowing the Land Cruiser to porpoise around. And the limited feedback provided by the light steering doesn’t help the handling.

The trick suspension uses huge anti-roll bars that push down on the wheels in hard cornering, and this helps alleviate the situation somewhat. The system is tuned to allow for off-road articulation at slow speeds.

The Land Cruiser feels better out on the open highway. And even better off-road, where it was born to be.

Its off-road traction control modes, and a system that grabs the inside brake to reduce the turning radius at ultra-low speeds, makes it far more agile off-road than it should be for its weight.

Clearly the 2020 Toyota Land Cruiser belongs off-road. It’s faultless in the wild, and has some challenges on the pavement—namely, low fuel economy and poor handling.