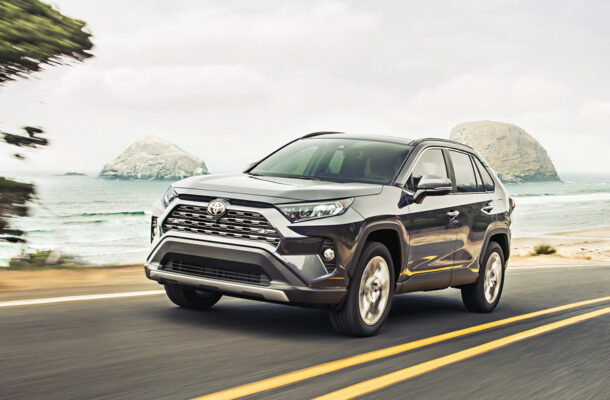 The Toyota RAV4 is one of the most popular crossovers made. The good-looking RAV4 brings the rugged 4Runner SUV and Tacoma truck looks into its compact dimensions.

For 2020 it adds a new model, the TRD Off-Road, which makes the RAV4 even more capable than it already is. The new TRD Off-Road adds twin-tube shocks, chunky 18-inch wheels with all-terrain tires, a fake skid plate, and gray exterior accents.

Since there is already a hybrid, the versatility of this little SUV with a big history is now complete, and vast.

The base engine is a 2.5-liter inline-4 that makes 203 horsepower and is mated to an 8-speed automatic. The power is fine although the engine’s refinement reaches its limit when you ask for too much from it. The ride is also fine. Four adults fit well in the cabin, although five might be a squeeze.

The RAV4 earns five stars overall for safety from the NHTSA, with four stars in front and rollover crash safety. The IIHS gave the 2019 RAV4 its top “Good” scores in all crash tests. It also named one model of the RAV4 a Top Safety Pick+; that was the most expensive model, the Hybrid Limited with an optional safety package including a front crash prevention system rated “Superior,” and headlights rated “Good.”

The front-wheel-drive LE costs about $27,000 including destination, and includes cloth upholstery, 17-inch wheels with hubcaps, a split-folding rear seat, the 7.0-inch touchscreen, Apple CarPlay and Android Auto capability (new for 2020), one USB port, and the active safety features. All-wheel drive is optional and costs $1,400.

The 2020 RAV4 is stylish without being brash, angular without being busy, and trendy without being trite. With its chunky fenders, it does a fair job of trying to look like its big brothers the 4Runner SUV and Tacoma truck.

The roof is low without pinching the windows, although a thick rear pillar compromises over-the-shoulder outward vision. The rear end is blocky, but high-mounted taillights break that up a bit.

The Adventure and TRD Off-Road models add some cosmetic pieces that suggest ruggedness.

The Hybrids have small differences in the front grille and bumpers, but are otherwise identical.

The RAV4’s different trims have different accent stitching and upholstery patterns; for example, the TRD Off-Road gets red stitching on black synthetic leather upholstery, with a red accent in the center console. The upper models use mostly soft plastics, but hard plastics on the doors of the LE and XLE models reveal their cost-savings.

The tablet-style touchscreen rides on top of the RAV4’s wide dash.

There isn’t a whole lot of head room, front or rear, especially front with the available moonroof. And the seat cushions are thin, all around. There’s 37 inches of rear leg room, which is about average for a compact crossover. The rear door openings are relatively narrow, which makes it awkward when trying to bend in and install a child’s booster seat.

The 2.5-liter inline-4 engine makes 203 hp and is mated to an 8-speed automatic transmission. It’s competent but could be more refined.

Front-wheel drive is standard, with all-wheel drive optional or standard on the Adventure and TRD Off-Road models.

The RAV4’s stiff frame and four-wheel independent suspension (MacPherson struts in front with multi-link, trailing wishbones in the rear) give the RAV4 a supple ride over rough bumps, although some compact crossovers are softer.

The all-wheel-drive Hybrid adds a nickel-metal hydride battery pack and electric motor to the engine, to make a total of 219 hp. The transmission is an electronic continuously variable transmission (CVT), which works to keep the revs low. When you stomp on the gas pedal, it growls the same as the engine without batteries.

The all-wheel-drive system in the Hybrid isn’t the same as that in the Adventure and TRD Off-Road, and it doesn’t respond as quickly. The Hybrid is heavier than the front-wheel-drive RAV4, so the ride is just as composed and calm, if not more so.

The 2020 Toyota RAV4 looks good, and has adequate power. The cabin has the latest features, and plenty of space—and the Toyota reputation for durability.