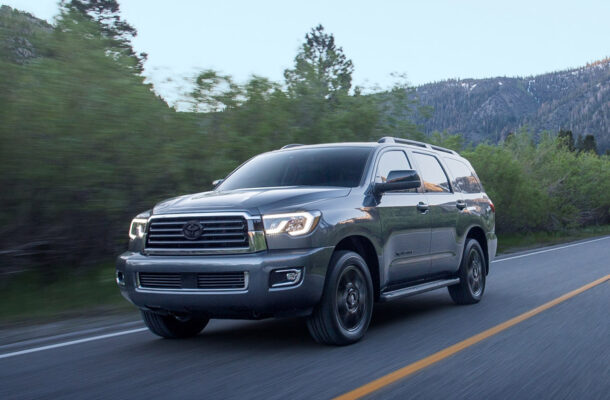 The 2020 Toyota Sequoia is a big eight-passenger SUV that’s built on the Tundra full-size truck chassis. It hasn’t significantly changed in its 12 years. For 2020 it adds a TRD Pro model that’s largely cosmetic, with all-terrain tires. The only other new thing for 2020 is that the base SR5 model gets Apple CarPlay and Android Auto compatibility.

The Sequoia is powered by a 5.7-liter V-8 making 381 horsepower. The engine is mated to a 6-speed automatic transmission that needs two or three more gears to keep up with the times. It can tow 7,400 pounds.

Not surprisingly, gas mileage is low. With rear-wheel drive, the Sequoia is EPA-rated at 13 mpg city, 17 highway, 15 combined; with optional four-wheel drive it drops to 14 mpg combined.

The Limited adds $9,000, for which you get leather upholstery and 20-inch wheels.

The Platinum can cost nearly $70,000 with four-wheel drive. It comes with a Blu-ray player, heated and cooled front seats, a heated second row, keyless ignition, and JBL speakers.

The Sequoia’s conventional big-box shape has a few curves to soften things.

The Sequoia dash has been transplanted from the Tundra. It swallows the standard 7.0-inch touchscreen, and features large control knobs and buttons.

There’s plenty of room for a family and their gear in the Sequoia, although there might not be enough room in the garage–the Sequoia’s length might be too much for some garages. There’s room to stretch your legs in the font, and more than 40 inches of legroom in the second row bench (captain’s chairs are optional). Even the third row is suitable for adults.

Running boards are standard on most models, and that makes climbing into and out of the Sequoia easier.

The Sequoia feels like what it basically is, a powerful truck with heavyweight handling and confident towing ability. The 5.7-liter V-8 makes 381 horsepower and 401 pound-feet of torque attached to the rear wheels or all four wheels with the available full-time transfer case.

The 6-speed automatic transmission delivers syrupy shifts, but most rivals have 8-, 9- or 10-speed transmissions.

The Sequoia rides on a separate ladder frame like the Tundra, and uses an independent front suspension and solid rear axle with coil springs. The old-school setup delivers a competent ride. The taller sidewalls on the SR5 and TRD Pro absorb the bumps better than the 20-inch wheels and shorter sidewalls that come with other trims.

Sequoia TRD Pros also make use of Fox shock absorbers that deliver a remarkably comfortable ride on pavement while absorbing the big bumps off-road. The TRD Pro goes four-wheeling better than might be expected for a vehicle of this size, but it’s not like the renowned Toyota Land Cruiser.

The 2020 Toyota Sequoia has big-SUV credentials with lots of towing capability and a strong V-8 engine. Fuel economy is low and the Sequoia’s technology is showing its age—but if what you need is a giant 8-passenger SUV, the Sequoia is here for you.

—By Sam Moses with Driving Impressions by The Car Connection