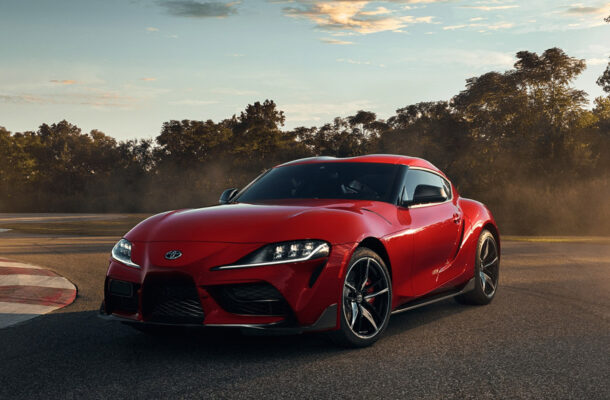 The Toyota Supra has been gone and missed from the Toyota lineup for 21 years, but it returns for 2020. It’s a rear-wheel-drive hatchback coupe using an inline 6-cylinder engine, the classic and proper engine for this car. It’s short, wide and powerful.

Agile and quick, it can accelerate from 0 to 60 mph in just 4.1 seconds. The engine is BMW’s turbocharged 3.0-liter inline-6 making 335 horsepower and 365 pound-feet of torque, mated to an 8-speed automatic. A 2.0-liter turbo-4 is expected later, and a 6-speed manual may come as well.

The Supra shares its structure and suspension with the BMW Z4. Its wheelbase is just 97.2 inches, which is 4 inches shorter than the already small Toyota 86, but it’s almost 3 inches wider than the 86.

The sports-car shape is classic, with a long hood, set-back cabin, wide haunches, and a short rear deck with a big spoiler. Less classic is the double-bubble roof. The body is sculpted with rounded organic shapes, creases for air ducts, and a nose with a horse-collar look.

The chassis is no less than what might be expected from racing designers: a stiff structure, perfect 50/50 weight balance, and low center of gravity. The suspension uses aluminum front control arms to reduce unsprung weight, a five-link rear setup also made from aluminum, and adaptive dampers.

The Supra also has an active rear differential, variable-assist and variable-ratio power steering, and 13.7-inch front brake rotors with four-piston calipers. It’s shod with Michelin Pilot Super Sport tires, 255/35R19 up front and 275/35R19 out back. Total weight is 3,397 pounds.

The cockpit features two sport bucket seats with a digital instrument panel; a color head-up display is optional. The BMW iDrive rotary dial is used to interface the standard 6.5-inch center screen; the two upper models (3.0 Premium and Launch Edition) get an 8.8-inch touchscreen and a touch version of the rotary dial.

The only option of note is the Driver Assist Package with adaptive cruise control, blind-spot monitors, rear cross-traffic alerts, and front and rear parking sensors.

The 2020 Supra shouts for attention and will be sure to receive it. Its looks might be polarizing.

It follows the theme of Toyota’s FT-1 concept car shown in 2014, with some reshaping of the curves, creases, and ducts. Because it’s shorter, it loses some of the concept’s elegance in the process, but that’s usually the case from concept to mass production. It harkens back to the last Supra, the fourth-generation car of the late 1990s.
It remains bold and dynamic, with very strong haunches that announce its rear-drive architecture, a long hood to hide (not) its inline-6, and a pushed-back cabin that hints at the perfect 50/50 front/rear weight distribution.

The nose of the FT-1 suggested an open-wheel racecar, but the Supra does away with that. The headlamps have six lenses each, three low and three high beams, as well as an LED daytime running light underneath, as a signature.There are functional ducts and scoops in the front and along the sides, to cool the engine and brakes.

Curved lines flow over the hood, up onto the double-bubble roof, and along the sides, where a character line starts at the bottom and spreads to the rear haunch with a cooling duct. It’s straight from the FT-1, but it looks stubby and is the car’s most outspoken design detail.

The roof angles down quickly to create a teardrop shape for the side windows, then meets an integrated kick-up spoiler recalls the hoop spoiler of the fourth-generation car. From the rear, thin LED taillights flow out of air ducts, and numerous lines come busily together.

The interior is much simpler than the exterior. The controls are all within easy reach.The instrument panel is canted toward the driver, properly so. The seats are snug and well bolstered, properly so.

The Supra feels like a BMW inside, as it ought to because so many parts come from BMW, including the iDrive rotary controller for infotainment and other functions. Toyota opts for all black seats and dashboard (except for the red or white Launch Edition models, which get red seats). But there are some nicely stitched soft-touch surfaces and carbon-fiber trim.

The screen on the base 3.0 model is 6.5 inches, but the other models use an 8.8-inch touchscreen, along with the iDrive rotary knob. All models have an 8.8-inch digital gauge cluster.

Both front seats are oddly angled to the left, while the adjustment in 14 directions won’t change that. If you’re taller than 6-foot-3 you’ll run out of leg room in front. The bolstering is appreciated during the hard cornering that the Supra welcomes.

There is no rear seat or jump seat behind the buckets, but there is a pass-through to the cargo space under the hatch. There’s not enough length for skis, unless they ride on the dash next to the touchscreen. And the glass on the fastback roof is so low that even a suitcase will be a tight fit. The cargo volume is 10.2 cubic feet, about the size as the trunk of a subcompact sedan.

The BMW turbocharged 3.0-liter inline-6 engine makes 335 hp and 365 lb-ft of torque. The Supra can vault from 0-60 mph in just 4.1 seconds, and is electronically limited to 155 mph. The power is always there, without turbo lag, thanks to a twin-scroll turbo that makes peak torque at just 1,600 rpm; this is a phenomenal feeling, to have power this low. The 8-speed automatic transmission delivers gearshifts quickly and neatly.

On the road, the Supra feels stable, hunkered down, and reasonably comfortable. It uses the BMW Z4’s double-joint spring strut front suspension, five-link rear suspension, and adaptive adjustable dampers with Comfort and Sport settings. Its very low center of gravity helps give it great grip and incredible agility. It darts into and out of corners, changing directions like a waterbug.

The Supra’s stability control program has three settings: On, Sport, and Off. The On setting brings the correction of a slide well before there’s trouble; with the Sport setting, on the track, the car will slide a bit before correcting; and Off is for experienced racers with great car control. If that’s not you, don’t go there.
There are also two drive modes: Normal and Sport. Each mode adjusts the traction control, throttle response, steering weight, transmission shift points, differential tuning, and exhaust sounds. The Normal mode activates a Comfort setting for the adjustable dampers that makes the Supra reasonably comfortable on the street. It soaks up road imperfections better than expected for such a short, wide, and sporty car.

We had the chance to test the Supra on an autocross course, where it comes alive with slot-car agility and immediate, rambunctious acceleration. The short wheelbase makes it playful. It’s heaps of fun to toss around. However, even on a simple and relatively slow autocross course, if you turn off the stability control the rear end will step out too far.

Back out on the track, in high-speed corners, stability becomes an issue. It doesn’t track true, and it’s fidgety in some instances as its electronic limited-slip differential locks and unlocks. Stability is not an issue under heavy braking.

The 2020 Toyota Supra benefits from its fabulous BMW powertrain, with the twin-scroll 3.0 turbocharged inline-6, and 8-speed automatic transmission. It has jowl-distorting acceleration, sleek looks that still say Supra after more than two decades, and awesome agility.