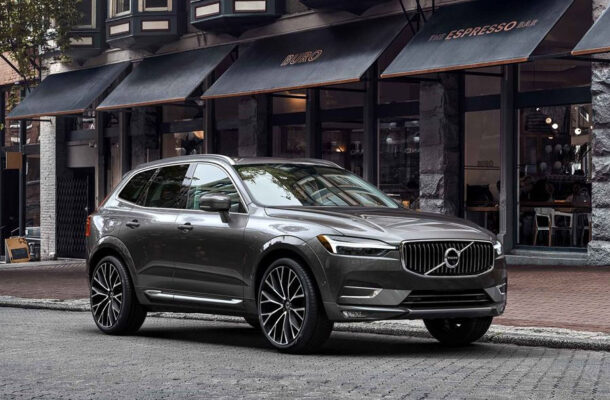 The 2020 Volvo XC60 is a mid-size luxury crossover with unwavering attention to detail, robust diversity in its powertrains, a superb cabin space, logical infotainment, and active safety technology in every model.

For 2020 the XC60 gets a digital gauge cluster, and a bigger battery for the T8 plug-in hybrid. But bigger than that, it gets a powerful new model, the Polestar Engineered XC60, a plug-in hybrid plus, with 415 horsepower.

Three powertrains are available on the XC60, starting with the T5, a 2.0-liter turbo-4 that makes a healthy 250 horsepower. It’s available with either front- or all-wheel drive and mates to an 8-speed automatic.

The T6 adds a supercharger to that turbocharged engine, which brings 316 hp and brisk acceleration. It uses the same 8-speed automatic and is all-wheel drive only.

The T8 plug-in hybrid produces 400 horsepower and 495 pound-feet of torque, by adding an 87-horsepower electric motor to the T6 engine, as well as an 11.6-kwh battery to charge things. The T8 can go 17 miles on battery power alone. The new Polestar pumps up the T8 to 415 hp.

Front-drive models with the T5 are rated at 22 mpg city, 29 highway, 24 combined, on premium fuel, and 1 less combined mpg with all-wheel drive. Mileage for the more powerful T6 drops to 19/27/22 mpg.

With its electric support, the T8 gets a bit better fuel economy, 26 mpg combined, but with its high price it will never pay for itself. Using its full 17 miles of electric range, it’s rated at 57 MPGe.
The NHTSA hasn’t fully crash tested the XC60, but the IIHS gives it their top rating in every test.

Active-safety features that come standard on the XC60 include automatic emergency braking, lane-departure warnings, and roadside recognition. Optional features include Pilot Assist, an adaptive cruise control system that can steer the car for short durations on well-marked highways, keep within its lane, and maintain a set following distance.

Blind-spot monitors are optional, as are parking sensors and a surround-view camera system.

For $48,490 the sporty R-Design adds a sport-tuned suspension with stiffer springs, 19-inch wheels, and glossy black trim, along with nappa leather seats with thigh extenders, and navigation.

For the same price of $48,490, you can choose luxury instead of sport, with the Inscription model. To the base Momentum, it adds driftwood trim, four-zone climate control, chrome trim, and signature LED lighting.

The new Polestar Engineered, with its boosted T8 powertrain, raises the price to $70,495. It adds 21-inch wheels, Bowers & Wilkins audio, and a head-up display.

The styling of the XC60 is familiar; unlike the smaller XC40, it doesn’t stray from the Volvo family dress code. Classic Volvo lines are elegant, tasteful, and not overdone.

The XC60 has the tall grille and signature headlights called “Thor’s Hammer” by the designers. The vertical taillights are probably more of a signature than the horizontal headlights with their hammer-shaped beams.

The body is upright and rounded, making the XC60 look larger than its tidy dimensions. Although when it’s parked next to an XC90, it’s clearly mid-size, not large.

Everywhere you look and touch in the impressive cabin, you’ll find high-quality materials and small details, for example a premium sound system and crystal-capped gearshift. The low center console gives the driver some elbow room. A few slim knobs and switches come off as uncluttered but not sparse.

The vertical tablet-like 9.0-inch touchscreen is front and center. It has smartphone compatibility and is refreshingly easy to use. Logical and intuitive, it’s a great system, one of the best in the business.

The XC60 is adept at hauling passengers in supreme comfort and cargo with supreme ease.

The front seats are incredibly comfortable, with just the right amount of bolstering and cushion. On the R-Design and Inscription, the seats can be heated, cooled, and massaged.

The back seat is markedly better than in your average mid-size crossover, especially if you choose the optional four-zone climate control and heated seats, for the outboard positions.

Behind the second row the XC60 offers about 30 cubic feet of cargo space. Fold it down and 50 cubic feet is available.

Though the pillars are thick, the upright profile of the XC60 provides great sightlines for both the front and rear seats. Outward visibility is excellent.

The base engine is a 2.0-liter turbo-4 that makes 250 horsepower, mated to an 8-speed automatic transmission. Front-wheel drive is standard, and all-wheel drive optional. We haven’t driven an XC60 with that T5 powertrain yet, but certainly 250 horsepower should be enough to respectably move even this heavy crossover.

The T6 adds a supercharger that raises the horsepower to 316, and we’ve gotten good seat time with that one. It’s a unique build, to have a supercharger on top of a turbocharger, and it might not be simple but it sure works. The power comes on super-early and stays there, effortlessly. But just as important, especially to sane and rational Volvo types, the engine is quiet, disappearing into the background.

Speaking of not simple, the T8 plug-in hybrid takes the supercharged turbocharged T6 and adds an 87-hp electric motor with an 11.6-kwh battery, while maintaining the 8-speed automatic. Its 400 horsepower and 472 pound-feet torque make it awesome quick and fast, and it can go 17 miles in awesome silence, running on just the battery. Using the full hybrid potential and combination–the battery, electric motor, and gas engine–it gets 57 MPGe.

The ride is nice, but an air suspension is available on the R-Design and Inscription. It raises or lowers the car on demand (up for rough roads, down for high speeds), and offers three drive modes—Eco, Comfort, Dynamic—that alter the suspension damping, steering weight, and throttle response. Of the three, Comfort fits the XC60 character best, bringing a sweet tune to its road manners.

It might be overkill to have an off-road mode, but it not only slightly increases ground clearance, it engages hill-descent control, slows way down the throttle and steering response.

The Polestar Engineered plug-in hybrid, a boosted T8 with revised engine mapping and other software upgrades, makes 415 horsepower and 495 lb-ft of torque, and can accelerate from a standing start to 60 mph in about five seconds. It gets adjustable shocks and bigger brakes, along with 21-inch wheels stuffed in wider wheel arches—and if 21-inch wheels aren’t big enough, 22-inchers are available.

With the Polestar, Volvo hammers home a point that enthusiasts have known for decades, ever since its success in the early ‘80s with road-racing versions of its station wagon: When it wants to be, Volvo can be a master of high performance.

The 2020 Volvo XC60 presents crossover buyers with a serene, sublime choice in the luxury price ranks. The T6 is great at all-around duties; the T8 plug-in hybrid is simply great