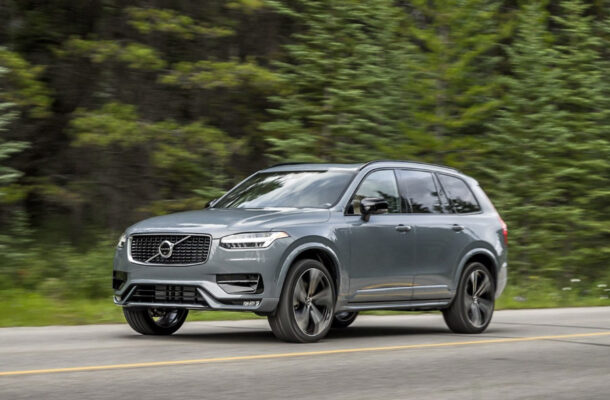 The 2020 Volvo XC90 is a stylish standout among three-row luxury SUVs. It has a good looks, a handsome and practical interior, a supple ride, and impressive technology and safety. Its base T5 engine, which is fine in Volvo’s smaller SUVs, is short on horsepower to carry the heavier weight of the XC90; however there is a T6 version with plenty of horsepower.

For 2020, the middle of its life cycle, the XC90 gets some changes, inside and out. It gets a 12.3-inch digital gauge display, Android Auto capability, the availability of second-row captains’ chairs, and a new system to prevent the vehicle from drifting into opposing traffic. The plug-in hybrid model gets more battery power that increases its electric range to 19 miles.

The exterior changes are barely noticeable. Distinctive LED headlights and sharp wheel designs make the XC90 look even more upscale than it is.

Base models get the turbo-4 T5 with 250 horsepower and front-wheel drive, with all-wheel drive available. The T6 adds a supercharger to the turbocharger, and makes 316 horsepower. There’s also a T8 plug-in hybrid model with two electric motors, making a combined 400 hp.

The third row is actually adult-sized, without stealing from cargo space, giving the XC90 an edge over rivals. The high roof means good head room. The cabin offers some luxury touches such as open-pore wood and a crystal shifter on the hybrid.

The NHTSA gives the XC90 five stars overall for safety, with four stars for the rollover rating, typical for taller SUVs. The independent IIHS gave the 2019 XC90 its top “Good” scores for every crash test, while the standard headlights were considered “Acceptable.” It received a Top Safety Pick award.

The models are Momentum, R-Design, and Inscription. Any one of the powertrains is available with each model.

The R-Design costs $57,095 and comes with black leather and aluminum trim in the cabin, and sporty trim and wheels on the outside.

The Inscription costs $63,595 and comes with perforated leather and open-pore wood. Options include heated and cooled front seats with massage, and a Bowers & Wilkins or Harman Kardon system (the Bowers & Wilkins system steals the show).

The plug-in hybrid T8 model starts at $67,995 in Momentum trim, but it also comes as R-Design or Inscription.

The XC90 ushered in a new age of Volvo design, and still looks as good as the day it was drawn. It has sharp lines, and careful details like handsome wheels, and front and rear light signatures. It’s one of the best-looking SUVs on the road.

Inside, the XC90 practices Scandinavian minimalism, blending simple lines with light and airy materials that are sometimes too much so, for example the door panels, center console sides, and cupholder covers. However most of the leather, metal, wood, and soft plastics pass the touch test.

The Sensus infotainment system is tablet-like, but can be difficult to use while on the move.

The XC90 can seat seven comfortably. The front seats are comfortable, while the rear bench seats are a little less supportive. They’re roomy enough for three adults, while two captain’s chairs are available. The stand-alone third row is better than most.

Volvo’s packaging is impressive. The XC90 feels much smaller than a Cadillac Escalade or Lincoln Navigator (also a lot less expensive), but it has nearly as much cargo space.
Behind the third row, there’s 15.8 cubic feet. With that row down there’s 41.8 cubic feet, and with both rows folded flat there’s a cargo-van-like 85.7 cubic feet.

The XC90 isn’t a performance SUV, and can’t run on the back roads with those that are. Instead, it’s incredibly comfortable.

The base T5 powertrain is a 2.0-liter turbo-4 with front-wheel drive and an 8-speed automatic transmission. Though its 250 horsepower and 258 pound-feet of torque is enough to get the job done, a 4,500-pound curb weight hampers acceleration. The T6 engine gets a supercharger to go with its turbocharger, bringing 66 more horsepower for a total of 316 hp and 295 lb-ft. All-wheel drive is standard with the T6, making it even more compelling.

The T8 plug-in hybrid has a new 11.6-kwh battery that boosts its electric-only range to 19 miles on a full charge. It makes 400 combined horsepower, and can accelerate to 60 mph in less than six seconds.

The XC90’s steering is light and direct, and it manages body roll well for a tall SUV. The optional adjustable air suspension is very smooth, but even the standard springs are pleasant enough.

The 2020 Volvo XC90 is the class of the field among three-row crossovers, with the T6 drivetrain. It has clean styling, a handsome cabin, a supple ride, solid seating for seven, and impressive cargo space.