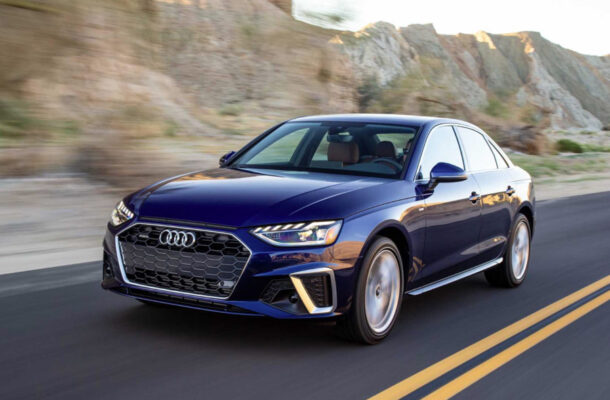 The 2021 Audi A4 is a compact luxury sedan or Allroad wagon that still delivers on the same values that made it such a success over more than two decades: ample amenities, quietly handsome styling, and buttoned-down performance. Its stoic persona remains intact even after all these years of success.

Changes are minimal for 2021. The base powertrain now comes standard with all-wheel drive. All models but the S4 gain 13 horsepower due to a new 12-volt mild-hybrid system. Wireless Apple CarPlay and an integrated toll transponder have been made standard.

There’s nothing new in the powertrain department, where a 2.0-liter turbo-4 continues to hold sway under the hood. Base models use a 201-hp turbo-4 known as the 40 TFSI, but buyers can opt for a 261-hp variant known as the 45 TFSI. Both tunes use a 7-speed dual-clutch automatic that sends power to all four wheels.

Speed freaks will want to check out the S4, which tosses aside the turbo-4s in favor of a 349-hp turbo-6. It pairs to an 8-speed auto and all-wheel drive; all this hardware opens the door to 4.3-second 0-60 mph runs.

The IIHS and NHTSA both affirmed the crashworthiness of the A4, with the NHTSA awarding it a five-star overall rating and the IIHS naming it a Top Safety Pick.

All prices include a $995 destination charge. Base prices are only representative of sedans; for Allroad models, add about $5,000 to all listed prices.

The cheapest A4 is the Premium, which starts at $40,095 for a 40 TFSI model or $41,895 for the 45 TFSI model. Standard equipment includes a 10.1-inch touchscreen with standard Apple CarPlay and Android Auto compatibility, heated front seats with power adjustments, leather upholstery, a moonroof, ambient lighting, and three-zone climate control.

The Premium Plus begins at $44,795 ($46,095 for the 45 TFSI) and adds wireless smartphone charging, keyless entry, an all-digital instrument cluster, blind-spot monitors, and parking sensors.

Moving into the Prestige costs $50,395 ($51,795 for the 45 TFSI). The upcharge buys luxuries like navigation, a 19-speaker Bang & Olufsen audio system, heated and cooled front seats, and a head-up display.

S4 models are similarly equipped to their A4 counterparts but get exclusive performance upgrades. Prices range from $50,895 to $59,195.

The A4 is among the most timeless of any sedan on sale these days. Still, the A4 still has shades of the Volkswagen Passat in its roofline and body sides that become apparent when approached from certain angles.

Yet from other vantages the Audi is all grace and elegance. Take the front, for instance: the big Audi grille pleasantly fills in the front end and defines precisely who builds this sedan. Flanking that aperture are slim headlights and a pair of bumper-mounted air dams that, taken together with the grille, make for an aggressive yet handsome design.

Circle around to the back and you’ll find a similar story. It’s the horizontal plane that is most accentuated here, with slim and wide taillights and strong horizontal creasing along the bumper. The A4 isn’t all that big or wide, but the rear end certainly makes it look otherwise.

Critics can justify calling the exterior too tame, but that won’t fly in the cabin. Audi has seemingly spared no expense in ensuring the interior is up to snuff for the segment, with most materials soft-touch or upholstered. Even the plastic switchgear feels substantial.

Infotainment has become the hotspot of car interiors among consumers, and spending some time with Audi’s setup shows the brand is well aware of this. The 10.1-inch touchscreen runs the latest version of the Audi MMI system, which is now entirely haptic rather than controlled via a console-mounted rotary dial.

As good as the dial was, we think going touchscreen was a smart move. Swiping and tapping come more naturally these days than swiveling and clicking. The software itself is quick to respond and easy to learn; what could’ve been a maze of menus and submenus is instead a logical, intuitive system that puts everything where you expect it.

The interior is as comfortable as it is well-built. Even the base seats are heated, leather wrapped, and power-adjustable. We found them firm but forgiving, bolstered but not snug. It would be easy to do a day behind the wheel in these thrones, yet they would also suffice during spirited driving.

The back seat isn’t quite so lavish as the front, but offers a class-competitive 35 inches of leg room. The transmission tunnel makes the third passenger ride high on the seat. Best to consider it a four-seater, with the fifth seat handy in a pinch.

The sedan’s trunk measures 13 cubic feet, but the wagon is the star in this regard: 24 cubic feet of cargo area behind the second row or a crossover-beating 60 cubic feet with the seatbacks folded.

If there’s any word to describe an Audi product, it’s solid. It doesn’t matter the speed or the road surface – the sense of solidity is palpable. The A4 is no exception. Take it over washboards, run it down a forest road, or simply cruise at three-figure speeds for a spell on the interstate. No matter: this German sedan always remains unperturbed. In that sense, the A4 is more like a luxury SUV than a sports sedan. A sense of high-dollar heft abounds.

And yet it still has moves. Dialing the drive selector to sport and throwing the 7-speed into manual mode is all it takes to feel the A4’s personality begin to filter through. Even then the tactile sensations are still largely damped through the seat and the wheel, but nonetheless you can sense that the A4 is no poseur. It turns into corners with surprising alacrity and the dual-clutch transmission is happiest when being hustled.

The base engine, a 201-hp 2.0-liter turbo-4, is a fine entry-level piece. Its seven-second 0-60 mph sprint is entirely fine for its pricing and positioning, and it doesn’t have any particularly egregious character flaws. Anyone buying this as a city car or urban runabout will be more than happy with this powertrain.

That said, our choice remains the optional 261-hp turbo-4 (standard on Allroad). This high-output version is well worth the small price bump: not only does it cut 0-60 mph launches to 5.5 seconds, it gives drivers that sense of confidence that only comes with some chutzpah under the hood. The 261-hp output makes maneuvers like darting through a gap in traffic or gunning up a short on-ramp feel much more doable.

While on the topic of higher-powered engines, the S4 models run a 349-hp turbo-6. In short, this model is glorious overkill. Its 0-60 mph run takes just 4.4 seconds; stay on the throttle and eventually you’ll hit 155 mph. An 8-speed dual-clutch automatic bangs off gearchanges with vengeance.

The 2021 Audi A4 continues to be a sterling choice in compact luxury cars. Handsome styling and compelling powertrain options perfectly pair with the luxurious interior to make the A4 feel like a proper highbrow sport sedan (or wagon). We’d have ours decked out in Premium Plus trimmings.