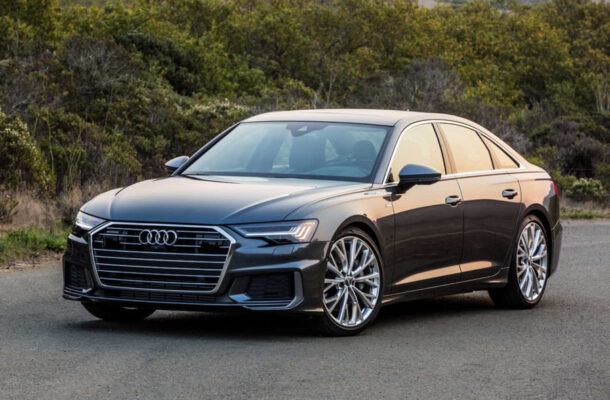 The 2021 Audi A6 is a luxury mid-size sedan that keeps with tradition. Its familiar three-box design and conservative styling is a refreshing antidote to dramatically styled crossovers that have largely taken over the market. There’s also a wagon variant for those who prefer their family runabouts low and long as opposed to tall and tippy.

More standard features come to the 2021 models. Base Premium models now get 19-inch wheels, keyless entry, and an integrated toll transponder. Adaptive cruise control has been made standard on the mid-tier Premium Plus models. Top-of-the-line Prestige trims now include power rear sunshades.

More exciting news surrounds the wagon, which is now being offered in fire-breathing RS guise. Audi saves the RS moniker for the most potent variants of a given model, and the RS6 Avant is no exception to that. Between its bulging front fenders lies a 4.0-liter twin-turbo V-8 that thumps out a full 591 horsepower. Don’t expect to bring one of these home for less than $110,000, however.

Those whose budgets are a bit more modest than that will want to start their shopping with the base powertrain, known as the 45 TFSI. This 2.0-liter turbo-4 engine has been upgraded this year with mild-hybrid tech, which boosts output to 261 hp. A 7-speed dual-clutch automatic transmission and all-wheel drive help the 45 TFSI-powered A6 pull off 0-60 mph sprints in a brisk 6.1 seconds.

Splitting the difference between the performance models and the turbo-4 is the 55 TFSI. This refers to a 3.0-liter turbo V-6 that makes a healthy 335 hp. Like the base engine, the 7-speed transmission and all-wheel drive both come standard.

Standard active-safety equipment is limited to automatic emergency braking, though Premium Plus models add adaptive cruise control with active lane control. The sparse list of standard safety features is balanced out by the excellent safety ratings from the IIHS and NHTSA: the former called the A6 a Top Safety Pick Plus, while the latter awarded it a five-star overall rating.

All prices include $995 destination charge.

The cheapest A6 is a 45 TFSI sedan in Premium trim, which starts at $55,895. Standard features include leather upholstery, 19-inch wheels, and dual touchscreens (an 8.8-inch touchscreen with navigation and Apple CarPlay and Android Auto compatibility, and an 8.6-incher for climate controls).

The Premium Plus starts at $59,895 and adds a 10.1-inch touchscreen, premium audio, a 12.3-inch digital instrument cluster, adaptive cruise control, and upgraded headlights. This is the base trim for the Allroad and the S6, which start at $66,895 and $74,895, respectively.

The A6 Prestige includes niceties like heated and cooled front seats, a head-up display, four-zone climate control, and LED matrix headlights. Those versions range in price from $65,895 for a turbo-4 sedan to $82,095 for an S6.

The RS6 Avant sits at the head of the A6 family dinner table. For $109,995, this 591-hp family chariot gets all the features found on Prestige models as well as 21-inch wheels and exclusive trimmings inside and out.

In today’s era of highly-styled crossovers, the handsome A6—low, formal, elegant—is a refreshing sight. It continues to promote the long-standing appeal of the sedan, even as buyers move away from the body style. Though high-riding rigs have become the new normal, the stylish A6 continues to make a strong visual case for why the sedan still has a place in today’s market.

A lot of what makes the A6 such a standout is in the details. In the back, horizontal design themes strongly suggest a low, wide stance. The body looks slab-slided at a glance, but a closer look reveals subtle sculpting, with big fenders flowing into a taut, mildly concave midsection. In the front is the iconic Audi visage: big hexagonal grille, thin headlights, and two gaping air intakes at the bottom corners of the front bumper.

The Allroad wagon has an enhanced sense of length compared to the A6 sedan. And the RS6 Avant? It’s an Allroad after six months of intense gym workouts: more muscular, more defined, and significantly more menacing.

Like other Audis, the A6 strikes a fine balance between luxury, technology, and elegance. It doesn’t try to dazzle with style, and nor does it crudely boil things down to their essence. The Audi interior design ethos is more akin to that of a mid-century modern house: sparse ornamentation mixed with organic styling for something timelessly elegant. Unsurprisingly, build quality and material choices are top-notch.

The software underlying both screens is Audi’s MMI technology, which effectively balances ease of use with comprehensive features. It’s a favorite of ours among the various infotainment systems currently on the market.

The A6 is a five-seater, even in wagon guise (unlike the Mercedes E-Class wagon, which still retains a pair of rear-facing jump seats in the way back). The most comfortable place is up front, where a generous glass area and multi-way adjustable power seats provide plenty of visibility and comfort.

That doesn’t make the back seat second-class, though. The rear seats still offer 37 inches of legroom, and the upright roof and big side glass provide a sense of airiness often missing in modern cars.

Wagons are the cargo-space maestros, with 30 cubic feet behind the rear seats and about double that with the seatbacks folded. Sedans have just 13.7 cubic feet of trunk space; while small, that’s still more than the bigger A8.

Every A6 variant has its own character; the RS6 leaves a much different aftertaste than an A6 with the turbo-4. Yet for all their differences, every member of the family is about as unflappable as anything else in the Audi lineup. All A6s are smooth and stable even at losing-your-license speeds.

Turbo-4 models, being the weakest here, won’t raise your pulse even when you push it hard. Its 6.1-second 0-60 mph time is brisk, but there’s faster competitors out there. The 261 hp is more than enough to handle around-town driving and long highway stints, however, and if there’s ever a need for a quick dose of acceleration the turbo-4 is quick to provide it.

The turbocharged V-6 is more our speed, however, and would be our choice of the lineup. Its 335 hp doesn’t sound like much in 2020, but from behind the wheel it is plenty. There’s an abundance of power quietly waiting just under your right foot. It’s a strong, confident engine that is highly refined both in its mannerisms and power delivery.

The S6 is both subtle enough to blend into traffic and dramatic enough to wake all the neighbors with a few blips of the throttle. That breadth to play nice or play fierce is something we love even more than its impressive 444 horsepower. We also can’t help but grin at the sounds coming out the quad-pipe exhaust, which clearly identifies this car as something special. From behind the wheel there’s no doubting it.

The RS6 in a word? Visceral. This thing is a beast with guts big enough to hold a family of five and their luggage. One rip around the block in the RS6 and you’ll be staggering out with the same sloppy steps and giddy smile as if you just disembarked your favorite roller coaster. It is fast, mean, tenacious, and goading. Mercedes better watch out: for the first time in a long time, the AMG E63 wagon has some serious competition.

Suspensions vary by powertrain, but we like the adaptive dampers available on the V-6-powered models. Multiple drive modes are available on all models that can change the demeanor of the A6, but they never seriously alter the baseline stoic character of the A6 (RS6 notwithstanding). An available rear-steering setup makes for tighter handling, but the physics-defying tech still feels a bit disconcerting.

Audi has perfected the luxury mid-size sedan formula with the 2021 A6. It looks good, drives fine, and is topped off with plenty of luxury features. Buyers in this space would do well to keep it in mind. We’d specifically recommend a Premium Plus with the 3.0-liter V-6.