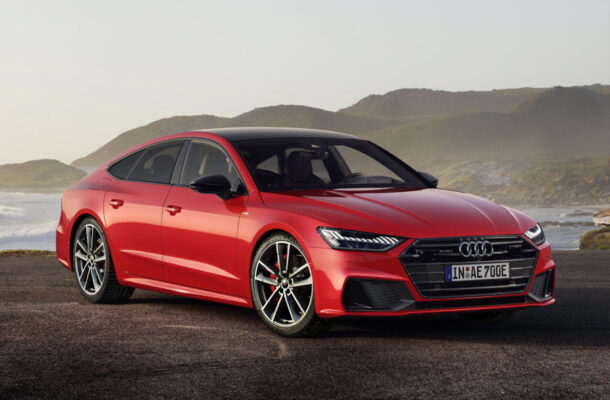 Not quite a sedan and certainly not a wagon, the hatchback 2021 Audi A7 is a stylish outlier in the Audi lineup. It rightfully flaunts its position as a luxury car that is equal parts practical and pretty.

This year brings only a few changes to the A7; 20-inch wheels are now standard, and a few options packages see a slight change in content. Otherwise, all looks the same as 2020.

A7s continued to be powered by a 3.0-liter turbocharged V-6 that makes 335 horsepower and 369 pound-feet of torque. A 7-speed dual-clutch automatic transmission and all-wheel drive round out the powertrain. All told, 0-60 mph can be done in 5.2 seconds.

Both variants use a 48-volt electrical system as opposed to the standard 12-volt setup. The extra voltage helps power the extended start/stop system that allows for engine-off highway cruising and other mild-hybrid benefits.

The only standard active-safety feature on the A7 is automatic emergency braking, but move past the base trim and you’ll also get active lane control, adaptive cruise control, a surround-view camera system, and blind-spot monitors.

The IIHS was impressed enough by the A7’s crashworthiness to name it a Top Safety Pick; they also praised the car’s automatic emergency braking, rating it “Superior.” The NHTSA hasn’t rated the A7 just yet.

For $70,195, the base A7 Premium is well-equipped with newly standard 20-inch wheels, a panoramic sunroof, leather upholstery, heated front seats, and dual touchscreens for infotainment and climate functions. Navigation is also standard, as is wireless Apple CarPlay (Android users will still need a wired connection).

The $75,345 Premium Plus adds a number of desirable features, such as a 12.3-inch digital instrument cluster, 10.1-inch infotainment screen, numerous driver-assistance features, premium audio, and a surround-view camera system. An S7 Premium Plus is $85,395.

Looks aren’t everything, but the styling of the A7 sure doesn’t hurt its chances with shoppers. It’s clear Audi didn’t get the message that hatchbacks shouldn’t look this good.

A lot of the Audi’s visual appeal comes from that long, tapered roof that gracefully makes its way from its zenith at the top of the windshield down to the rear bumper. Taken with the slightly bulging fenders and taut midsection, the A7 nearly looks like some sort of four-door, high-end sports car—and just like the best of that breed, it oozes graceful sportiness.

Spend some time in a recent Audi—particularly one on the more prestigious end of the spectrum—and you’ll be spoiled with first-rate switchgear, excellent build quality, and a plethora of features. The design smartly represents the intersecting tenets of style, function, and distinction.

At the forefront of the cabin is a pair of touchscreens for directing the infotainment and climate controls. The upper screen is for infotainment and measures 8.8 inches on Premium models and 10.1 inches elsewhere; the lower screen is 8.6 inches and takes care of climate settings. Both screens use Audi’s MMI software.

That MMI is one of our favorites among today’s systems. Crisp graphics and excellent color contrasting make it easy to read at a glance, and the system is designed with an eye toward simplicity. You quickly learn where to touch and swipe in order to get to a specific menu.

Every seat in the A7 is first-class, but our favorite is up front behind the wheel. Snug and firm but not too much so, these seats offer excellent support for all-day driving. Adjustability ranges from eight to 18 different ways. Heated seats are standard, and cooling and massaging seats are both optional as well.

Despite the sloping roof, the rear seat retains decent head room, and there’s plenty of legroom. Cargo space is where the A7 excels, however: the hatchback design allows for 19 cubic feet of cargo under the rear glass and up to nearly 50 cubic feet with the rear seats folded.

In today’s age of four-figure power outputs and two-point-something-second 0-60 mph times, 335 hp and 369 lb-ft of torque and a 0-60 mph time of 5.2 seconds won’t have anyone drooling. Yet the numbers don’t tell the whole story. Drive it and the A7 feels far more potent than it would have you realize.

Credit the eagerness of the engine to build power and the impatience of the gearbox to send that power to the pavement. The two work in perfect tandem, and we especially like the rapid-fire shifts of the dual-clutch transmission. Standard paddle shifts let you take control, and though the computer is invariably smarter than you at timing shifts, we still recommend taking the reins. It’s no manual, but there’s a certain joy to pulling the paddle and hearing a downshift crack off with military precision.

The independent suspension is a willing player when you want to have some fun, and the steering is quick and well-weighted, though lacking in feel. Talking of steering, there’s an optional rear-steer option that can turn the back wheels up to five degrees for more immediate cornering. The system works as intended, but can be disconcerting at first. It’s definitely helpful in tight parking lots, however.

The S7 takes all the above and ratchets it up a notch or three. There’s more immediacy, more emotion, and more plain old fun with the S7’s twin-turbo, 444-horse V-6. For those who can afford its asking price, we say go for it.

Equal parts fast, stylish, and luxurious, the 2021 Audi A7 has nary a fault worthy to pick at. It continues to age with grace and flaunt its good looks, and no doubt sways a few buyers who would otherwise want an A6 or perhaps even the A8. If you decide to heed its siren song, we recommend an A7 in Premium Plus guise.