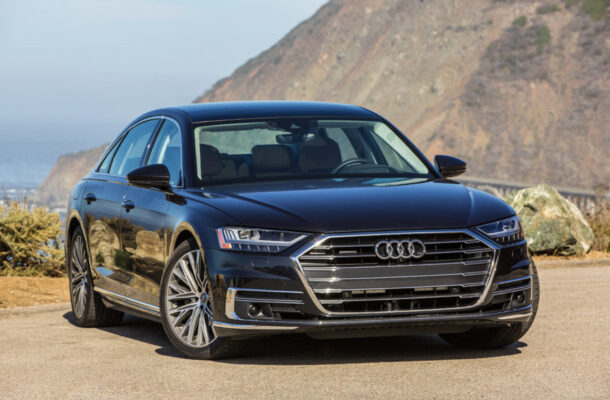 The 2021 Audi A8, a full-size luxury sedan that deftly combines tradition with technology, is a subtle moonshot. Though its styling is as subdued as anything else in the Audi lineup, the A8 is brimming with the sort of lavish features that distinguish the flag-bearers from the best-sellers.

Having been redesigned just two years ago, the A8 largely stands pat for 2021. The big news this year is the newly standard 22-way seats, surround-view camera system, and the Audi phone box, that last bit referring to a wireless phone charger and signal booster. The sporty S8 gains a few features itself: 21-inch wheels, heated armrests, and Valcona leather now come standard. Other changes are limited to small shake-ups within the various available packages.

The entry-level A8 is motivated by a 3.0-liter turbo-6 that generates 335 horsepower and 369 pound-feet of torque. A 48-volt electrical system juices the mild-hybrid system and all the power accessories. An 8-speed automatic swaps gears and directs the engine’s power to all four wheels via an all-wheel-drive system. The EPA anticipates fuel economy of 17 mpg city, 26 highway, 21 combined.

The most efficient A8 is the plug-in hybrid, known as the 60 TFSI e. These models add a battery and electric motor to the 3.0-liter V-6 to come up with a combined 443 horsepower and 516 lb-ft of torque. The 8-speed auto, 48-volt electrical system, and all-wheel drive are all part of the package. Buyers can expect about 17 miles of all-electric range and 54 MPGe combined.

If that isn’t fast enough, the S8 is also available. This high-performance model turns up the wick on the V-8 models to the tune of 563 hp and 590 lb-ft of torque. Gas mileage is an abysmal 13/22/16 mpg, but it compensates by being the fastest one here thanks to a 3.8-second 0-60 mph time.

Optional safety equipment includes blind-spot monitors, a head-up display, and night vision. The optional adaptive cruise control has stop-and-go functionality and can maintain a set following distance while keeping itself positioned in its lane. It also can automatically adjust the speed depending on upcoming road conditions; if, for example, the GPS data suggests a sharp corner is approaching, the cruise control system will slow the car accordingly without any input from the driver.

Due to low sales volume, neither the NHTSA nor the IIHS has crash-tested an A8.

For $96,895, the 60 TFSI e model uses a plug-in hybrid variant of the base 6-cylinder. Standard features largely mirror that of the TFSI 55 model.

Dropping the “e” suffix results in the V-8-powered 60 TFSI. Its $99,895 base price includes features like matrix-design LEDs and sportier-looking exterior trim.

At the top is the S8. It starts at $131,895 and gets the 563-hp V-8, 21-inch wheels, a head-up display, power sunshades, and sport seats. It also comes with an adaptive, predictive suspension that uses GPS data to determine upcoming road conditions and adjust accordingly.

At a glance, this six-figure sedan doesn’t look much different than an A4 that was scaled up a size or three. Like all Audis, the A8 has a big yet softly-spoken hexagonal grille and plain body sides with few character lines. Its size makes it stately, but don’t expect it to turn heads like an S-Class.

The proportions are typical for a sedan: a defined trunk, a good-sized hood, and a roofline that is about as formal as you’ll find in 2020. Whether shoppers find it handsome and elegant or a bit too plain-Jane will depend on their own predilections regarding showing off or blending in. But there’s no arguing that the overall look is conservative more than anything else.

As unassuming as the outside styling is, the interior is another story altogether. The cabin is decorated with the finest materials and trims, all of which weave around the two touchscreens that dominate the dashboard.

As expected for a car of this caliber, there is no lack of comfort, front seat or back. Front passengers get 22-way seats and soft Valcona leather with quilting and perforations as standard equipment; massaging seats are optional. Either way, your backside can be heated or cooled.

The backseat is no less sumptuous. Some 44 inches of leg room allow for plenty of space to stretch out. Though the A8 comes standard with a three-across rear bench seat, there’s an $7,750 Executive Rear Seat option that deletes the middle perch for two heated, cooled, multi-way power adjustable rear chairs. Did we mention they also massage your feet? For entertainment, two tablets are also included. It’s about as close to private-jet accommodations as you can get on a road car.

Infotainment is handled by two touchscreens stacked upon each other in the center stack. The upper screen measures 10.3 inches; the bottom is an 8.6-inch affair. Other than a volume knob, buttons have been banished. Everything must be adjusted via the haptic system. Luckily Audi’s MMI software is one of the better systems on the market, so despite the initial learning curve it doesn’t take very long to become familiar with it.

Cargo space is about the only weak point here. At just 12.5 cubic feet, the trunk of this mega-cruiser is hardly bigger than some compact sedans. Four executives and their attache cases is about the max this car can carry.

All A8 models save the S8 drive with regal aloofness; this is a car that shuts away the world as soon as the doors are closed. A more silent cabin you will be hard-pressed to find.

The multiple drive modes purport to offer more sportiness, but we found that leaving the selector in Comfort is most in line with the character of the A8. It neuters feedback and lightens the wheel, but who cares? Within the A8 family, only the S8 cares about performance. The more important attribute here is effortlessness: effortless power, effortless maneuverability, effortless comfort. At this the A8 excels, with special thanks to the light steering, adaptive dampers, and abundant power.

As for abundant power, that’s the case with any of the powertrains here; even the base engine isn’t a loafer. Still, we’d opt for the V-8. Besides having the most power here short of the S8, the V-8 has the character that befits such a sedan. It pulls up to speed with gusto, and what little sound makes it into the cabin is sultry and satisfying.

The S8 is another beast entirely. With an eye on performance, the S8 wrings 563 hp from its V-8. That power hits the pavement via summer tires wrapped in 21-inch wheels. Compared to the A8, the S8 makes more noise and feels more immediate; it eliminates that sense of isolation that marks the standard A8. And let us not forget that 0-60 mph happens in less than four seconds. Do we like it? Well, how could we not? It’s a fun thing, almost scary fast for how big it is.

The 2021 Audi A8 is a fine interpretation of the full-size luxury sedan: big, imposing, quiet, regal, and extremely well-appointed. For those who want the best but don’t want to flaunt it, the A8 is a fine choice. Our choice is an easy one: nothing but the V-8-powered 60 TFSI will do.