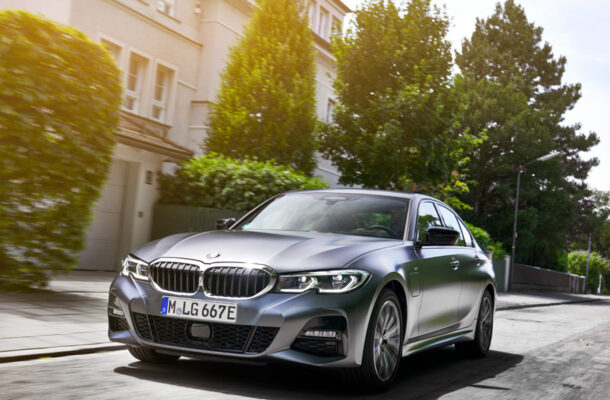 The 2021 BMW 3-Series is a compact luxury sedan that’s been a benchmark for decades thanks to the thrust under its hood, good handling, a composed ride, an excellent interior, and conservative styling.

Other changes for 2021 are small, including standard lane-departure warnings on all models, and some changes in available trim.

The base 330i uses a 255-hp 2.0-liter turbo-4 that’s either rear-wheel drive or all-wheel drive in the xDrive versions, and is mated to an 8-speed automatic transmission.

The new M3 is a beast with a turbo-6 making as much as 503 hp, using an 8-speed automatic or 6-speed manual gearbox.

BMW says to expect 75 MPGe from the 330e, or 28 mpg combined. The EPA estimates the electric-only range to be about 22 miles.

The M340i sedan can achieve as much as 32 mpg on the highway.

The M3 hasn’t been EPA-rated yet, but BMW estimates 23 mpg highway.

The 2021 has aced its crash tests so far. The IIHS calls the 3-Series a Top Safety Pick. Automatic emergency braking is standard, although other safety equipment is optional and expensive. For example, upgraded LED headlights, and adaptive cruise control that allows limited hands-free driving.

With BMW, options always drive the cost up. For example, the Driving Assistance Professional Package adds safety and self-driving equipment, but requires other options that can push the 330i to nearly $50,000. Other options for the 330i include Adaptive M Suspension and the M Sport trim package.

The M3 offers a Competition Package for $3,000 that adds 30 horsepower, a firmer suspension, and an automatic transmission. The M3 comes standard with a 6-speed manual gearbox.

An M3 Competition with all the bells and whistles like matte finish paint, carbon fiber seats, driver assistance features and more, can run nearly $105,000.

The standard 330i and M340i are clean and conservative, with good detailing. The M340i is a little chunkier with the body kit, but doesn’t scream for attention like the M3, with its gaping snout.

The cabin of the 3-Series generally makes it feel worthy of its price. Synthetic leather is standard, while real leather is about $1,500 more. There’s a low dash with digital displays in front of the driver and atop the center stack. A sliver of wood or aluminum trim dresses the cabin, along with ambient lights. The 8.8-inch touchscreen incorporates a lot of technology, including Apple CarPlay and Android Auto compatibility.

The trunk is quite big for a compact car, with 17 cubic feet of space.

The M340i uses 3.0-liter turbo-6 good for 382 hp and 360 lb-ft of torque; as with the turbo-4 models, it’s rear-wheel or all-wheel drive, mated to an 8-speed automatic. This gem of an engine is totally composed while delivering epic grunt. It can hustle the all-wheel-drive version to 60 mph in a tick over four seconds.

The handling of any BMW 3-Series is excellent, with a double-joint front strut suspension and five-link rear. Most of our seat time is with cars equipped with the optional adaptive dampers and M Sport setup with a lowered ride height and sportier tires.

The ride with the standard suspension is plenty compliant. But the standard all-season run-flat tires don’t ride as well as the optional conventional tires, which also provide more grip that’s useful on winding roads.

Still to come: the new M3, with an awesome 473 hp and an available 6-speed manual transmission—or for another $3,000, 30 more horsepower in the Competition Package. BMW says to expect 60 mph in under four seconds. If you really want to go big (as in $8,150 big), you can add carbon-ceramic brakes and an M Driver’s Package, which raises the top speed through electronic tuning, and includes a one-day driving school at a BMW Performance Center.

The 2021 BMW 3-Series comprises four very different cars. Base 330i sedans are great cars with few weaknesses. The new plug-in hybrid offers all-electric driving, while the 340i offers a more electrifying driving experience. For a mind-blowing cruise, the M3 has it all: more than 500 hp and whip-crack handling.