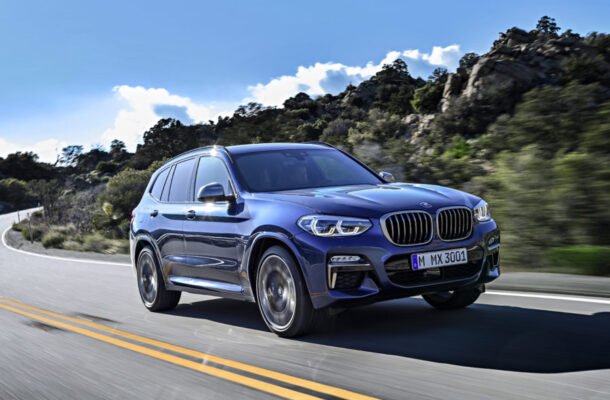 The 2021 BMW X3 is a small and sporty crossover SUV with a plug-in hybrid version that was added in 2020. For 2021, it gets more standard safety equipment, and adds Android Auto to its existing wireless Apple Car Play. The Competition model has been converted to a $7,000 package.

Made in South Carolina, the X3 is luxurious and spacious. It’s also tech-heavy, with a big infotainment screen and gesture controls for the audio system.

The base engine in the X3 is a 2.0-liter turbo-4 making 248 hp. The sDrive30i is plenty quick with rear-wheel drive, while the xDrive30i has all-wheel-drive. The plug-in hybrid xDrive30e uses a version of that engine with an electric motor and lithium-ion battery pack.

Most versions of the X3 will average 25 mpg or higher, while the plug-in hybrid is EPA-rated at 24 mpg combined, or 60 MPGe, with 18 miles of electric-only range.

The X3 gets top crash-test scores from the NHTSA and the IIHS. For 2021, its standard automatic emergency braking is complemented by lane-departure warnings, blind-spot monitors, and rear cross-traffic alerts. Adaptive cruise control is an expensive option.

As far as styling goes, the X3 might be more conservative than any other BMW in the showroom. That’s not to say there is no flair to the design, as the grille is chunky, while the bigger wheels—19 inches or more—fill out the wheel wells with authority. The M40i or X3 M wear more muscular looks, with even larger wheels.

The upscale cabin is laid out carefully and looks nice, with big screens and a central controller. There’s a wide range of available trims and shades of upholstery, in standard synthetic leather or optional real leather.

The 2021 X3 can fit in any garage, but it’s still quite roomy inside. Four 6-footers can ride in comfort, and a fifth small person might tolerate the rear middle seat without too much complaint. There’s 36 inches of rear leg room.

Cargo space behind the second row is about 30 cubic feet, and more than doubles when the seat is folded forward.

The base X3 sDrive30i is rear-wheel drive, but most versions of the X3 come with all-wheel drive, which is good for snow, ice, mud, or safer traction in the rain, but not for off-roading. The 30i uses BMW’s excellent 248-hp 2.0-liter turbo-4, mated to an 8-speed automatic transmission. It’s a great powertrain, thanks especially to the slick transmission.

The plug-in hybrid xDrive30e adds to this engine an electric motor and 12-kwh lithium-ion battery pack, to make a total of 288 hp and 310 lb-ft of torque. Despite the extra weight it’s quicker, which can be felt under passing, when the electric motor delivers its terrific thrust. A switch on the console turns it into all-electric mode, with a range of 18 miles, when putting around town.

All X3s have a comfortable ride, with sharp steering that is well-weighted. Braking is strong, though the xDrive30e’s regenerative system can feel artificial.

The X3 M40i has an entirely different personality. It’s much faster, with its twin-turbo inline-6 engine making 382 hp. It can accelerate from 0-60 mph in less than 4.5 seconds.

The X3 M squeezes 473 hp out of that engine, to cut another half second off that 0-60 mph time, while its suspension makes the most of a twisty road.
The Competition Package is for track days. It adds 30 hp, and comes with lighter-weight seats and a louder exhaust.

As good as the base 2021 BMW X3 is, we’re in love with the M40i, its strong twin-turbo inline-6 engine, and its muscular looks. It’s one of the best vehicles BMW builds, and that’s saying something.