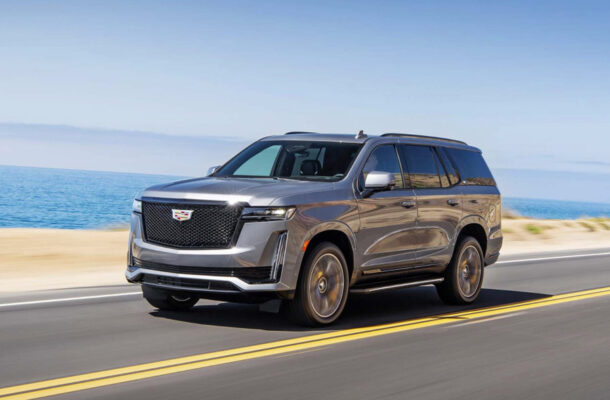 The 2021 Cadillac Escalade is the biggest and most expensive Cadillac you can buy. It’s an SUV that seats up to 8 passengers that you can carry from muddy bogs to Mudhen games, in effortlessly powerful luxury.

The Escalade has been redesigned for 2021. It has grown by nearly eight inches in length and five inches in wheelbase, and now approaches the size of the Chevy Suburban. Fittingly, it’s made in Texas. It features state-of-the art technology, with as many as five screens in the vast cabin. It rides better than ever, with a new independent rear suspension and available air suspension. It adds more standard safety equipment, and there’s a newly available diesel engine.

On the outside, it has a blunt front end, horizontal headlights, and vertical taillights that rise from the rear bumper to the tall roof. On the inside, 38 inches worth of curved screens are stretched across the leather-wrapped dash.

The base engine is a tried-and-true 6.2-liter V-8 making 420 hp. The new engine is a 3.0-liter turbodiesel inline-6 making 277 hp. Both engines are mated to a 10-speed automatic transmission. The Escalade is rear-wheel drive, with available four-wheel drive with low-range gearing and a mechanical or electronic limited-slip rear differential.

It hasn’t been crash-tested yet either, but the Escalade helps out with standard automatic emergency braking with pedestrian detection, front and rear parking sensors, active lane control, a surround-view camera system, and a driver seat that vibrates in the direction of potential danger. Adaptive cruise control, blind-spot monitors, rear automatic braking, and automatic parking system come on upper models and are available on others. Night vision is optional.

The Platinum Luxury and Sport Luxury both start at $104,290 and add semi-aniline leather upholstery, 16-way power front seats with a massage function, a 36-speaker AKG audio system, soft-close doors, and an air suspension with selectable modes.

Options include a head-up display, a refrigerator with freezer mode, night vision, and Cadillac’s Super Cruise driver-assistance system that allows hands-free freeway driving as long as the driver is focused on the road.

The 2021 Cadillac Escalade’s new bodywork doesn’t stray from the bold and blocky look that’s had since its introduction in 1999. In fact, it doubles down on big and bluff, with an even taller face flashing an imposing version of Cadillac’s shield grille, and 22-inch wheels on every model.

The squared sides are complemented by subtle fender flares.The massive rear end is very tall. vertical taillights, large exhaust outlets at the corners, and a central Cadillac crest that doubles as the liftgate release.

Most models flash a lot of chrome, for example around the windows and even the roof rails, while the Sport turns that trim glossy black.

Cadillac’s new infotainment system is state of the art. The auto industry’s first curved screen has twice the resolution of a 4K TV, and deep blacks that don’t require it to be hooded. It acts quickly, can be controlled by touch or with a rotary dial, and offers wireless Apple CarPlay and Android Auto compatibility.

There are three curved screens: a 16.9-inch touchscreen infotainment system, a 14.2-inch digital gauge cluster, and a 7.2-inch touchscreen that provides trip information. It also controls what’s shown on the instrument cluster screen; choices include the gauges, a forward camera view with available augmented reality overlays, a navigation map, and the night vision screen.

Buyers have a choice among nine upholstery and trim colors, four perforation and quilting patterns for the upholstery, and seven rich wood trims. The environment is lush, although there are still some budget-grade plastics in the cabin. We found them trying to hide down below knee level.

The center console holds an electronic gear selector, and a rotary dial that can be used to control the center screen instead of the touch interface.

Front occupants sit on comfortable seats with standard heating and available cooling and massagers. Captain’s chairs are standard for the second row, providing seating for seven in the cabin; but a 3-person bench for the second row is available for the same price, making the Escalade an 8-seater.

The second-row bench provides more leg room, because it’s mounted on sliders. When it’s slid forward, the third row gets the extra leg room—a whopping 10 inches more than before.Two adults can comfortably fit in the wayback, although the low seat bottoms don’t provide much thigh support. If there are three back there, they had better be kids.

Second-row passengers can also get a pair of 12.6-inch entertainment screens. All cabin occupants will enjoy the standard 19-speaker sound system, or optional 36-speaker system, both by AKG.

The increased length of eight inches in the 2021 Escalade allowed wider rear door openings, so entry and exit is easier than before.

The new independent rear suspension brings another bonus. It eliminates wheel wells in the third row, allows the row to be folded flat, and provides a flat cargo floor.
Cargo space behind the third row is 25.5 cubic feet, maxxing out at 109.1 cubic feet with the second and third rows folded. In the ESV with a longer wheelbase, it’s 126.6 cubic feet.

The standard engine is a 6.2-liter V-8 making 420 hp, mated to a 10-speed automatic. The engine is as smooth and willing as it is big, and the transmission’s shifts are barely noticeable. The big Escalade can accelerate from 0-60 mph in about 6.0 seconds.

The new 3.0-liter turbodiesel inline-6 makes 277 hp, mated to the same 10-speed. It should accelerate to 60 mph in the mid-seven-second range. Both versions are rated to tow up to 8,200 pounds, although the diesel should do it easier, because it has more torque.

The ride and handling of the 2021 Escalade are considerably improved over the previous generation. The ride is cosseting, as the new independent rear suspension isolates each side of the vehicle, so a bump on the left won’t be felt on the right.

The suspension can be further improved with the optional adaptive magnetic dampers, as well as the air suspension that can raise or lower the Escalade by four inches. It lowers the beast for better aerodynamics on the freeway or better balance for corners. The electric-assist steering is stable and nicely weighted, having lost the play in the steering wheel that plagued the previous Escalade. But don’t forget, it’s still a beast to park.

The 2021 Cadillac Escalade has made the leap into the new century with a raft of luxury and technology upgrades. It’s longer, more capable, and more advanced—and it’s lined with all kinds of look-ahead features to help it reclaim its place in the top rank of luxury SUVs.