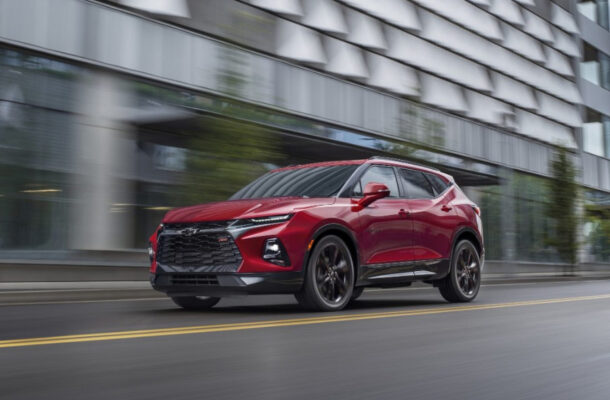 The 2021 Chevy Blazer is a mid-size crossover SUV, a family wagon that revives a legendary name but not the legendary off-road capabilities of the old Blazer.

The new Blazer, which came back in 2019, is front-wheel drive with available all-wheel drive, and a choice of three engines.

For 2021, automatic emergency braking comes standard on the 2LT Blazer and higher trims, but it’s still not standard on base L and LT models.

Chevy tunes the Blazer for a sportier ride and sharper steering than many of its other crossovers. There are two all-wheel-drive systems, the more sophisticated of which can shift the power between the rear wheels, not just from the front to the rear.

The cabin is spacious even though the exterior dimensions aren’t much greater than the Chevy Equinox. There’s a sliding second-row seat providing good leg room or cargo space, but there’s no available third row as on the like-sized GMC Acadia.

The NHTSA gives the Blazer five stars overall in safety, while the IIHS hasn’t fully tested it yet. Automatic emergency braking is not standard, but comes on the top two of four models. Available safety equipment includes a rear camera mirror and adaptive cruise control.

Nor is it optional on the Blazer LT, which costs about $34,000 and adds satellite radio and a power driver seat.

The Blazer 2LT, which also costs about $34,000, gets the turbo-4 engine and automatic emergency braking, active lane control, and automatic high-beam headlights. The V-6 engine is optional.

The Blazer RS and Blazer Premier both cost more than $42,000. The RS has a stiffer suspension and quicker steering, plus navigation, a heated steering wheel, remote start, a power tailgate, and 20-inch wheels. Options include heated rear seats, cooled front seats, a rear camera mirror, a sunroof, and 21-inch wheels.

The swoopy Blazer has a rising beltline with a roof that seems to float thanks to its black pillars, and it wears this popular style well. It’s a common SUV profile, nothing edgy. The Blazer adds chunky fenders, a big grille with LED headlights, and small taillights like those on a Camaro.

The Blazer’s upholstered wing-like dash is interesting and looks good, but the layout of the instrument panel compromises some functions. The clean 8.0-inch touchscreen is flanked by banks of buttons, and secondary controls sit where they can. The USB ports are above the smartphone bin where they should be, but the slim strip of climate controls that runs across the center stack is too small. Big round vents use their trim rings to change temperatures; but they’re poorly located and blow air into the driver’s eyes.

GM’s latest infotainment interface is fast and friendly, but smartphone management is simpler than the $10-a-month cloud-based navigation system.

There’s good space in the cabin, but the front seats could use better cushions. The base Blazer L comes with cloth seats and manual adjustment, while the LT gets leather and 8-way power. The RS and Premier get ritzy perforated leather, the padding is firm and the seat bottoms are short.

The rear seats could also use better padding, while being heated on some versions. Head room is good in the rear, as is leg room which gets better when the rear seat is slid back on its track.

When it’s slid forward, there’s very good cargo space—30.5 cubic feet. When the seat is folded, that space expands to 64.2 cubic feet. That’s not much more than the slightly smaller compact crossover Equinox, but that says more about the excellent packaging of the Equinox than it does about any shortcoming in the Blazer. The Blazer has better fit and finish than the Equinox, and is quieter in some models thanks to active noise cancellation.

Exterior visibility could be better however, because of the relatively short side windows and thick roof pillars.

We’ll pass on the base engine, a 193-hp 2.5-liter inline-4. That’s not enough power to motivate a two-ton SUV, although the well-sorted 9-speed automatic transmission does its clever best to carry the engine.

The 230-hp 2.0-liter turbo-4 eliminates two of those three issues. It’s quicker, quieter, and brings 1 more mpg with its 37 more horsepower—plus it’s available with all-wheel drive. It uses the same good 9-speed, although mated to this engine, the transmission skips around somewhat, in search of the best gear. But not from a standstill, where the linear pull is strong, thanks to the turbo’s torque.

The steering in every Blazer is fairly crisp. The ride is firm and assertive, although the independent suspension fidgets a bit over rough pavement. In a twist to most SUVs, the Blazer rides better on its bigger wheels; the 20- or 21-inch wheels are smoother than the 18s.

The RS has stiffer dampers and front struts, and standard 20-inch wheels with 21-inchers optional. Even with that, it too rides better than the Blazer with 18-inch wheels.

The RS also has distinct drive modes. Sport mode in all-wheel drive moves power between the rear wheels to improve the handling. Sport mode also holds the lower transmission gears longer, adds weight to the steering (which already has a quicker ratio), and cuts corners in a very nice way.

There are two available all-wheel-drive systems. The inline-4 and turbo-4 use a simple system that brings in the rear wheels when the front wheels lose traction, up to 50/50 front/rear. V-6 Blazers use a more sophisticated twin-clutch rear differential which can move torque across the rear axle, to improve traction and handling.

The 2021 Chevy Blazer offers distinctive styling and a sporty RS model for SUV drivers in search of something less conventional. The mid-range powertrain and trims offer the best value, but the Blazer Premier and RS have the safety technology we need and the responsiveness we want.