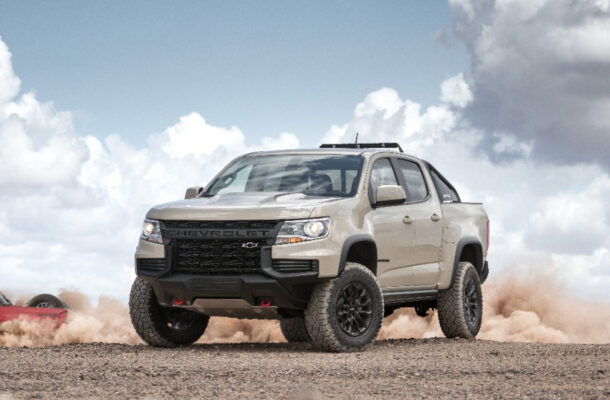 The 2021 Chevrolet Colorado is a capable, comfortable mid-size truck that comes with a choice of powertrains, bed lengths, and body styles—not to mention more adventurous special editions.

The 2021 model benefits from a few upgrades, including revised front and rear ends and an almost-universally standard 8.0-inch touchscreen. A new Custom Special Edition is also on the ordering books.

Like any good truck, the Colorado comes in a variety of configurations. In this case, buyers can pick between an extended cab, which features a pair of jump seats stuffed behind the driver’s seat, or a crew cab with a conventional second row. Those cabs bolt up to either a 5-foot or 6-foot-2 bed; the extended cab offers only the larger box, while the crew cab is offered with both.

In the right combination of bed, cab, and engine, the Colorado will haul up to 1,550 pounds in the bed and tow up to 7,000 pounds. Those figures put it towards the top of its class.

The Colorado earned four stars out of five with the NHTSA, and the IIHS called it marginal in at least one of their tests.

The W/T, or Work Truck, continues to be at the bottom of the pecking order. This base truck is spartan but still includes a 7.0-inch touchscreen with Apple CarPlay and Android Auto, a four-way power driver’s seat, 17-inch steel wheels, and manual climate control with air conditioning. It begins at $26,395 and is limited to the extended cab.

The LT comes up next, at $28,895 for an inline-4 model with the extended cab. Compared to the W/T, it adds a six-way driver’s seat, an 8.0-inch touchscreen, keyless entry, and aluminum wheels. This is where we’d start our shopping.

The $36,395 Z71 requires four-wheel drive and is the milder of the two off-road oriented trims. It gets a unique suspension, a locking differential, and all-terrain tires. It also includes a heated steering wheel, automatic climate control, and wireless device charging.

The ZR2 starts at $42,795 and builds off the Z71 by adding additional ground clearance, Multimatic spool-valve dampers, a transfer case shield, and a unique front end. The interior is treated to full leather and power front seats. The available Bison package costs $5,750 and takes everything to the next level with a full complement of skid plates and functional aesthetic upgrades by off-road outfitter AEV.

The Colorado isn’t the most exciting-looking truck in its base form, but moving up the trim ladder begins the journey from responsible truck to fantasy pickup. The basic design first shows signs of promise in the Z71; that quickly matures into the wildly distinctive ZR2, with its big all-terrain tires and extra clearance.

The humbler trims don’t have that kind of attitude. The W/T and LT are plain, but in a modest, appealing way—they don’t put on airs or try to promote some glamorized lifestyle through artificial styling cues. They are honest trucks, and we can’t imagine anyone being turned off by their pleasant design.

In the full-size segment, pickup interiors are being held to higher and higher standards—but that isn’t the case with smaller trucks, where cabins are economical than extravagant. The Colorado has a spartan air and a sense of durability. You don’t feel bad climbing into the cab with muddy boots and dirty gloves.

With the 8.0-inch touchscreen now gracing every truck save the W/T, the Colorado does not fall short on connectivity. The system works well enough for our liking, and we appreciate the standard Apple CarPlay and Android Auto on every trim including W/T and wireless device charging.

The standard tough-wearing cloth upholstery is far from fancy, but that’s in keeping with the rest of the Colorado. The optional leather upholstery—standard on the ZR2—dresses things up but we’d stick with the cloth.

The back seat is more useful for gear than for people. In extended cab form, the rear fold-down jump seats are the equivalent of stadium bleachers in terms of room and comfort. The crew cab has a traditional back bench, but the cushions are firm and there’s only 35 inches of leg room to work with.

Cargo space is no concern, as the two bed sizes hold ample quantities of anything you can imagine. In the right spec the Colorado will tote up to 1,550 pounds in its bed.

The Chevy Colorado has multiple personalities when it comes to roadability, but common among all its variations are a jouncy unladen ride. It’s a utility vehicle, and cornering is low on the priority list. That’s especially true with the Z71 and ZR2, which have knobby tires and lifted suspensions that sacrifice some on-road comfort.

However, those models also elevate the personality of the Colorado. The ZR2 is particularly adept at stirring emotion. Get out on a trail and the serious reengineering Chevy has done on the ZR2 is immediately apparent. Riding on a short wheelbase and featuring generous suspension travel and trick spool-valve dampers, this truck will conquer the sort of terrain most buyers will never encounter.

Most buyers will stick with the road-friendly suspension and pair it to the 3.6-liter V-6. This gutsy six has been powering various GM vehicles for years, and it is just as enjoyable and potent in this application as anywhere else. We find it strikes a nice balance of power, capability, efficiency, and refinement.

The 181-hp 2.5-liter inline-4, by contrast, feels winded whenever the bed starts getting full or the grades get steep. The turbodiesel inline-4 lopes along on its effortless torque—369 lb-ft of it—but a pricey upcharge dims its appeal. It can’t match the V-6 for smoothness, either.

The 2021 Chevy Colorado is capable, usable, and durable. And off-road junkies will love its prowess on the trail, where the ZR2 is almost unstoppable. If you can’t swing that trim, try the Z72 on for size.