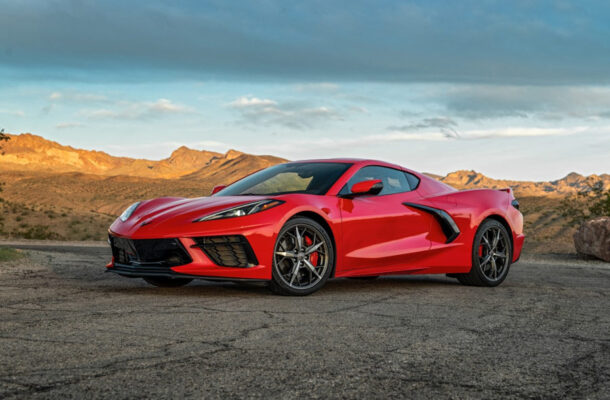 The 2021 Chevrolet Corvette C8 is a mid-engine sports car, a coupe or hard-top convertible supercar with a big V-8 engine, a 0-60 mph time of 2.9 seconds, and a starting price under $60,000. The LT2 6.2-liter V-8 makes 495 horsepower and 470 pound-feet of torque, and is mated to a perfect 8-speed dual-clutch transmission. There is no argument: the Corvette C8 is the highest-performing car you can buy for the dollar. Its cornering and braking, not to mention its looks, are as awesome as the acceleration.

After nearly 70 years as a front-engined car, the C8 made its debut in 2020, so for 2021 the changes are minimal. New standard equipment includes a seatbelt safety device that makes it impossible to shift the car out of park if the driver is unbuckled, as well as wireless Apple CarPlay and Android Auto. There’s also a digital track tachometer display.

The gorgeous contemporary mid-engine design is five inches longer than the 2019 C7 Corvette, but it doesn’t look bigger because the hood is not nearly as long. It’s also two inches wider, and has a muscular tail, with many creases, flares, and gaping air intakes on the sides, all styling features that distract from the illusion of size.

Cylinder deactivation, which shuts down four cylinders when they’re not needed for momentum, helps the Corvette reach an impressive 27 mpg highway mileage. The EPA rates both the coupe and convertible at 15 mpg city, 27 highway, 19 combined.

The 2021 Corvette hasn’t been crash tested. Automatic emergency braking is not available. A rearview camera that displays in the mirror, blind-spot monitors, and rear cross-traffic alerts is optional.

The 2LT, at about $74,000, adds 14-speaker Bose sound, an excellent head-up display, and heated and cooled seats with power lumbar adjustments.

Options for all models include Magnetic Ride Control ($1,895), the Performance Data Recorder for track days, a system that raises the nose to protect against hitting sidewalk curbs ($1,995), premium colors such as Sebring Orange ($1,500), carbon fiber trim, and GT3 seats with monster bolstering.

The C8 could pass for a European supercar like a Ferrari, and probably does, out on the highway. However its muscular rear end with dual twin exhaust pipes and dual twin taillights are as Corvette as it gets. And the checkered-flag emblem on the hood makes it unmistakable.

The lower grille bulges with air intakes that pass down the body to the doors, where side intakes pass air through the engine to the rear. The tail flattens into a rear spoiler that might be the only part of the design that doesn’t appear to be cut from the same metal.

The roof panels can be removed to store in the tiny rear trunk, while the hard-top convertible features flying buttresses that remain standing when the top panel is stowed.

The cockpit cants its touchscreen toward the driver, and a wall of single-file climate buttons rises from the console to the dash, separating the driver from his or her passenger. Both enjoy leather upholstery with contrast stitching, and carbon-fiber and aluminum trim. The snug seats are comfortable, and power-adjusted. We would avoid the optional GT3 seats with bolstering that’s overkill.

The forward cabin presents a close-up view of the road over the short hood. Out the side, however, the vision is poor; and the small rear window suffers from glare reflecting from the clear engine cover.

The front and rear trunks—in both the coupe and convertible—combine for a total of 12.6 cubic feet of cargo space, which is nearly as much as a subcompact car. The front trunk can fit two carry-on bags, while the rear trunk can actually fit two sets of golf clubs, if you squish them with all your might. The removable T-tops fit perfectly into the trunk with no room to spare.

The hard-top convertible collapses in 16 seconds with a power button, and can be done in a sudden thundershower at 30 mph. A power rear window between the two headrests reduces wind buffeting.

The acceleration is breathtaking. Most people will never blast from a stop to 60 mph in 2.9 seconds, but if that’s on your bucket list to do every day, the C8 makes it as cheap as it gets. The C8 is so fast, so smooth, so exhilarating, you’ll find yourself going 100 miles per hour before you know it.

The 8-speed dual-clutch automatic is so good that a manual gearbox is not only never missed, it would feel and be archaic in the C8. First gear in the twin-clutch is low enough to enable a monster launch, and the other seven close-ratio gears click with buttery smoothness and flat engine revs. Paddle shifters afford the driver control of the timing of the shifts, but you’d have to be a pro on the track to improve on the electronic programming that automatically changes gears.

When you need to slow down, the braking is unflappable. Behind the 19-inch front wheels, there are 12.6-inch rotors pinched by 4-piston Brembo calipers; and behind the 20-inch rear wheels the rotors are 13.6 inches, also with 4-piston Brembos.

The Corvette’s assured handling instills confidence in the driver. It doesn’t need all-wheel drive for balance, as the mid-mounted engine provides a 40/60 weight distribution, to go with the very low center of gravity for grippy and stable cornering, even in the wet. It is possible with too much throttle in a corner to wag the tail when stability control is dialed off, but the balance makes it easy to correct.

The double-wishbone suspension uses coil-over dampers on all four corners. Magnetic shocks are a stand-alone option, and they constantly adjust damper stiffness to firm up the ride during performance driving, and soften it while cruising.

The Z51 Performance Package doesn’t increase the power of the 6.2-liter V-8 by very much. It raises it from 490 hp and 465 lb-ft of torque, to 495 hp and 470 lb-ft. It works more on handling and braking. The Z51 adds Michelin Pilot Sport 4S summer tires, instead of the standard Pilot Sport ALS tires, and increases the size of the brake rotors to 13.3 inches front and 13.8 inches rear. The Z51 package also has an electronic limited-slip differential for even quicker traction adjustments coming out of turns.

The 2021 Chevrolet Corvette offers more performance per dollar than any car on the road. Its looks are as breathtaking as its acceleration. It corners and stops like a racecar, and its cabin feels luxurious without sacrificing function. It’s an awesome start in a new direction.