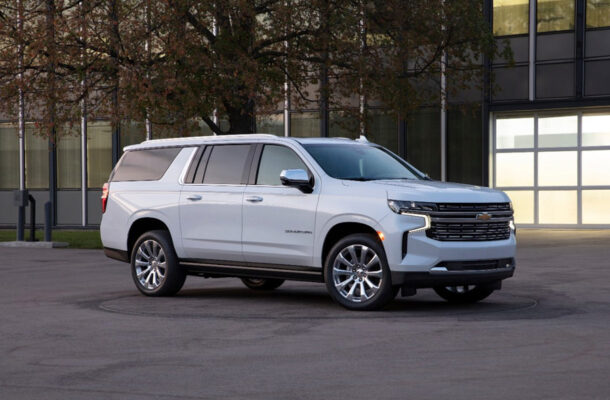 Big SUVs don’t get much bigger than the 2021 Chevrolet Suburban. This swaggering Chevy isn’t just physically intimidating, either—it is also the most venerable nameplate in all of autodom, having been sold continuously in one form or another since 1935. The ensuing decades have endeared the Suburban to buyers looking for ample size in a familiar, predictable package.

The 2021 model is noteworthy for being new. Other than carryover gas engines—which were excellent already—everything else was scrutinized and updated. The rethink has brought a new independent rear suspension, significant injections of technology, and styling that apes the latest Silverado.

A new turbodiesel engine is also available, marking the first time since the 1990s that you can buy a Suburban with an oil-burning powertrain. Displacing 3.0 liters and putting out 260 horsepower and 460 lb-ft of torque, this diesel can tow 8,000 pounds and return up to 20 mpg city, 26 highway, 22 combined.

The 6.2-liter V-8 making 420 horsepower and 460 lb-ft of torque is reserved for the top-shelf High Country trim. The extra power makes it feel quicker, but doesn’t tow quite as much as the smaller V-8: only 8,200 pounds can be hitched up to the bumper.

In a nice surprise, the 6.2-liter doesn’t carry much of a fuel economy penalty over the 5.3; the EPA says the big engine is good for 15/20/17 mpg. Credit for this likely goes to the 10-speed automatic transmission that’s standard on all three available engines.

The redesign brings standard automatic emergency braking and parking sensors, and some upper trims add blind-spot monitors and rear cross-traffic alert. Adaptive cruise control is available, but isn’t even made standard on the High Country trim.

Crash test results have been mixed. The NHTSA awarded it four stars out of five for overall crashworthiness, but rollover performance was rated at three out of five—one star less than what’s typically par for this segment. The IIHS hasn’t yet conducted its testing.

Fleet buyers will start their shopping with the base LS, which starts at $52,995. It’s basic, but still comes standard with a 10.2-inch touchscreen and wireless Android Auto and Apple CarPlay. Also standard are power front seats, cloth upholstery, tri-zone automatic climate control, and 18-inch wheels. A front bench seat is optional on this trim only; equipping it brings total seating capacity to nine.

The $57,795 LT is a better starting point for retail shoppers, as it adds a hands-free liftgate, heated front seats, a Bose 9-speaker audio system, an auto-dimming rearview mirror, and wireless device charging.

The $61,095 RST comes next. It aims to be the style leader of the lineup with 22-inch wheels and exclusive trim, but otherwise doesn’t add much over the LT.

A more comprehensive themed trim is the Z71, which begins at $63,195. Besides its mandatory four-wheel drive, the Z71 gets hill-descent control, skid plates, tow hooks, a transfer case, and its own bespoke front end that improves the approach angle.

The $73,595 High Country moves into Escalade territory, but is equipped with luxuries like the 6.2-liter V-8, a head-up display, and a surround-view camera system.

The Suburban has been restyled, but a quick glance won’t suffice to pick up on what’s new. The shape and profile are classic ‘Burb: an impossibly large, squared-off two-box shape bookended by bluff fascias. That recipe hasn’t changed since the Nixon days, but like all enduring family traditions, there can sometimes be merit in keeping things the same. In the Suburban’s case, the familiar profile lends it its unparalleled ability to haul and shuttle anything that fits.

The new front end is the biggest departure from the old model. A wide, rectangular grille is larger and bolder than that of its predecessor; the slim headlights at the top corners of the grille threaten to stretch around to the front fenders, which themselves intrude slightly into the grille.

The Suburban’s interior is clearly a notch or two above its pickup cousin. Build quality, material quality, and the overall design is much more in line with the Surburban’s prices and perception.

The modernized cabin has also abandoned the column shifter, leaving drivers to select their gears via a pushbutton design. It takes more focus than the familiar, intuitive column shift, but the buttons are well placed and in easy reach. There won’t be any accidental shifts into reverse when all you wanted to do was select a radio preset.

Chevy retained physical controls for the radio, which can be found between the low-set climate controls and the touchscreen in the center stack. The buttons are bit plasticky, which sticks out more in the High Country models than in the lower trims.

Befitting the size of the Suburban, a 10.2-inch touchscreen is standard on all trims. It gets smartphone compatibility and can be further equipped with navigation. The screen is placed an ideal distance from the driver, negating any need to overstretch your right arm in an effort to tap or swipe. Its menu structure is a bit complicated, however, with some features buried two or three menus deep.

Seating is a high point in the Suburban. Get the bench seat on the base model and you can seat nine people in comfort—the only vehicle aside from full-size commercial vans to offer more than eight seats. The standard front buckets are the preferred arrangement, though. They are wide, soft, supportive, and afford a commanding outward view.

Both back rows are abundantly roomy. Even the three-person third row, a place off-limit to most adults in other SUVs, can easily swallow two adults with leg and knee room to spare.

The Suburban has room for 41 cubic feet of cargo behind its third row; drop the back two rows and that figure swells to an astounding 145 cubic feet. If you think that’s a massive cargo area, you’d be right—it rivals or exceeds that of most minivans.

There is no bad-driving Suburban. That shouldn’t be a surprise: GM has had over 80 years to perfect the formula for its perennial people-mover. More to the point, the powertrains used today have been around in one form or another for well over 10 years. The polish the two gas engines exhibit remains one of the Suburban’s major selling points.

The 5.3-liter V-8 will be the most common engine by far, and that’s not a bad thing—there really isn’t a need to upgrade. The 5.3 does it all: it gets decent gas mileage, has satisfying thrust even when loaded up, and is the strongest hauler of every engine here.

The 6.2-liter V-8 would fade to black in the shadow of the smaller V-8 if it wasn’t equally as good in its own right. While it does sacrifice some towing ability and city fuel economy, it otherwise is as good as the 5.3 but with the added bonus of more power and faster straight-line performance. However, the steep cost of entry—Chevy limits this engine to the $73,595 High Country trim—makes it a dubious proposition. Better to stick with a lower-trim Suburban and “settle” for the excellent 5.3.

We’re not soothsayers, but we imagine the optional turbodiesel will be a rare bird; outside heavy-duty pickups, diesels struggle to find much love among buyers. But don’t let public opinion sway you. This diesel is smooth, quiet, and significantly more efficient than its gasoline counterparts. Its ability to return 26 mpg on the highway while loafing along with the same unperturbed grace of a V-8 is a miracle of modern engineering and a big reason this oil-burner should be the go-to engine for road trippers. That it costs just $995 over the 5.3-liter V-8 makes it even more enticing.

The new four-wheel independent suspension imbues a velvety ride that gives the Suburban a newfound air of sophistication.The jitters endemic to the outgoing model have been banished. On the Premier, magnetic shocks step up the ride quality even further; the High Country does one better with an air suspension. It rides the creamiest but isn’t overly soft.

The new 2021 Suburban blurs the line even further between it and its upmarket stablemates, the GMC Yukon and Cadillac Escalade. Who needs a fancy Escalade when the Suburban is 80 percent of the truck at 60 percent of the price? From a certain perspective, it’s a strong value, especially if you check a few choice boxes when configuring yours. The place to start shopping is the LT trim, though anyone with a bit more to spend will want to consider the Premier.