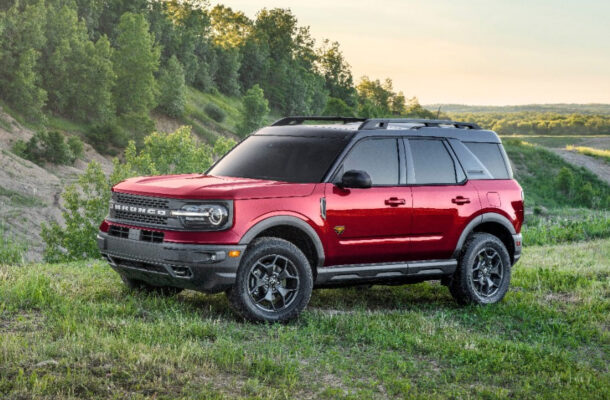 The 2021 Ford Bronco Sport is a new small crossover SUV that bridges the versatility gap between the around-town Ford Escape and the off-road Ford Bronco. It’s based on the Escape platform, but it’s 8.6 inches shorter and 4.0 inches taller.

Made in Mexico, the Bronco Sport’s styling brings back the old Bronco’s square ends, tall roof, and heavily cladded bumpers. The interior has similar throwback appeal, but with up-to-date technology including a touchscreen interface.

Buyers have their choice of two engines, a small but potent 1.5-liter turbo-3, or a 2.0-liter turbo-4, each mated to an 8-speed automatic transmission. Both are all-wheel drive, but they use different systems. The system with the standard engine splits power front and rear to adjust for traction needs, and comes with five selectable drive modes.

The more advanced system paired with the 2.0-liter turbo-4 in the Badlands and First Edition models uses a twin-clutch rear differential that can send all of the rear-wheel torque to either wheel. It comes with two additional terrain modes.

The independent front and rear suspension, tuned to handle off-road, brings a highway ride that’s a bit rougher and louder than the Escape, but the top models of Bronco Sport use softer springs to smooth out the bumps.

Total cargo volume of 65 cubic feet behind the front seats matches the Escape, but the rear seats are not as wide and roomy.

For an all-wheel-drive vehicle with solid off-road capability, the 2021 Bronco Sport is very good on gas. The turbo-3 gets an EPA-rated 25 mpg city, 28 highway, 26 combined. The 2.0-liter turbo-4 in the top two models—called Badlands and First Edition—gets 21/26/23 mpg.

The NHTSA and the IIHS have yet to crash test the Bronco Sport, which comes standard with automatic emergency braking, active lane control, blind-spot monitors, and automatic high beams. Optional safety features include adaptive cruise control with stop and go, traffic-sign recognition, and parking sensors.

The base model starts at $28,155 including destination, and comes with an 8.0-inch touchscreen with Apple CarPlay and Android Auto compatibility, four USB ports, roof rails, and LED floodlights on the liftgate interior that illuminate a broad half-circle behind the car when opened.

The Big Bend for $29,655 adds rubberized cargo floor mats and seat backs, keyless start, Molle straps on zippered pockets, and many options. It also has a keypad on the door so you can leave the keys in the car to go swimming, surfing or kayaking.

The Outer Banks climbs to $33,655 and adds heated seats and steering wheel, power front seats trimmed in leather, as well as a black roof and 18-inch black wheels.

The $34,155 Badlands brings the 2.0-liter turbo-4, along with the off-road features. It gets front tow hooks, 17-inch aluminum wheels wrapped in 28.5-inch all-terrain tires, and a front camera with a built-in washer.

The $39,655 First Edition was introduced with a limited run of 2,000 units, and sold out early. It has all the off-road gear of the Badlands and most of the creature comforts of the Outer Banks, including a 6.5-inch digital cluster that shows a mountain lake under the Milky Way before start up.

Options include a five-part cargo management system that slides on a track and can be used as a table, washable rubberized flooring, and a 10-speaker Bang & Olufsen sound system.

LED headlights flank the Bronco name written in block letters across a block grille. A lower grille boxed in heavy cladding carries around to the round wheel arches, rocker panels, and rear bumper. The hood flexes twin bulges the size of a 2×6 and features peaked corners that aid vision from inside the cabin.

The square roof with standard rails sets it apart from other small crossovers, especially the black roof on the Outer Banks. At the rear, a split tailgate with flip-up glass comes from the first generation Ford Escape.

In the cabin, with cloth seats, plastic body panels, and easy-to-clean rubbery plastic on the dash and in the cargo area, the Bronco Sport doesn’t conceal its utilitarian nature. That’s the base and Big Bend models; on higher trims, there’s two-tone leather upholstery.

Vertical, truck-like vents flank the touchscreen and a band of controls under a shelf that’s ideal for placing things like a phone. A wireless charging pad with USB ports bridges the center stack and narrow console that houses an electronic gear selector and a small dial for the driving modes that control terrain management.

Seat comfort in the front is nothing to write home about, with bottom cushions that are a bit short. At least the tall roof provides plenty of head room. In the rear, there’s 36.9 inches of leg room, which is 4.0 inches less than the passenger-minded Escape, thanks to the Sport’s shorter length. There are three seats in the rear, but the best use of the middle space is the fold-down armrest.

The Sport is more cargo-minded, not so much in size as in detail, with tie-downs, carabiner hooks, and zippered rear pockets. The cargo floor can be lowered a couple inches to fit taller items. There are more than 100 optional accessories for the Bronco Sport.

There’s 32.5 cubic feet of cargo space behind the rear seats, and exactly twice that when the 60/40 rear seats are folded.

The boxy greenhouse creates good sightlines front, side, and rear. That’s rare for a small crossover.

The small but potent 1.5-liter turbo-3, same as used in the Escape, makes 181 hp and 190 pound-feet of torque. It balances acceleration and efficiency, and can pull off two-lane passing or spring off the line. We wouldn’t call it quick, but it’s by no means a sled.

The 2.0-liter turbo-4 in the Badlands and First Edition makes 245 hp and 275 lb-ft of torque, enough to spin the 28.5-inch all-terrain tires on pavement. This engine adds two more drive modes that adapt throttle and traction settings to the conditions.

Both engines use an 8-speed automatic transmission. When the throttle is applied normally, the transmission is predictable and well-behaved, certainly more responsive than a CVT; but under heavy throttle, the lower gears experience dramatic shifts as if announcing the upcoming shift, instead of just shifting.

The all-wheel-drive system with the 1.5-liter turbo-3 splits power front and rear to adjust for traction needs, and comes with five selectable drive modes: Normal, Eco, Sport, Slippery, and Sand. Sand mode allows for hill climbing and deep rut traversing, as well as playing at higher speeds in the sandbox of an old rock quarry like we did, or other places we wouldn’t dare take the Ford Escape.

The more advanced system uses a twin-clutch rear differential that can send all of the rear-wheel torque to either wheel. It comes with two additional terrain modes, Mud/Ruts for climbing and traversing muck, and Rock Crawl.

With nearly eight inches of ground clearance, the Bronco Sport ford up to 17.7 inches of water. Its 21.7-degree approach angle and 30.4-degree departure angle isn’t quite as much as the Jeep Trailhawk, but it beats the Subaru Crosstrek. A front 180-degree camera comes on automatically in the Mud/Ruts and Rock Crawl modes, and shuts off automatically above 13 mph.

On the Badlands and First Edition, there’s hill descent control, which takes over the throttle and brake; it can be set up to 20 mph, and totally takes the stress and danger out of driving down an icy hill.

MacPherson struts up front and an independent multi-link rear suspension make for a pliant ride, especially with the Badlands and First Edition, which use monotube rear shocks, softer springs, and an isolated front and rear suspension.

With the Bronco Sport, Ford hits at least a triple in its first time at the plate in this particular game. The base model has a worthy powertrain and is well-equipped, but the next model up, the Big Bend, is only $1,500 more—and it’s the one we’d buy.