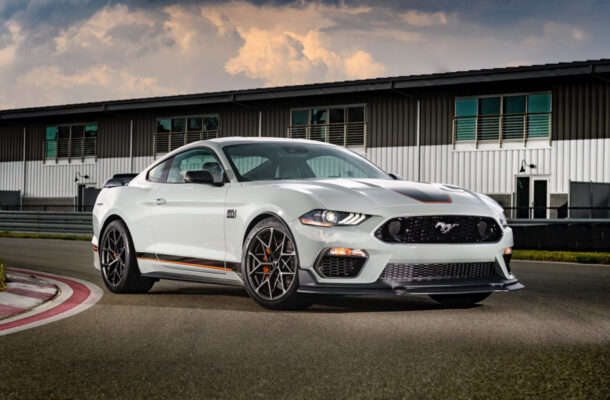 Is there anything quite like the iconic Ford Mustang? It’s been a sensation since it debuted in April 1964. Almost 57 years on, the Mustang is bigger, more powerful, and more expensive than ever—but remains an enduring symbol of driving’s most romantic attributes.

For 2021, there’s been a bit of a shuffle among the performance variants. Gone are the GT350 and Bullitt models; in their stead is the new Mach 1. Don’t confuse this with the Mustang Mach E, Ford’s first all-electric crossover (which we cover separately). The Mach 1 is purely old-school, with a big V-8 making 480 horsepower and styling cues suggesting the namesake 1969 original.

The new driver-assist equipment doesn’t affect the Mustang’s crash-test results, which include a five-star rating from the NHTSA and a nearly perfect score from the IIHS. We say nearly perfect because the one blemish was an “Acceptable” rating for front-impact performance.

Under the hood, the base Mustang features a 2.3-liter turbo-4 making 310 horsepower, but all other models feature some sort of V-8. Of those, most will get a 5.0-liter V-8 making 460 horsepower; the Mach 1 ups output to 480 horsepower. The Shelby GT500 uses an exclusive 5.2-liter supercharged V-8 making a prodigious 760 horsepower.

A 10-speed automatic will be the most common gearbox, but a 6-speed manual is on the order books as well. The GT500 gets its own 7-speed dual-clutch automatic.

The thriftiest Mustang is the turbo-4, which returns 21 mpg city, 32 highway, 25 combined with the 10-speed automatic. Convertibles are rated for 20/28/23 mpg with the automatic. Opting for the manual transmission means ratings as low as 19/25/21 mpg.

As with prior years, the cheapest Mustang is the turbo-4 powered EcoBoost. For $28,350, it gets standard equipment such as cloth upholstery, 17-inch wheels, a drag-strip-ready line lock feature, and an outmoded 4.2-inch infotainment display screen.

The $36,120 GT is the base V-8 Mustang, which is equipped similarly to the EcoBoost. Aside from rear parking sensors and a power driver’s seat, all other features unique to the GT are performance upgrades.

The $41,315 GT Premium is akin to the EcoBoost Premium, but gains heated mirrors and leather upholstery.

The new Mach 1 retails for $51,320. It gets a host of unique performance bits, including a functional front splitter, a rear-axle cooling system, a beefed-up oil cooler, and some other bits and bobs. The interior gets heated and cooled front seats upholstered in cloth.

Embedded into the sheetmetal of the Mustang is a half-century of heritage. The taillights—which blink out a sequential pattern—are a pair of narrow three-slot fixtures harking back to the 1960s; the fast-sloping roofline also recalls the original. Meaty hips and sinewed bodysides give a modern athletic impression. The front fascia cants forward menacingly. You can see the influence from early models but the overall look is decidedly modern in its execution.

The new Mach 1 is the most overt time machine of the lineup, with its special striping and five-spoke wheels doing their best impression of 1969. It even sports fake fog light housings in the grille to really drive home the retro vibes.

Nostalgia is cast aside for the GT500. This is a Mustang that has gone through supercar boot camp. The grille, so piquantly sized on lesser models, now engulfs most of the front end. The hood scoop bulges inordinately, all swollen with supercharged madness. The hips are wide as a dually truck. Out back, massive quad exhaust pipes and a spoiler announce this isn’t any run-of-the-mill Avis Mustang.

Six years into this generation and the Mustang interior is holding up well. The toggle switches and abundant metallic trim keep eyes distracted from some of the low-rent plastics scattered throughout. The cockpit is laid out with a nod to driver involvement. The gauge cluster binnacle is the old-school binocular type, but a digital screen can replace the standard analog gauges.

The design does a nice job of mixing retro cues with a modern flair. Though some cheaper materials are employed, let’s remember this is a Mustang, not a Porsche. Besides, the pricey GT500 gets enough soft-touch surfaces and quality trim bits that the cabin almost feels worth the $74,000 asking price.

The base infotainment system has an outdated 4.2-inch display, but most models will be equipped with a much more appropriate 8.0-inch touchscreen that gets smartphone compatibility. It runs Ford’s Sync infotainment software, which has matured into a robust, intuitive system.

Though the Mustang is technically a four-seater, the back seat is best left empty—leg room is nearly nonexistent, and anyone past puberty will graze their head on the sloping rear window. The front seats are comfortable and supportive, with just the right amount of bolstering for sporty driving. For thin-waisted track rats, Recaros are available as well.

The trunk is good for 13.5 cubic feet in coupes, 11.5 cubes in convertibles. The rear seats fold down to enlarge this space.

With three engine options spanning a gulf of 450 or so horsepower, the Mustang leaves no stone unturned and no potential customer unsatisfied. The turbo-4 automatic convertible is perfect for cruising the coast on vacation; the GT500 is an ideal partner for racking up road-course trophies. The base GTs sit in the middle, with lots of power and smart moves for an attractive price.

Let’s consider the turbo-4 first. With 310 horsepower and 350 lb-ft of torque from 2.3 liters, this engine is nothing to sneeze at; these figures would have been a match for a V-8 Mustang of 15 years ago. The flat torque curve delivers all that torque before 2,000 rpm; though it lacks the theater of the V-8, the thrill of power is still there, just in a more muted fashion.

You can also opt for a $5,000 high-performance package that adds 19-inch wheels wrapped in summer tires, an active exhaust, heavy-duty brakes and front springs, and an extra 20 horsepower. Enticing, but our money is on the more affordable $1,995 handling package that brings a Torsen limited-slip differential, upgraded brakes and tires, and adaptive dampers. Yet even without these options the turbo-4 Mustang nicely balances confident handling and a commuter-friendly ride.

The V-8 GTs are something special, though. We’ve become numb to big horsepower numbers these days thanks to the miracles of modern engineering, but the Mustang’s 460 horsepower—or 480 in the Mach 1—is a marvel. Any straightaway becomes a tempting stand-in for a drag strip. Just the noises alone will have you goosing the throttle gleefully.

These V-8s aren’t allergic to handling, either. Performance packages are offered that beef up the chassis, but even out of the gate the GT is decent, though not as fun in technical corners as the lighter, more tossable turbo-4.

The Mach 1 promises the best handling this side of the GT500 thanks to its wealth of repurposed GT350 suspension components. It also gets the GT350’s unique 6-speed manual, though the 10-speed automatic is offered as well.

The GT500 is the ultimate choice. It evaporates the quarter mile in under 11 seconds and can do 0-60 mph in as little as 3.3 seconds. The chassis is ready to challenge supercars costing twice as much. It is as well-rounded and viciously fast as any prior Shelby—and yes, that includes the Cobra.

The 2021 Ford Mustang is fast, fierce, and (mostly) affordable. It retains all the qualities that have made its predecessors so iconic: V-8 power, great styling, and accessible performance. You don’t need the GT500 to have a good time; the base EcoBoost will do just fine. In fact, we’d be plenty happy with an EcoBoost Premium if we didn’t have the budget for a GT Premium. Whichever you choose, you’re buying a fast, capable icon.