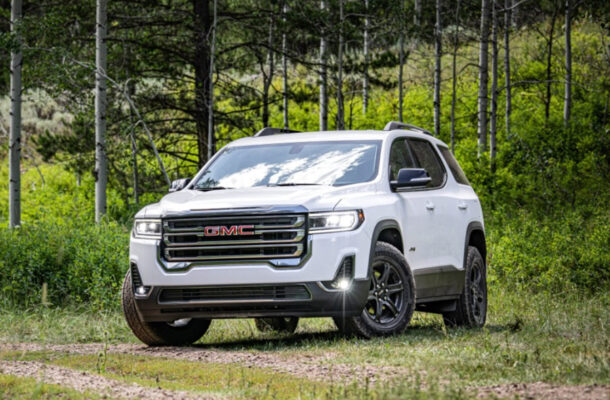 The 2021 GMC Acadia is a mid-size three-row crossover SUV that seats five, six or seven people. Made in Tennessee, it’s much like the Chevy Blazer but with styling that’s a bit boxier and with a more distinctive face. It’s offered with a choice of three engines, with front- or all-wheel drive.

The Acadia has good infotainment, a nice ride, quick acceleration from its turbo-4 and V-6 engines, and above-average road manners. For 2021 it gets Apple CarPlay and Android Auto compatibility on all models, while automatic emergency braking comes standard on the Acadia SLT and optional on the SLE.

The base engine is a non-turbocharged 2.5-liter inline-4 making 193 horsepower with front-wheel drive only, while the optional 2.0-liter turbo-4 makes a much better 230 hp, mated to a 9-speed automatic with available all-wheel drive. It’s relatively quiet and has such strong low-end pull that it makes the 310-hp V-6 (standard on the Denali edition and available on others) feel unnecessary.

About 194 inches in length, most Acadias have a third-row bench, which isn’t very big. The first two rows are comfortable and offer good head and leg room, but because the Acadia is fairly narrow, three passengers in the second-row bench will be squeezed (captain’s chairs come on the SLT model). Cargo space can reach a generous 79 cubic feet with the second and third rows folded.

Automatic emergency braking can’t be had on the base Acadia, although it’s optional or standard on other models. The system includes adaptive cruise control and active lane control.

The Acadia comes in five models: SL, SLE, SLT, AT4 and Denali.

The SLE, for about $35,000, adds drive modes,18-inch wheels, and satellite radio. Powertrain options expand on the SLE to either the turbo-4 or V-6 engine, and all-wheel drive. Also on its options list are heated and cooled power front seats, a sunroof, Bose audio, a power tailgate, and a safety bundle that includes automatic emergency braking.

The Acadia AT4 is a unique model. It has two rows of cloth seats, 17-inch black wheels, the V-6 engine, and off-road hardware.

With its square and upright front end, its big grille and LED headlights, the Acadia has a presence. The bluff, tall proportions wear just enough chrome—a bit more on the Denali, and a lot less on the more adventurous AT4 with its black trim.

The Acadia has a simple shield-shaped dash and cluster of controls. The slick 8.0-inch touchscreen might be the best feature, although it’s nice that there are ample bins for small items, including large cupholders and a storage bin that takes the place of a shift lever, replaced by a pushbutton shifter.

The Acadia SL has 4-way manual adjustment to the front cloth seats, although most other models have power leather seats that are much better not just for the upholstery, but because they have better support with good bolstering.

The second-row bench is narrow for three people, and it doesn’t slide (like in the Chevy Blazer) to make access to the third row easier. So the six-seat SLT with its captain’s chairs is a pleasant alternative. In fact it’s our choice, as it includes the best interior equipment: a power driver seat, heated front seats, leather upholstery, Bose audio, and remote start. Also the best powertrain, with the turbo-4 engine and all-wheel drive, not to mention standard automatic emergency braking.

The third row doesn’t seem very useful, unless you have a third and fourth child who are not very big.

Behind the third row there’s 12.8 cubic feet of cargo space, about the size of a small sedan’s trunk, and when you fold that row down, you get 41.7 cubic feet; fold both rows down and there’s an enormously useful 79.0 cubic feet.

The base 2.5-liter inline-4 makes 193 hp and 188 lb-ft of torque, and even with its 9-speed automatic shifting through its gears sharply, it doesn’t accelerate very quickly.

The 2.0-liter turbo-4 makes 230 hp and a very strong 258 lb-ft of torque. We’ve found it to be the best of the three engines, with quiet acceleration and solid low-end punch from that torque, although the 9-speed transmission, as programmed when mated to this engine, can occasionally stutter. The transmission also has pushbutton controls instead of a lever, which takes some getting used to.

The 3.6-liter V-6 is an option, available on every Acadia save the SL, but it doesn’t seem necessary because the turbo-4 is so good. The V-6 is quiet and strong, and makes 310 hp and 271 lb-ft of torque, but it doesn’t feel much faster than the turbo-4. It definitely sounds sweeter, though.

On every Acadia we’ve driven, the steering is nicely weighted and responsive. The ride is even better: capable, composed and controlled. It’s tuned for everyday driving over all kinds of surfaces, and remains smooth and soft on the models that increase the wheel size from the standard 18-inch to flashier 20-inchers, although the bigger wheels transmit more noise into the cabin.

The all-wheel-drive system doesn’t have a low range for off-road challenges, not even on the AT4 model. However the system includes selectable drive modes that reprogram the throttle and transmission to enable moderate off-road driving.

The 2021 GMC Acadia has rugged looks, but good on-road manners. Of all the choices, we like turbo-4 crossovers the best—that gets us to the Acadia SLT, because of its powertrain, cabin seating, safety equipment, and all-wheel drive.