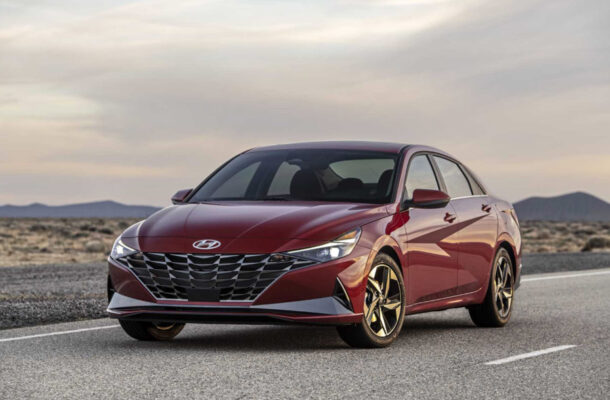 The 2021 Hyundai Elantra is new this year, and for the first time it’s a direct challenger to the Honda Civic—not just in size, but in style and efficiency thanks to a new hybrid model.

The full redesign means more expressive looks that drape its body in angular origami folds. The touchscreen also gets sized up and more standard and optional features can be found on the configurator.

The carryover base engine is the most unexciting of the three available powertrains. It makes 147 hp from a 2.0-liter inline-4, which gets routed to the front wheels via a continuously variable automatic transmission (CVT). The lower-trim variants are rated at 33 mpg city, 43 highway, 37 combined, while the SEL and Limited return a slightly-diminished 31/41/35 mpg due to bigger wheels and heavier features.

Those are impressive fuel-economy figures for a conventional powertrain, but the available hybrid powertrain does one better. With a 1.6-liter inline-4, 1.3-kwh battery, and a small electric motor, the 139-hp Elantra Hybrid should return an EPA-estimated 53/56/54 mpg in SEL trim or 49/52/50 mpg as a Limited.

Performance aficionados will want the new Elantra N Line. It starts with the Hybrid’s 1.6-liter inline-4 but affixes a turbo instead of an electric motor. The result is 201 hp that gets churned through either a 6-speed manual or a 7-speed dual clutch automatic. Expect fuel economy of 28/36/31 mpg with the automatic and 25/31/28 mpg with the manual.

The base Elantra SE begins at $20,645. It has 15-inch wheels and gets features like an 8.0-inch touchscreen with wireless Apple CarPlay and Android Auto, dual USB ports, cloth upholstery, and power features.

The N Line starts at $25,095. Besides its turbo engine, the N Line gets upgrades like an independent rear suspension, leather-and-cloth-trimmed seats, and wireless smartphone charging.

The Limited, which is also available in Hybrid trim, begins at $26,445. Standard features include leather upholstery, wireless charging, adaptive cruise control, and heated front seats. The touchscreen is sized up to 10.3 inches but loses wireless smartphone compatibility; you’ll need a USB cord to use Apple CarPlay and Android Auto.

The styling of the new Elantra takes the small car in an entirely new aesthetic direction. Gone are the swoops and arcs of the old model; in are a multitude of creases and folds. From afar, the car seems all hard angles and chamfered edges, as if it were a mock-up design study still waiting for a final sanding. One thing is for sure: this is a far more exciting shape than what it replaces.

This new Elantra has grown. Total length is up three inches over last year, while the wheelbase creeps up an inch. The size difference between this and the mid-size Sonata is reduced from thirteen inches to ten. Compared to the Honda Civic, the new Elantra is about an inch longer.

The design is clearly new for the Elantra and fairly compelling. The interior’s more plain, with a tall barrier erected between front passengers.

The snazzy screens make up for some of the loss of a feeling of openness. Most models get an 8.0-inch touchscreen, while the Limited gets a 10.3-inch affair. Both get Apple CarPlay and Android Auto, but wireless capability is limited only to the smaller screen.

Limited models also sport a 10.3-inch digital instrument cluster, which adds a dash of luxury to the cabin. You won’t find such a techy feature in the likes of Honda Civic or Toyota Corolla.

One thing that carries over is good outward vision from the driver’s seat.

The back seat is roomy, with 38 inches of leg room, but head room is a bit tight due to the more aggressive roofline.

Trunk space stands at 14.2 cubic feet, down just 0.2 cubes from last year. The rear seatbacks fold down to enable bulkier cargo to fit.

The different powertrain options each imbue the Elantra with a unique personality. Common traits among all three cars? A quiet ride, nicely-modulated braking action, and better suspension compliance compared to the preceding generation. Drive any Elantra, even the base model, and you won’t feel like this is a cut-rate car built to a price.

You also won’t think it’s very fast, however, at least in base form. With 147 hp from a 2.0-liter inline-4, the standard Elantra powertrain leaves something to be desired in terms of acceleration and response. It’s behavior isn’t ill-mannered or unrefined, just leisurely. The CVT has been programmed to mimic an automatic, but it doesn’t perform with any more urgency because of that.

The 139-hp Hybrid isn’t really faster than the base model, but it does solve our CVT woes by instead employing a 6-speed dual-clutch automatic. The gearbox, along with the electric motor’s instant torque, make the Hybrid slightly more responsive around town and a touch snappier off the line. But the real reason to buy the Hybrid is for the 54 mpg combined EPA rating. That’s Prius territory, and about as good as it gets for a hybrid. Anything more efficient needs to be plugged in every night.

Though it isn’t anywhere near as efficient, the N Line is our favorite Elantra hands down. The reason is its 201-hp 1.6-liter turbo-4. With an extra 50-odd hp versus the base model, the N Line feels positively quick compared to the rest of the Elantra lineup, even though 0-60 mph remains a seven-second affair. The N Line’s available dual-clutch automatic does a deft job of picking gears, too.

The N Line also gets a unique independent rear suspension in place of the standard torsion-beam rear end found on the base cars. The more sophisticated chassis design provides more neutral handling and higher cornering limits, especially over rougher asphalt.

The 2021 Hyundai Elantra makes several steps forward in technology, efficiency, and style. We’re particularly enamored with the N Line, which looks to be a tempting alternative to the 205-hp Civic Si. Most buyers, though, will be happiest with an SEL Hybrid, which combines excellent gas mileage with plenty of features.