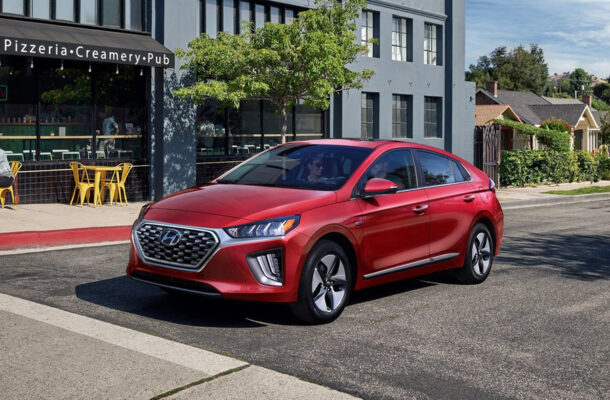 The 2021 Hyundai Ioniq is a five-seat hatchback that comes in hybrid, plug-in hybrid, or electric versions. It’s an excellent value and one of the most efficient cars you can buy. For 2021 it has carried over from the prior model year, unchanged.

The Ioniq has a handsome shape that isn’t especially adventurous; Hyundai wanted it to look conventional, and not to flaunt its electricity. It has a friendly face, a sloping roof, and user-friendly instrumentation.

Its 139-horsepower hybrid system brings an EPA-rated 58 miles per gallon combined. The Electric model has a range of 170 miles. The Plug-In Hybrid is good for 29 miles of all-electric driving. All have modest acceleration and no-nonsense handling. It only comes with front-wheel drive.

The Ioniq excels as a car for a daily short commute. The cockpit is organized like a sewing basket, neat as a pin, and the front seats, with a low driving position, have ample support. It’s less welcoming in back, because of its aerodynamic low roofline, but there’s more than 26.5 cubic feet of cargo space.

The Ioniq Plug-in Hybrid can go for 29 miles before the gas engine kicks in, for a 52-mpg combined rating, or a net of 119 MPGe.

The Ioniq Electric can go for 170 miles before it needs a recharge, as tested by the EPA, with a calculated mileage of 133 MPGe. It’s only sold in the states that conform to California’s ZEV rules.

The 2021 Ioniq hasn’t been safety-tested, although the IIHS called it a Top Safety Pick in the past, Standard safety equipment includes automatic emergency braking, active lane control, and automatic high beams. Blind-spot monitors and adaptive cruise control are optional.

The Hybrid Blue starts in the mid-$20,000s, and comes with power features, automatic climate control, keyless start, 15-inch wheels, and an 8.0-inch touchscreen with Apple CarPlay and Android Auto compatibility.

The Ioniq SE costs a couple of thousand more and adds a digital instrument cluster and a power-adjustable driver’s seat.

For about $28,000, the Ioniq Plug-In Hybrid SE gets adaptive cruise control, while the SEL gets LED headlights for a couple grand more.

The Ioniq’s sweeping hatchback shape is quite tidy, handsomer and more organic than the Prius. If Hyundai’s intent was to ignore (if not conceal) the fact that it’s powered by batteries, it succeeded. LED lighting complements the modern design.

The Ioniq Hybrid cockpit is plain, with an economy-car look exhibited by inexpensive materials, namely plastic and fabric trim. The Electric, however, is awash in touchscreens, digital displays, and buttons that replace shift controls.

Front passengers have ample comfort and room. They sit low in thickly bolstered seats wrapped in grippy fabric, or leather on the higher trims. The Ioniq is short and low, but it’s also wide; shoulder room is good in front.

In back, two average-sized adults will fit, but head room is tight, even though the back bench is mounted low. That’s the price of fuel economy, and result of the aerodynamic low roofline.

The back seats flip forward to increase storage space to as much as 26.5 cubic feet in the Hybrid, or 23 cubic feet in Plug-In or Electric models, on account of their battery packs.

The Ioniq cabin keeps out most road noise, though some engine sounds slip in, when the Hybrid is on full song.

The Ioniq Hybrid starts with a 1.6-liter inline-4 engine making 104 horsepower, and mates it to a 43-horsepower (32-kw) electric motor and a 1.56-kwh lithium-polymer battery. That brings a total of 139 horsepower, carried to the front wheels via a 6-speed dual-clutch automatic transmission. The Hybrid’s curb weight is only about 3,000 pounds, but that’s still heavy enough to drag down the acceleration. However, maybe because of the dual-clutch transmission instead of a CVT, the Hybrid doesn’t feel as slow as the stats say it is. And what do you want, or expect, for 58 miles per gallon?

The Ioniq has paddle controls that let the driver control its regenerative braking; it engages smoothly and the system is integrated well.

Ioniq Plug-In Hybrids use the same drivetrain, but their battery is increased to 8.9 kwh. Acceleration isn’t much quicker, but you get 29 miles of electric driving before any fuel is used; if your daily commute is short, it can be as cheap to run as an all-electric car.

The Ioniq rides well on its multi-link rear suspension, even the Hybrid Blue with its hard, low-rolling-resistance tires. But its handling is hardly sporty, with numb steering. If it weren’t for that, there might be some nimbleness, given its low weight and low center of gravity, thanks to a low placement of the batteries.

The 2021 Hyundai Ioniq hybrids and electric car offer great efficiency. For value, we like the the Hybrid Blue. It’s very well-equipped, with active safety equipment and a good touchscreen and infotainment, not to mention the terrific warranty. It’s sleek and handsome on the outside, where there’s a lot of cargo space