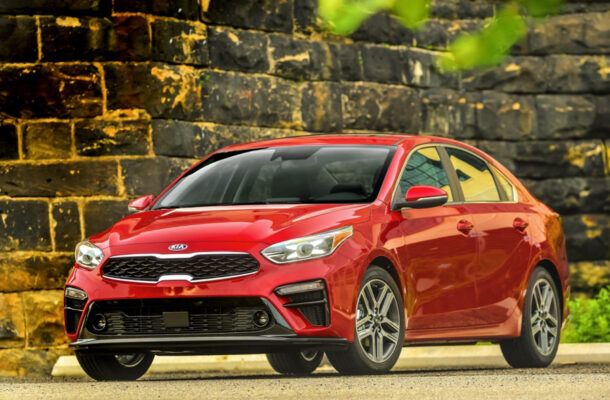 The 2021 Forte is classic Kia: small in size, modest in price, and big in value, particularly for those who prefer a trunk to a hatchback.

No major changes have been made to the 2021 Forte, which was last redesigned two years ago.

Nearly every Forte features a 2.0-liter inline-4 that makes 147 hp sent through a continuously variable automatic transmission. The lone exception is the GT, which sports a 1.6-liter turbo-4 good for 201 hp. It comes standard with a 7-speed dual-clutch automatic, though a 6-speed manual is optional. All models are front-wheel drive.

The thriftiest model is the base FE, which strips out a few amenities in order to hit 31 mpg city, 41 highway, 35 combined with the CVT (or 27/37/31 mpg with its standard manual transmission). Higher-trim cars with the base engine return 29/40/33 mpg.

The GT sacrifices efficiency for sport: its extra 50 or so horsepower results in an EPA-rated 27/35/30 mpg with the dual-clutch or 25/32/28 mpg with the manual.

On the safety front, the Forte earns four out five stars from the NHTSA. The IIHS publishes “Good” crash-test scores, while it calls the base headlights “Poor.”

Automatic emergency braking, active lane control, and a driver-attention monitor are standard, and blind-spot monitors come with all the top three trims. Adaptive cruise control is optional on most trims, including the top-spec GT.

The base Forte FE is reserved for the hypermilers. Starting at $18,885, it achieves its attractive price point by mounting the Forte with small 15-inch wheels and skipping lots of additional equipment. It comes standard with a 6-speed manual, cloth upholstery, and an 8.0-inch touchscreen with Apple CarPlay and Android Auto.

The $20,385 LXS is where most buyers will want to start shopping. Besides making the CVT standard, the LXS offers split-folding rear seats, 16-inch wheels, and multiple drive modes.

Spend another $2,300 and you can get the $23,785 GT. This pairs the GT-Line’s sporty touches with a 201-hp turbo-4. Among the upgrades unique to the GT are 18-inch alloy wheels, an independent rear suspension, and LED headlights. Other touches include ambient lighting, a power sunroof, Harman Kardon audio, wireless device charging, and parking sensors.

The $24,085 EX doesn’t get the big engine but does feature many of the GT’s creature comforts. Other amenities on the EX include dual-zone climate control, heated and cooled front seats, and navigation.

The Forte doesn’t try to tread any new stylistic ground. It looks like, well, a sedan: a defined three-box shape wearing harmless styling. The front and rear ends don’t convey any attitude, and you won’t find bristling details or massive air dams or even strongly-defined body creases. It’s a vanilla design, handsome and inoffensive.

The GT and GT-Line try to stir things up with a small spoiler and a few other touches, but the 18-inch wheels are about all that give it away. Otherwise, it’s a bit of a sleeper sporty compact; there’s none of the posturing that’s evident in the Honda Civic Si or Volkswagen Jetta GLI.

Simple, straightforward, and attractive, the Forte’s interior feels a class above its price point thanks to details like the stylish round air vents and tasteful trim. Higher trims like the GT-Line and EX are particularly nice, as they drape a few more soft-touch textiles over the dash and door panels.

The centerpiece of the cabin is the 8.0-inch touchscreen. It comes standard with Apple CarPlay and Android Auto, and navigation is optional. The infotainment software is easy to use and doesn’t present much of a learning curve.

Comfortable seats can be upholstered in either cloth or synthetic leather; the latter feels and looks durable. We like the base cloth seats, despite their limited manual adjustment. The GT and GT-Line have the most aggressive bolsters of the lineup, but they don’t sacrifice comfort for the extra lateral support.

The Forte’s 15.3 cubic feet of trunk space is generous for a small sedan, but if you want more flexibility with carrying cargo you’ll need to skip the base model—it’s the only trim that doesn’t come standard with a split-folding rear seat.

The Forte is a lot of car for the price. Its engine matches the Honda Civic for fuel economy. Handling is fine for an urban commuter, too. We just wish the Forte let less noise into the cabin, and that its CVT changed its ratios more quickly.

The 201-hp turbo-4 in the Forte GT is joined by an independent rear suspension, and the upgrades make for a better car. It’s quicker than the rest of the Forte lineup and handles more crisply, too. It’s the best-driving Forte, with the best chassis by a wide margin. The upgraded suspension markedly improves the ride, so it still handles bumps well despite its 18-inch wheels.

The only drawbacks are a bit of torque steer when pushed particularly hard and a dual-clutch transmission that can be recalcitrant at times. The available 6-speed manual fixes the latter issue, however.

The 2021 Kia Forte is a strong value in a competitive segment. With good fuel economy, great value (including an excellent warranty), and engaging performance, we’d buy the Forte GT.