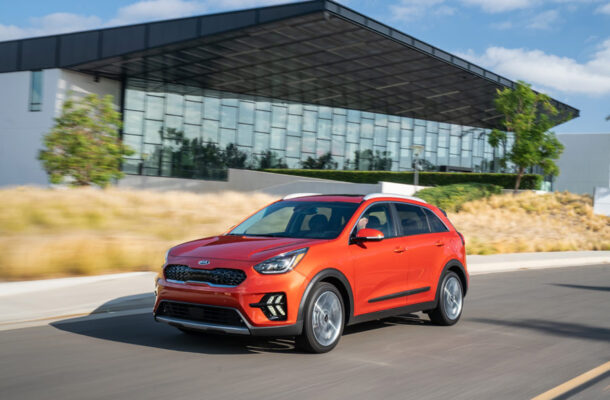 The 2021 Kia Niro seeks to dethrone the Toyota Prius as the reigning hybrid champ. It comes close in efficiency and bests the Prius with its battery-only model.

For 2021, the Niro gets a few tweaks, including wireless Apple CarPlay and Android Auto. Other updates include a smarter adaptive cruise control and wider availability of remote start.

The Niro offers a range of powertrains on a front-drive platform. The base model uses a small electric motor in tandem with a 1.6-liter inline-4 engine to produce 139 horsepower and 195 lb-ft of torque. It returns fuel economy ranging from 53 mpg city, 48 highway, 50 combined on the base trim to 46/40/43 mpg on high-zoot models with bigger wheels and more amenities.

A plug-in hybrid is also available. It uses the same basic powertrain as the standard hybrid but swaps in a much larger battery. The extra juice allows for up to 26 miles of all-electric driving, according to the official EPA estimate. It gets 105 MPGe when operating as a hybrid and 46 mpg combined when running just the gas engine.

If that isn’t green enough, an all-electric version is also offered. It tosses the 1.6-liter engine in favor of an electric motor that makes 201 horsepower and 291 lb-ft of torque. It gets to 60 mph in about 6.5 seconds, making it the fastest Niro of the bunch, and delivers more than 200 miles of range.

For a brand that is usually generous with standard safety gear, the Niro is oddly stingy with many of the driver aids buyers have come to expect. The base Niro doesn’t get automatic emergency braking, which is reserved for the next trim up, the LXS. That model also comes with blind-spot monitors and active lane control. Adaptive cruise control and a more advanced emergency braking system are standard on the top two trims.

Crash-test stores are average: four stars out of five from the NHTSA and a “Good” rating from the IIHS in most of their tests. It isn’t a Top Safety Pick due to the lack of standard automatic braking.

The base $25,865 LX is the thriftiest Niro. Its standard equipment includes an 8.0-inch touchscreen with wireless smartphone compatibility and little else. Cloth seats, 16-inch wheels, and dual-zone climate control are all part of the package.

The LXS goes for $27,265 and adds active-safety features.

At the top of the lineup is the $34,125 EX Premium. It is the most luxurious here with a 10.3-inch touchscreen, a heated steering wheel, heated and cooled front seats, wireless smartphone charging, and leather upholstery.

Not much gives away the efficiency of the Niro. Despite a low ride height and an exclusively front-drive platform, the styling is classic pseudo-crossover. It gets chunky black fender flares, roof rails, and a hulking body that looks taller than it is. Despite the specs sheet saying this is a hatchback, the look is all crossover.

Having been around since 2018, the styling is reflecting Kia’s older design motifs. The look of the new Seltos, Sorento, or Telluride isn’t really reflected in the Niro’s small, pinched grille or the slicked-back headlights. It looks more like the Sportage than anything, which is another long-tenured Kia crossover.

The Niro’s cabin is pleasant and attractive, outfitted with quality materials and aluminum trim that adds a nice splash of color and contrast. An array of buttons around the rotary shifter looks a bit confusing at first, but all in all there’s lots of ergonomic goodness to be found here.

The centerpiece of the dash is the 8.0-inch touchscreen, but it doesn’t dominate the interior as it would in a Tesla. Instead it sits recessed, a part of the dash rather than a monument to it. The new wireless smartphone capability for 2021 also makes the infotainment easier than ever to use.

Leather is only standard on the top trim, but we’re happy with the cloth buckets that come standard. They are firm but not too much so and offer enough lateral support for long drives. We wish heated seats were more widely available, but if it’s any consolation cloth is much less affected by temperature swings.

The back seat has 39 inches of leg room, making it plenty spacious for all riders. Big door openings and large windows give it an airy vibe.

With up to 55 cubic feet of cargo area, the Niro has ample cargo space when the rear seats are dropped. Leaving the seats upright leaves room for just 20 cubic feet of cargo, which is about on par for a crossover of this size. For reference, the Toyota Prius has more room behind its rear seat but is 5 cubes shy of the Niro’s maximum cargo capacity.

There isn’t anything remarkable about how the Niro drives—and that’s precisely the point. Kia wanted to make their hybridized crossover as straightforward as any gas-engined alternative, and they’ve succeeded. Five minutes behind the wheel of any Niro and you’ll likely forget that electrons are doing most of the work.

On the more affordable end of the scale, the base hybrid isn’t a scorcher—it takes well over eight seconds to get to 60 mph—but has an affable, easygoing persona. The 195 lb-ft put forth by the 1.6-liter inline-4 and its electric assistants is most helpful around town and keeps the Niro feeling perky. Highway passing takes a bit more time but isn’t out of the question.

Most impressive? The fuel economy, of course. With EPA ratings as high as 53 mpg city, the Niro nips on the heels of the 58 mpg city of the Prius.

The plug-in hybrid adds the ability to drive 26 miles without a drop of gas. Piloting it around feels largely the same as the base model—it’s quiet and refined, with more verve jumping between stoplights than powering up an onramp. It’s clearly an evolution of the base hybrid, and for those with short commutes it might be worth paying a premium for. On that note, it’s worth mentioning the Niro PHEV qualifies for a federal tax credit.

The all-electric Niro remains a pricey but intriguing alternative. Kia only sells it in Texas, Hawaii, and a handful of coastal states. We think that’s a shame. The EV is an impressive piece; it doesn’t suggest that it’s mostly identical with the hybrid and PHEV variants. It feels quick off the line and the underfloor battery settles and stabilizes it at highway speeds. The EV weighs another 700 pounds than the regular Niro, but the extra pounds don’t add flab, only a sense of heft.

With the extra weight, the EV has the superior ride on the interstate, but on backroads the hybrid and PHEV models do a better job negotiating corners. The regenerative braking on the EV doesn’t help much with brake pedal feel, though it does limit the need to stab at the brakes; lifting off the throttle is enough to slow it down considerably when the EV is dialed into its most aggressive regen mode.

The 2021 Kia Niro is ushering the future of automobiles as competent if rather unexciting transportation devices. It isn’t sexy or fun or thrilling, but as a way to get from A to B it really can’t be beat. This is a commuter that does almost nothing wrong.

With three very different powertrains to choose from, your choice should be based on your driving needs and how ready you are to embrace the future. Those with long commutes and who pile on the miles will want the base hybrid; short runs are best with the PHEV or EV. Our choice of trim? The Touring or EX.