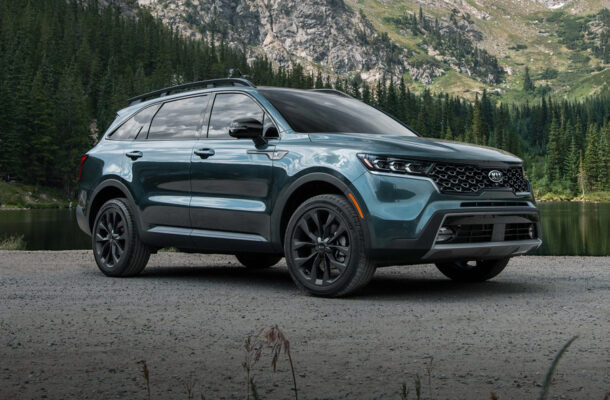 The 2021 Kia Sorento takes some major inspiration from the mega-hit Kia Telluride, in styling if not in road manners.

The Sorento’s upgrades are extensive. Besides the styling and revised interior, there’s more technology, new engines, and an improved ride.

The old Sorento offered two powertrains; both have been retired in favor of four new engine choices. These range from a base 191-horsepower 2.5-liter inline-4 to an as-yet unreleased plug-in hybrid. In between slots a turbocharged version of the 2.5-liter engine making 281 horsepower and a 1.6-liter hybrid that produces 227 horsepower with the help of a small electric motor.

Standard safety equipment includes automatic emergency braking, active lane control, and adaptive cruise control. All models but the base trim further include blind-spot monitors and parking sensors. Higher up the food chain buyers can opt for a surround-view camera system.

The Sorento has yet to be crash-tested.

Five trims make up the Sorento lineup. The base trim is the $30,565 LX, which comes with cloth upholstery, an 8.0-inch touchscreen with Apple CarPlay and Android Auto, 17-inch wheels, and LED lights.

Moving into the $33,065 S trim adds 18-inch wheels, synthetic leather upholstery, a 10-way power driver’s seat, automatic climate control, and heated front seats. It comes standard with the base 2.5-liter inline-4 but is also available with the hybrid powertrain; hybrid versions begin at $34,765 and feature 17-inch wheels and a second-row captain’s chairs.

The mid-level EX begins at $36,165. It’s powered by the 2.5-liter turbo-4 and comes with wireless device charging, adaptive cruise control, and second-row captain’s chairs. The $37,765 EX Hybrid also gets a rear spoiler and panoramic sunroof.

The new Sorento offers a major styling departure from its recent past. The front end is the most dramatic angle, where a more blunt face and slimmer headlights now reside. It’s a handsome look, tough and contemporary. The other crossovers in the family tree only share a vaguely similar grille.

The Sorento’s rear fascia is more in line with other Kias, especially the Telluride. The liftgate has been emboldened with lettering spelling out ‘Sorento,’ and the sharp-edged vertical taillights lend some pizzazz to the hatch. Strong creases and hard angles replace the softer lines of the outgoing version.

Initial reactions to the posh-looking interior suggest Kia has done a commendable job bringing high-dollar style to a low-buck crossover; a closer look reveals some kitschy detailing, such as its game-controller-like air vents.

The infotainment is beamed through via an 8.0-inch touchscreen or, on pricier trims, a 10.3-inch screen. Of the two, only the smaller screen features wireless Apple CarPlay and Android Auto; bring your cords for the 10.3-incher. Overall, the infotainment software works well thanks to a logical menu structure and quick responses.

The front seats are comfortable and supportive, but the cushions steadily thin out as you move from the first to third row. That rearmost row is a letdown: it features just 29.6 inches of leg room and the seat feels hardly off the floor. It simply isn’t adequate for adults for any amount of time.

Cargo space, however, is substantial. Fold down the near-useless third row and there’s 38 to 45 cubic feet of space depending on the position of the adjustable fore/aft second-row. With both rows folded over 75 cubic feet of cargo space opens up.

The many engines on tap give the Sorento some real breadth of capability. They provide varying degrees of pleasant speed, handling, and efficiency.

The base 2.5-liter inline-4 provides adequate acceleration, but the accolades end there. The turbocharged version boosts output by nearly 100 horsepower, from 191 hp to 281 hp. The extra power goes a long way in improving drivability and impromptu passing. We think the extra power is worth the money, especially if you’re apt to load up the Sorento with passengers and gear.

Our only issue with the turbo-4 has nothing to do with the engine. It’s the 8-speed transmission and its occasionally delayed downshifts. It’s tuned for maximum fuel economy—but we prefer it in its quick-shifting Sport mode.

The hybrid features a 1.6-liter inline-4 mated up to a 44-kwh electric motor and a small battery. Total output is 227 horsepower. In theory it should be faster than the 191-hp base engine, but the added weight of the hybrid componentry negates the additional power. But the focus here is on fuel economy, and in that regard the hybrid manages 39/35/37 mpg. That’s better than the hybridized variants of both the Ford Explorer and Toyota Highlander. A plug-in version is on the way.

All Sorentos ride well, with a plushness appropriate for the segment. Drive over some rough patches of road, however, and the suspension can be noisy, though the ride remains serene enough.

The 2021 Kia Sorento is a pleasing family car in almost every respect. It offers a new hybrid model and a third-row seat for maximum flexibility. Our pick is a Sorento EX for its long list of features and the standard turbo-4 engine.