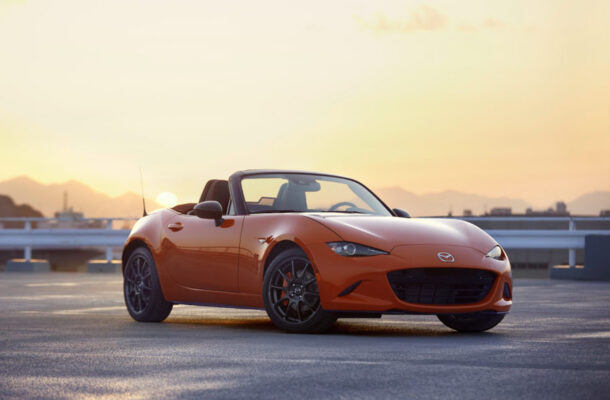 Nothing evokes the best of sports cars past and present quite like the Mazda MX-5 Miata. It’s small, impractical—and a joy to drive. The two-seat, rear-drive roadster is now in its fourth generation, and was upgraded with a new engine two years ago.

All 2021 Miatas gain standard Apple CarPlay and Android Auto capability; Apple users can connect wirelessly, though those with Android continue to need a cord. As in prior years, the Miata comes as a traditional ragtop or with a power-retractable hardtop, the latter known as the RF.

All Miatas use a 2.0-liter inline-4 that goes without turbocharging. The latest model makes 181 horsepower and 151 lb-ft of torque, which runs through either a 6-speed manual or a 6-speed automatic.

The Miata hasn’t been crash-tested.

Buying a Miata is easy: do you want a bare-bones sports car, something a bit better suited for track use, or a nicely equipped convertible? Each of the Miata trims answers to those needs, but all share the same fabulous DNA.

The base Sport, at $27,775, has power windows and locks, cloth upholstery, keyless entry, and a 7.0-inch touchscreen with smartphone capability.

The Club is geared toward the serious driver with its limited-slip differential and 17-inch wheels. It’s also the only trim to offer the available Brembo/BBS/Recaro package, which comes with, well, Brembo brakes, BBS wheels, and Recaro seats. That package costs $4,670, a steep ask on a model with a $31,235 base price.

The Miata looks like the little bundle of joy that it is. The latest styling efforts have tried to exorcise the old happy-go-lucky visage of prior generations, but even with the 2021’s slim headlights and big grille we can’t help but see a car that looks like it’s laughing at life. Still, this is the most mature-looking Miata yet.

The sculpted body looks natural on the tiny wheelbase, which only measures 90.9 inches long; the overall length is a pert 154 inches. These figures earmark it as one of the smallest cars you can buy new.

Sitting in the Miata is a cozy and intimate experience. It only seats two, and both the driver and passenger better be close friends. That can make for some awkward elbow-bumps, especially when shifting into the higher gears. It’s pretty clear that ridesharing wasn’t a priority when designing the interior.

Other ergonomic idiosyncrasies confound us as well. The radio, for instance, which requires setting all the presents via a small dial in the console. It’s tedious. The 7.0-inch touchscreen hides menu icons in the corner of the screen and limits functionality while the car is moving.

From the driver’s seat, the closeness of all the controls and the nearness of every interior corner is startling; it feels like Mazda vacuum-packed the cabin. Even other small sports cars don’t feel quite so compact as the Miata. Anyone not used to such small cars will want to acquaint themselves with the tiny cabin before setting off.

You also won’t find much storage space of any sort in the Miata. Slim door pockets can swallow a road map, a cell phone, maybe a magazine or two. The console and glove box are small but handy for small things. Occupants who don’t scoot the seats to their rearmost position can stash some stuff in the rear alcove. The trunk’s 4.6 cubic feet is good for a few grocery bags or a small duffel, but not both.

The 2,500-pound Miata is a rare treat these days, an era where too many sports cars are 3,500 pounds or more of turbos and electronics. While those cars have far more horsepower and prodigious capability, the Miata has an air of the elemental about it. It strips out excess for purity. That means a choppy ride and little noise suppression in return for simple thrills. Not many sports cars feel fast at 50 mph on a back road, but the Miata pulls it off.

You need to work to keep speed in the Miata. It’s slow for an enthusiast car, clocking a 7.2-second 0-60 mph time, and if you scrub that speed in a corner it’ll cost you a good lap—or at least will have you impatiently laying into the accelerator on the next straight. But winding out the engine to its 7,200-rpm redline is good fun, and doing so lets you enjoy the rorty noises emanating from the tailpipes.

The 6-speed manual is standard, and anyone buying this car should consider it mandatory equipment. The clutch has a nice takeup to it, and the action is light enough that even traffic won’t leave your left leg sore. Notching the gearshift through the double-H pattern is pure joy, just as it’s been since the first Miata debuted in 1989.

The Miata is an uncompromised car, trading off typical creature comforts and practical accommodations for light weight and driving pleasure. This car is first and foremost a weekend toy, though it will dutifully step in as a daily driver, especially in RF trim. If we were putting one in our garage, it would be in Club trim.