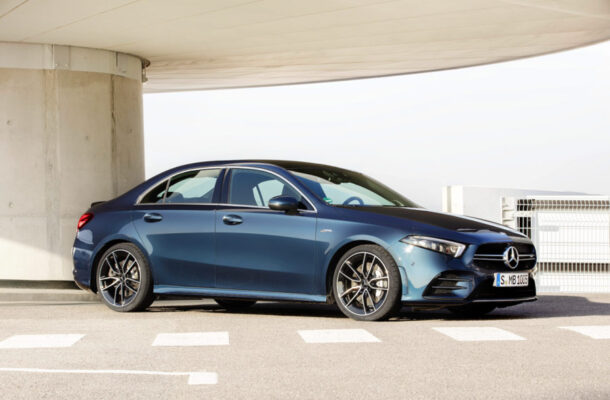 Small luxury sedans don’t come much smaller or much more luxurious than the 2021 Mercedes-Benz A-Class. It’s the most affordable way into the Mercedes family, but don’t think of this sedan as an economy car with a three-pointed star on the hood. Mercedes has done a deft job of making the A-Class feel special—not an easy feat considering the low price.

Like every Mercedes these days, the A-Class features both a pedestrian base engine and a zippy AMG powertrain. The A220 is a 2.0-liter turbo-4 making 188 hp; the A35 AMG uses the same engine but cranks out an impressive 302 hp. Both variants use a 7-speed automatic. Front-wheel drive is standard on the base car, while all-wheel drive is mandatory on the AMG model.

Every A-Class gets standard automatic emergency braking. Features like adaptive cruise control are optional. The A-Class has not undergone crash-testing.

Only two models make up the A-Class lineup, and both are equipped substantially the same when it comes to amenities. The cheaper of the two is the $34,700 A220. It gets 17-inch wheels, power seats, synthetic leather upholstery, a panoramic moonroof, and a 7.0-inch touchscreen with Apple CarPlay and Android Auto.

The A35 AMG sports a 302-hp turbo-4 but otherwise is mostly unchanged from the A220. The only major equipment upgrades are a pair of 10.3-inch screens and 18-inch wheels.

Despite its size, just 179 inches long, the A-Class benefits from appealing proportions and a visual kinship to pricer Mercedes models.

From the front, canted, slim headlights and a forward-leaning prow suggest purposeful motion; it’s probably the A’s most flattering angle. The sides bulge outward despite the big scallop halfway up the door skins. The rear is tidy and classy but not as memorable as the front end.

Glitz and glam is the Mercedes MO, so it’s not surprising the A-Class is decked out with attractive trim and stylish materials all woven together with a high degree of craftsmanship. In more expensive models we come expecting this; at this price point we’re genuinely impressed.

The base model gets a standard 7.0-inch touchscreen and analog gauges, but we wonder how many A-Classes do in fact reach dealers with that setup. The optional pair of 10.3-inch screens class things up so sufficiently that we’d be surprised anyone wouldn’t check the box for it.

Of the two screens, one covers instrumentation and the other, a touchscreen, is responsible for infotainment. The latter features the latest MBUX infotainment system that we’ve found a cinch to use. Voice commands, a console-mounted rotary dial, and small haptic thumb pads on the steering wheel are alternative options for fiddling with menus and changing settings.

Space is the primary compromise with the A-Class. Simply put, it’s a small car and feels like it. The back seat measures just 34 inches, making it a tight squeeze for larger riders. At least the front seats are sufficiently roomy and plenty comfortable.

The trunk measures 15 cubic feet, which is very competitive for this segment.

Its 188 horsepower isn’t much, but the base A-Class hustles around without much issue. Most buyers don’t need more power than that, though they may occasionally be wishing for it in specific situations. Unless you’re regularly snipping off mountain-highway passes, the A220’s modest and fairly refined powertrain should suffice.

The A35 AMG is a different beast. It is more raucous, more visceral, and plenty fun. Adaptive dampers and a uniquely-tuned suspension ensure the chassis can keep up with the eager engine.

A 7-speed dual-clutch automatic is used on both the A220 and A35. It shifts more smoothly than some other dual-clutches, and quickly clicks off gearchanges at the tip of a paddle shift control.

We’ve found the A220 to ride nicely, with plenty of composure and excellent mitigation of bumps and potholes.

It’s easy to build an expensive luxury car; it’s much harder to build an affordable one. The 2021 A-Class accomplishes that difficult feat. We’d have no qualms buying a base A220 for ourselves, though the power of the A35 AMG is tempting.