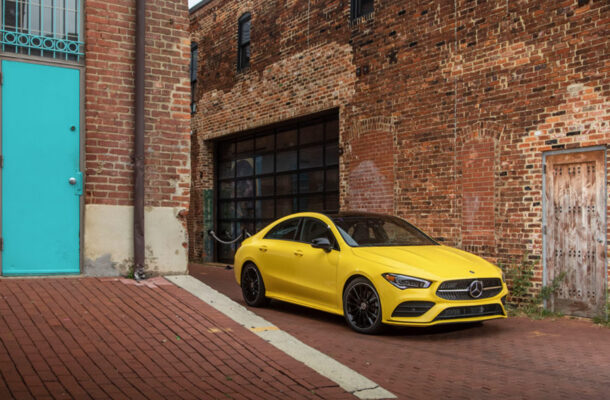 Take a Mercedes A-Class, add a rakish streak to the roofline, mix in a few swoops and curves, and there you have it—the 2021 Mercedes CLA. This sleek small sedan puts style at the forefront, but there’s enough luxury here to make it worthy of the Mercedes badge.

The CLA name has been around for close to a decade now, though the current generation only hit showrooms last year. Updates to the 2021 model are limited to standard blind-spot monitors and ambient interior lighting.

The standard CLA250 generates 221 hp from a turbo-4. Moving into the CLA35 AMG cranks up the turbo-4 to 302 hp; the top-dog CLA45 AMG doles out 382 hp from the same turbo-4. The lesser two versions share a 7-speed dual-clutch automatic, while the top AMG edition has an 8-speed dual-clutch.

The current generation of CLA hasn’t been crash-tested.

The only CLA that doesn’t wear the AMG name is the base CLA250, which starts at $38,845. Besides its 221-hp turbo-4, it gets features such as synthetic leather upholstery, dual-zone automatic climate control, and a panoramic sunroof. A pair of 7.0-inch screens are standard. Apple CarPlay and Android Auto compatibility is included as well.

The $48,845 CLA35 AMG doesn’t add much other than dual 10.3-inch screens and keyless ignition. The big selling point here is its 302 hp and standard all-wheel drive.

The CLA is small, measuring just 184 inches, but Mercedes has successfully scaled down the look of its bigger sedans onto its swoopy compact four-door. It’s an exciting shape, breathing life into the more practical but less alluring A-Class sedan.

The rear bumper and taillights both turn downward where they meet the fenders. On AMG models, this is juxtaposed by the four prominent tailpipes that announce the power lurking underneath the hood.

Some luxury automakers cheap out on their entry-level models. Not Mercedes. Even the CLA250 has a premium feel to it, and some of the brand’s favorite tricks—like the turbine air vents and heavy use of chrome—are here in full.

The dual-screen design stretches across the left two-thirds of the cabin, with the leftmost screen being the customizable gauge cluster and the adjacent screen featuring the touch-enabled infotainment system. The MBUX software works as well here as it does in the pricier models.

Those taking the helm or riding shotgun will appreciate the well-bolstered seats, which keep occupants in place when the road starts to wind. In ordinary driving, though, the bolstering feels excessive.

The back seat leaves us underwhelmed. For starters, leg room is a scant 33.9 inches. That’s compounded by inadequate head room that’s cut short due to the roofline. And because the CLA is so small, the rear doors don’t offer much room to climb aboard. Taller riders could bop their heads getting in. That’s the price to pay for style.

The trunk only holds 11.6 cubic feet, which isn’t much but certainly better than the 8.6 cubes offered by the A-Class.

Every CLA employs a turbo-4, but how spicy that engine is depends on what badge is on the trunk. The CLA45 has almost twice as much hp as the base CLA250, despite sharing the same basic powertrain.

Of course, most buyers of the CLA won’t be shelling out nearly $60,000 for the 45 AMG variant. The most popular option is bound to be the CLA250, and its 221 hp, while not an exotic figure, is plenty for the zippy little CLA. 0-60 mph is expected to take 6.3 seconds, and under acceleration the 250 sounds decent. A 7-speed dual-clutch automatic delivers crisp, quick shifts. The standard front-wheel-drive configuration works fine—we don’t think the all-wheel drive is necessary here.

Mercedes does think it necessary on the high-output AMG models, however, where the extra traction is standard equipment. Also found on both AMG models is a righteous exhaust note and acceleration that ranges from delightfully snappy in the 302-hp 35 AMG to ridiculous in the 382-hp 45 AMG. The latter model gets to 60 mph in 4.0 seconds flat.

With this kind of power, the ride needs to be tuned appropriately, so moving up the performance ladder brings a steadily firmer ride. The optional adaptive dampers help soften things up and are well worth the money.

Don’t buy a CLA for the back seat—buy it for its performance potential, sporty looks, and compact size. The back seat makes it useful in a pinch, but this car is best left alone with the driver, who can enjoy its nimble chassis and straight-line performance. Our hearts say the CLA250 is both the value play and the most logical option. If you choose the AMG models, pay up for the adaptive dampers.