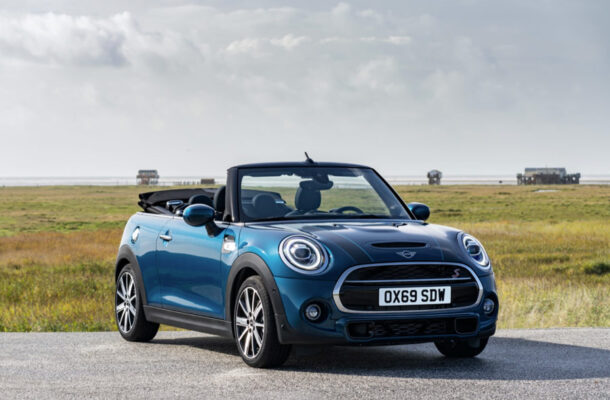 The 2021 Mini Cooper is the latest iteration of a car that manages to be equal parts whimsy and practicality. It taps retro styling to attract shoppers who want to stand out from the usual horde of compact crossovers. The Cooper offers both a hardtop and convertible, can be had with two doors or four, and features a spectrum of powertrains to choose from.

The big news for 2021 is the return of the 6-speed manual. At the very top of the Mini Cooper lineup is a new, limited-edition John Cooper Works GP. The GP is to the JCW what the Z06 is to the Corvette: the ultimate expression of an already potent car. In the case of the JCW GP, this means a 301-hp 2.0-liter turbo-4, no back seat, and massive grafted-on fender flares and a wild spoiler. Despite only being offered with an 8-speed automatic it remains one of the gnarliest front-drive sports cars around.

A 7-speed dual-clutch automatic is offered with the base car, while the rest use an 8-speed automatic. A 6-speed manual is now standard with all models but the JCW GP.

Also on offer: an all-electric SE that uses a single 184-hp electric motor. It returns only 110 miles of range, a far cry from the 250 or so miles of range available in electrics like the Chevrolet Bolt EV or Hyundai Kona Electric.

The government only gave the Mini Cooper four stars out of five for overall crashworthiness, but the IIHS was more generous, bestowing their “Good” rating for each of their tests. Automatic emergency braking comes with each Cooper, but you’ll pay extra for adaptive cruise control and parking sensors.

The Cooper family splits into powertrains and by Classic, Signature, or Iconic trim—as well as by body style. Most versions are available as a two-door hardtop, four-door, or convertible.

In an interesting twist, the cheapest model isn’t the most sparsely equipped. The $20,000 or so Oxford Edition, which was originally designed as an incentive special for students and members of the military, is essentially a Signature-trimmed model with a massive factory discount. Its notable features include a 6.5-inch touchscreen, 17-inch wheels, heated seats, and a panoramic sunroof.

The real base model is the Cooper Classic, which comes with features such as synthetic leather, 15-inch wheels, and a 6.5-inch touchscreen. Pricing for the Classic trim ranges from about $22,000 to $32,000.

The Signature trim adds dual-zone climate control, keyless entry, and a panoramic roof, among other things. Pricing spans $25,000 to $34,000.

The fanciest is the Iconic, which ups the ante with an 8.8-inch touchscreen, leather upholstery, 12-speaker audio, and wireless device charging. Expect to pay $29,000 to $36,000 for one.

For a precious few there is the nearly $50,000 John Cooper Works GP. It’s focused on performance, going so far as to delete the rear seat. Amenities are roughly equivalent to the Signature trim, but there’s no panoramic roof here. Buyers will also find simulated leather/suede upholstery, heated and power-adjustable front seats, and remote start.

Retro, when done right, will feel more like a homage than a rip-off. Most such cars miss the mark on this; not the Mini. It manages to honor the original 1960s icon without feeling kitschy or overly nostalgic.

The throwback intention of the design is clear, but it’s been interpreted in a modern way. Details like the round headlights, two-box body, and nonexistent overhangs ape the original. The stance, the centrally-exiting rear exhaust, and the more nuanced and complex body stampings are reminders this Mini is a 21st century job. Yet all those contemporary tweaks can’t dilute its faithfulness to the original.

The interior leans retro as well: throwback touches include toggle switches for switchgear and a near-nonexistent console harboring a prominent upright gearshift.

No longer does Mini insist on mounting a massive circular speedometer massive smack-dab in the middle of the dash. The circular motif of the dash remains, but a touchscreen now resides within its chrome-ringed diameter. The lower two trims use a 6.5-inch screen; the upper trims an 8.8-inch unit. Unfortunately, Apple CarPlay still isn’t standard, but at least Mini now offers it on the smaller screen as well; last year it was only available with the 8.8-inch unit.

With so much glass area and an upright seating position, the driving position is commanding despite the low-slung, diminutive nature of the car. It at once feels both large and cozy, but never feels tiny, cramped, or unwieldy.

The back seats, however, are a different story. Leg room is just 30 inches on two-door models; four-door models add less than two inches to that figure. Essentially, the Cooper’s second row is about as comfortable as the typical third-row of a medium-sized crossover. At least the big windows afford a good outward view.

Though the back seat is small, cargo space is a bright spot: 34 cubic feet of space with the rear seats down. Keep the seats up and you’ll have to work with just 8.7 cubic feet.

The original Mini became an icon as much for its styling and practicality as for its playfulness. Today’s Cooper lives up to the heritage. The small size—in two-door form it weighs less than 3,000 pounds and is shorter than a Miata—lends it a certain agility that can’t be denied. This is present regardless of what engine is under the hood.

Even the turbo-3, which sounds underwhelming, can still play nice with the light, tossable chassis. Despite only making 134 hp, the entertainment factor is high. Cheap thrills don’t come much more cheaper or thrilling than this, Miata notwithstanding.

Our favorite engine is the 2.0-liter turbo-4 in the S. It sings to the tune of 189 hp, and in a car of this size and weight we think that figure is just about perfect. You don’t need the John Cooper Works to feel fast in a Cooper; this engine pulls it off just fine. It’s responsive, snappy, and snaps off 6.5-second 0-60 mph runs without blinking. Other than the JCW and JCW GP, the Mini is composed but firm when driving over bad asphalt.

The JCW ups the ante with a 228-hp turbo-4 and some trick features like Brembo brakes and a limited-slip differential. It’s fun and all, but we say stick with the significantly cheaper S or go for the all-out JCW GP, a 301-hp track monster that is monstrously fast, back-breaking stiff, and loud as a compressor room. It sacrifices comfort on the altar of performance and feels best suited for the track.

The Mini Cooper is practical yet fun. It brims with character. Our favorite model is the Cooper S in Signature trim, but we could be sold on an Oxford Edition for its unbeatable value.