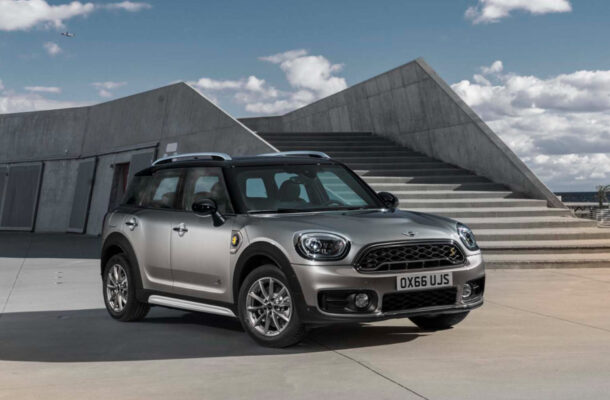 The 2021 Mini Countryman blends the space and practicality of a crossover with the distinctive style of Britain’s favorite compact hatchback.

The 2021 model gets some minor revisions, including new Union Jack taillights, a redesigned front end, and new wheel and color options. Inside, the 8.8-inch touchscreen is now standard on all but the base trim.

The fourth choice is a plug-in hybrid that’s sold under the SE moniker. It gets a 10-kwh battery and a small electric motor affixed to the turbo-3. Total all-electric driving range is just 17 miles, during which it returns 73 MPGe.

Safety equipment found on all Countryman models includes automatic emergency braking and not much else. A $1,250 Driver Assistance Package bundles adaptive cruise control, parking sensors, and a head-up display.

The NHTSA hasn’t tested the Countryman, but the IIHS awarded it a “Good” rating in all their tests.

Like other Minis, the Countryman offers three or four trim levels for nearly all engine options; the SE isn’t available in base Classic trim but can be had with either Signature or Iconic trimmings. Pricing for each trim depends on which engine lies underhood.

The new base trim for 2021, the Oxford Edition. It bundles upmarket features like heated seats and 18-inch wheels to the list of equipment offered by the Classic, which has traditionally been the entry-level trim. It costs $27,350 and is exclusively offered with the turbo-3 engine.

The Mini Countryman leans heavily on retro cues to visually distinguish itself. The Mini heritage comes across in the mirror caps, wheel arches, and door handles, not to mention the overall shape and fascias.

Those fascias were massaged this year, and we think the Countryman is the better for it. The new grille is cleaner and more mature; the taillights go in the other direction with their whimsical Union Jack motif. That touch nicely encapsulates the Countryman’s vibe: raffish, retro, and not interested in taking itself too seriously.

The Countryman’s cabin is dominated by a large circular housing that frames the infotainment screen, That, along with the myriad toggle switches used in lieu of buttons, is all that’s retro about the interior. Everything else is modern fare: the BMW-esque shifter, the high-quality materials and switchgear, and the nicely-sized three-spoke steering wheel are all hip to the current moment.

Back to the infotainment: harbored within that big circular surround is either a 6.5-inch display screen or a 8.8-inch touchscreen. Only the latter offers Apple CarPlay, and it isn’t standard. As for Android Auto, it’s not available.

The Countryman has excellent visibility from its big windows, and from the front seat drivers get something of that coveted high seating position that helps sell so many crossovers. Drivers feel at the helm in the Countryman, not below-deck.

It helps that the seats are comfortable thrones. All models feature excellent lateral support, but JCW examples go one step further with their more aggressive bolstering. Chances are the seats will be shod in synthetic leather, but the real stuff is available.

Head room is a boon in the back seat; that, along with the 37 inches of rear leg room, means taller riders won’t be complaining if the driver decides to take a detour. With up to 48 cubic feet of cargo space, the Countryman has ample cargo space.

Lots of powertrain options give the Countryman a range of personalities, from the juvenile JCW to the laggard base turbo-3. All have one thing in common, however: the zippy, immediate handling that has always characterized Minis. Even though the original Cooper is still more fun, the Countryman has just enough of its DNA to ensure it’s more rewarding to drive than the competition.

That verdict holds true for the base model’s 1.5-liter turbo-3, but its 134 horsepower is challenged by 3,500 pounds of Countryman. It takes nearly 10 seconds for it to get to 60 mph.

For that reason, we recommend stretching for the 2.0-liter turbo-4 in the S trim. It brings an extra cylinder and another 55 horsepower to the party, which is enough to awaken the Countryman and give it some verve. The 0-60 mph sprint is cut down by over two seconds compared to the turbo-3.

If that still isn’t enough power, the JCW brandishes 301 horsepower from a hotted-up, BMW-derived turbo-4. Expect 0-60 mph in less than five seconds. The big power weaponizes this crossover; few of its competitors have an adequate answer to the fast and nimble JCW. Not even the related BMW X1 offers anything that can compete.

The SE hybridizes the base turbo-3 in order to offer 17 miles or so of electric driving range. Plug it in and you’ll need about 2.5 hours to recharge the 10-kwh battery.

Not everyone can live daily with the diminutive Mini Cooper, so the Countryman bridges the best of that iconic little car with the practicality of a small crossover. The Countryman is perfect for daily driving, full of aesthetic character, and even retains some of the trademark backroad fun that has become key to the Mini mystique. We’d get ours as an S in Signature trim.