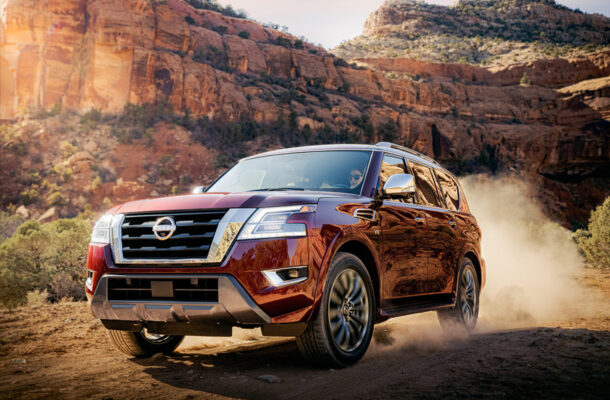 The Nissan Armada is an eight-passenger SUV whose name reflects its size and purpose. It’s refreshed for 2021, with more power, a revised front end, LED headlights and taillights, a new infotainment system with a larger screen, wireless smartphone charging, and additional safety equipment. It also gets (on all but base SV model) a trailer brake controller and trailer sway control, since it can tow more than four tons. And it loses one model, the top Platinum Reserve.

The three-row Armada is a less expensive version of the Infiniti QX80, but it feels just as luxurious in the cabin, thanks to high-quality materials and finishes.

The Armada is powered by a 5.6-liter V-8 that now makes 400 hp and 413 pound-feet of torque, mated to a responsive 7-speed automatic transmission. That’s an increase of 10 hp and 19 lb-ft of torque. The available four-wheel-drive system has a two-speed transfer case.

Its old-school body-on-frame structure, same as used by the Titan pickup truck, doesn’t give it crossover-like handling, but the Armada still offers a smooth ride on its independent suspension.

Made in Japan, Nissan offers the Armada in SV, SL, and Platinum models. Rear-wheel drive is standard and four-wheel drive costs $3,000 more.

The profile is clean, adorned only by gills behind the front fenders, with body-colored fender flares. The angle of the rear window mimics the rake of the windshield. New LED taillights play off the look of the headlights. Overall, the Armada’s rugged look reflects its capability.

In the cabin, luxury replaces rugged. It’s the highest-quality cabin in the Nissan lineup, with a quiet ambience that’s calming. The curved, two-pod dash has an Infiniti feel, with low-sheen, soft-touch surfaces, and veneer that does a good job of simulating wood. The Platinum takes a further step with quilted leather upholstery.

A new center stack supports a 12.3-inch touchscreen on top. The instrument cluster adds a 7.0-inch digital display between the gauges.There is plenty of storage space for small items, including a wireless charging shelf in the center stack that is redesigned around the updated infotainment system, which is a vast improvement over the old. It has touch controls, a rotary dial, and quick responses.

That rotary dial has been moved from the dash to the center console where it is easier to use. Because the touchscreen doesn’t have a “Home” icon, the rotary dial must be used to reach many menus.

The front seats are wide and soft. The standard second-row bench is wide enough for three, with a generous 41 inches of leg room. Captain’s chairs are optional.

The third row works for kids, and maybe on short trips for adults, but it lacks leg room, head room, and thigh support.

The Armada’s big 5.6-liter V-8 makes 400 hp and 413 lb-ft of torque. It’s a smooth, strong engine with a hearty growl, and effortless gets this beast weighing nearly three tons rolling. It can tow 8,500 pounds. The 7-speed automatic transmission has fewer gears than most rivals, but there is a plus to that; the more gears a transmission has, the more complicated its electronic programming, and the more chances there are for its sensors to get confused and be hesitant.

The Armada’s sheer size, and its ladder frame, limit its agility and cause it to lean a lot in corners. But the steering does a good job, and strikes a good balance of direct response without upsetting the body’s balance.

The Armada rides high and softly. Few vehicles feel as isolated from the road as the Armada with the standard 18-inch wheels, but the available 22-inch wheels send more road imperfections into the cabin.

For more than $50,000, the 2021 Nissan Armada SUV has a smooth old-school V-8 with a responsive 7-speed automatic. It offers a calm ride and bulky handling on an old-school chassis, a luxurious cabin, a third row for kids, and 15 mpg.