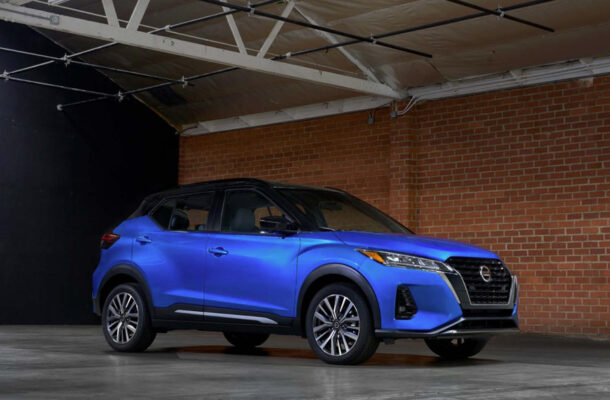 The Nissan Kicks is a five-seat compact hatchback with crossover styling cues.

For 2021 it gets touched up with a bigger and bolder grille and available LED headlights. Also for 2021, rear disc brakes replace drums on all but the base S model.

It’s powered by a 1.6-liter inline-4 engine making 122 hp, and it’s punchy off the line, delivering its power to the front wheels through a continuously variable transmission (CVT).

The Kicks is a city-friendly vehicle, but its cabin is narrow, and so are its front seats. Cargo space fares better, and the Kicks can squeeze in five passengers, but four will be more comfortable.

The IIHS gives it its top “Good” rating in all six of its crash tests. The NHTSA gives it four stars overall. The standard safety equipment runs uncommonly deep for an entry-level car, including automatic emergency braking with pedestrian detection, lane-departure warnings, blind-spot monitors with rear cross-traffic alerts, and automatic high beams. A surround-view camera system is available, as well as adaptive cruise control.

The 2021 Kicks is well-equipped with a 7.0-inch touchscreen with smartphone compatibility, and three USB ports. Options range from heated synthetic leather front seats to a larger touchscreen.

Made in Mexico, the Kicks come in S, SV and SR models.

The base S model costs $20,595 including destination, and comes with a 7.0-inch touchscreen with Apple CarPlay and Android Auto compatibility, three USB ports, and 16-inch steel wheels with rear drum brakes.

The SR costs about $24,000, and adds a surround-view camera system and LED fog lights. Options for the SR include heated front seats and a Bose sound system.

The successor to the quirky Juke is cute in a conforming kind of way. It’s bolder in the front and back, with fake air intakes squeezing the bottom of the new grille that’s V-shaped and double-breasted. New LED taillights don’t forget the Juke, they channel it.

There’s tasteful black cladding over the round wheel arches and along the door rockers. The S rolls on 16-inch steel wheels, while 17-inch alloy wheels are standard on SV and SR trims.

The S feels every bit the entry-level budget car it is, but it can be ignored, as the SV brings a touch of modernity for very little more money. The cabin’s dark themes get offset by silver door panels and optional three-tone seats. There’s a new and welcome armrest console to stow wallets and phones.

A digital instrument cluster takes up about two-thirds of the instrument panel. On the right is an analog speedometer, while the left side can be a tachometer with driver assistance systems, or audio, or trip meters.

An available wireless charging area opens a convenient recess where the center stack meets the console. Clever cup holders can store a big quart-sized water bottle or can be adjusted to snuggle an 8-ounce coffee.

The front seats are narrow and have short bottoms, so wide and/or tall drivers might feel forgotten, however the seats are well padded. Adjustment is manual, period; power seats aren’t an option.

The rear seats sit high and upright, and their cushioning is stiff. Leg room measures 33.2 inches.

Cargo volume is 25.3 cubic feet behind the second row, which expands to 32.3 cubic feet with the 60/40-split rear seats folded.

Outward vision is good but the sides can be limited. Wind noise in the cabin is pronounced at higher speeds.

The 1.6-liter inline-4 makes 122 hp and 114 lb-ft of torque, and with the car’s light weight of about 2,600 pounds, the Kicks holds its own from a standstill. It gets strained in highway merging, uphill passes, and when carrying extra passengers.

With MacPherson struts in front and a torsion beam rear axle, the Kicks rides comfortably enough, but the steering doesn’t deliver much feedback. The body leans into corners more like an SUV.

The 2021 Nissan Kicks offers interesting styling and good fuel economy at a low price. It skips all-wheel drive for commuter-car conveniences that matter, like smartphone connectivity. With better seats and more power, it would be a more convincing runabout. Keep the cost low if you buy—take the Kicks SV.