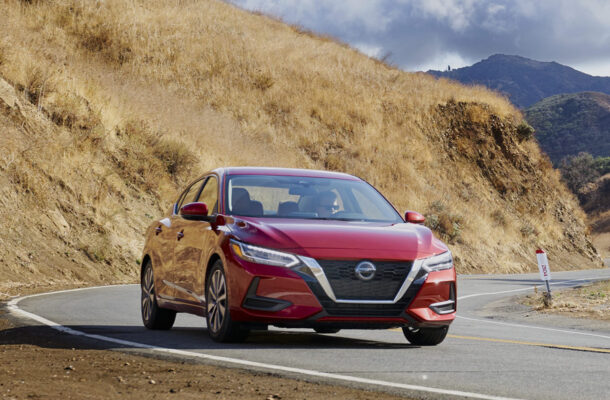 The 2021 Nissan Sentra is a handsome compact sedan with an upscale look and new refinement thanks to a redesign last year, marking the beginning of its eighth generation. It’s long on value, with many standard features. For 2021 it adds more, with standard Apple CarPlay and Android Auto compatibility.

It comes with a 2.0-liter inline-4 making 149 horsepower, mated to a continuously variable transmission (CVT) that drives the front wheels (all-wheel drive is not available). Its acceleration is good enough for easy highway passing. But more praise goes to the independent suspension that delivers a soft ride, and the responsive electric power steering that handles corners with little effort.

The Sentra’s front seats are swell, and two tall people can find comfort in the back, while the trunk is as big as some mid-size cars.

The IIHS says the Sentra is “Good” in all crash tests, but calls the standard headlights “Poor.” The NHTSA gives it five stars overall, but only three stars for front-passenger protection.

Automatic emergency braking is standard, as well as automatic high beams and blind-spot monitors. Adaptive cruise control and a surround-view camera system are available on some models.

The Sentra SR for $22,675 gets 18-inch wheels, a rear spoiler, LED headlights, and black synthetic leather with orange stitching.

The sleek shape is much like the bigger Altima and Maxima sedans. Its pleasing proportions and black-pillared roof, which give it a floating effect, separate the Sentra from your average economy car.

The Sentra is further graced with a low hood and slim LED headlights that point toward the rear, where the sedan adds more interest, as the floating roof appears to tilt downward as it travels to the rear deck.

The cabin exceeds the economy-car norm, with good fit and finish and an efficient layout. Even in black, the Sentra looks more awake than somber, thanks to the low horizontal groups of vents and controls that draw the dash down, and lay out an expansive view of the road ahead.

The base S seats are cloth, while the SV seats are a nicer cloth, both with six-way manual adjustment. They fit well for a wide range of sizes, with good side and leg support.

Quilted or synthetic leather is available, along with power and lumbar adjustment and heating, in the Premium package. On the SR, the package is a knockout, with lack-and-tan quilted leather trimmed with soft surfaces.

The Sentra’s trunk is fairly deep and wide, with 14.3 cubic feet of space, although that’s not quite as much as the smaller Versa sedan’s impressive 15 cubic feet.

The cabin is relatively quiet, with engine noise only present when pushed. Outward vision is great, though the lowered roofline pinches rear and side visibility.

The Sentra’s 149-horsepower 2.0-liter inline-4 engine doesn’t do much to make it quick, not even with 146 pound-feet of torque and a relatively light curb weight. But it’s fast enough. The power is decent at highway speeds, so passing is certain.

The issue is the continuously variable automatic transmission (CVT), which lags as it gathers up its pulleys and belts to provide the right transmission ratio.

The ride is settled and sure. The Sentra is made for comfort, not cornering, but its low center of gravity, responsive electric power steering, and independent rear suspension provide fluid dynamic responses to the road.

The electric power steering has good heft. At cruising speeds it’s soft and easy, and it builds effort when asked to be sporty, although it’s not totally free of the scrub from front-wheel drive if it’s pushed too hard. But who would do that?

With stylish looks, an efficient cabin, acceptable power, and sweet ride and handling, the 2021 Nissan Sentra sedan offers a lot for an affordable compact car. Pick a Sentra SV for the best value.