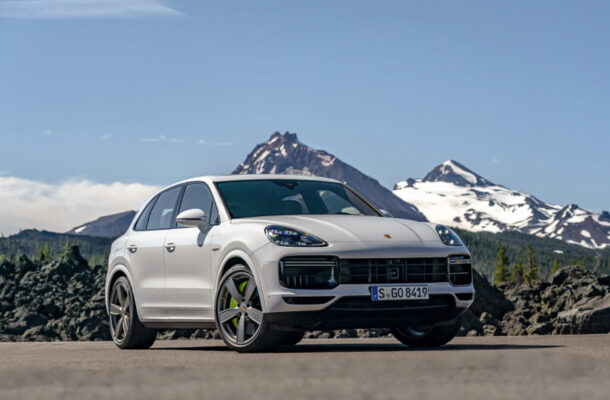 The 2021 Porsche Cayenne is a five-seat mid-size crossover SUV with good to exceptional performance and lots of luxury and high-tech features on its options sheet.

For 2021, there’s a new Cayenne GTS with a twin-turbo 4.0-liter V-8. Also, the two existing plug-in hybrid models get larger lithium-ion batteries with a usable capacity of 14.3 kwh, up from 11.3 kwh.

The Cayenne is a natural athlete on pavement and can defy physics on the track, using its long list of performance hardware.

Made in Germany, the Cayenne comes in base, S, GTS, Turbo, E-Hybrid, and Turbo S E-Hybrid models, all in standard SUV and so-called “Coupe” body styles.

The base Cayenne starts at $68,850 for the standard SUV and $77,850 for the Coupe. It comes with partial leather upholstery, 8-way power seats, a 12.3-inch touchscreen infotainment system with wireless Apple CarPlay compatibility, navigation, 10-speaker sound system, LED headlights, and 19-inch wheels.

The Coupe adds a panoramic sunroof, adaptive dampers, and 20-inch wheels, and the Sport Chrono package with additional drive modes, launch control, and a digital and analog dashboard clock.

There are many options, including a 21-speaker Burmester audio system, rear-axle steering, and all the interior trim choices you can imagine.

The Cayenne’s looks haven’t changed much in almost two decades, but it still manages to be contemporary, with a nose and rounded front fenders inspired by the Porsche 911 sports car—a car that has set some kind of world’s record for so slowly changing its shape over decades. The Cayenne’s full-width taillights remain unique, at least to Porsche.

The cabin has grown more modern and minimalistic over the years. A large attractive 12.3-touchscreen handles many of the functions that used to be done by knobs and switches. An analog tachometer in the middle of the instrument panel is flanked by a pair of 7.0-inch digital screens that provide a ton of information.

The Cayenne’s 12.3-inch touchscreen is mostly but not perfectly intuitive, as some controls are buried and some functions could be easier to use. The voice recognition system works well. Apple CarPlay is standard but Android Auto isn’t available.

The sporty front seats come standard in leather, with eight-way power adjustment, and they offer good support during hard cornering. They get better with available 18-way adjustment, plus heating, cooling and massaging.

Being mid-size, the standard Cayenne can carry five in comfort, with enough width for three in back. The Coupe only has seating for four, but there’s good leg room thanks to the 113.9-inch wheelbase. The rear seat slides forward and back, reclines, and is available with heating.

The Cayenne has a useful 27.5 cubic feet behind the rear seats, which can fold in a 40/20/40 split to increase storage to 60.3 cubic feet. The Coupe has less, 54.3 cubic feet. And the E-Hybrid models lose a few more cubic feet to their batteries.

The Cayenne uses five engines in its six models—make that six, since one of those engines comes with two power outputs. The base engine is a turbocharged 3.0-liter V-6 making 335 hp, capable of 0-60 mph acceleration in 5.6 seconds with the Sport Chrono package or 5.9 seconds without it.

The E-Hybrid uses the base single-turbo V-6 and an electric motor to make 455 hp. It can vault from 0-60 mph in 4.7 seconds, and it delivers immediate low-end grunt and smooth transitions from gas to electric power.

The steering is heavy, sharp and communicative. The stock Cayenne barely leans in the corners at all, but the active anti-roll bars keep it supernaturally flat. Fat tires provide amazing grip to get the Cayenne moving and hug corners, while the rear-axle steering makes the big crossover feel small in tight corners.

With 9.6 inches of ground clearance from its air suspension, the Cayenne can run off-road with a Range Rover. It can cross a river that’s 20 inches deep, or climb a 55-degree hill. Just take off those fat tires first.

If you want the ultimate SUV, look no farther. The 2021 Porsche Cayenne has such an abundance of dynamic offerings, it’s sensory overload. The question every driver has to answer: How fast do I want to go? We’d choose one of the roaring twin-turbo V-8s and work our way up in price from there.