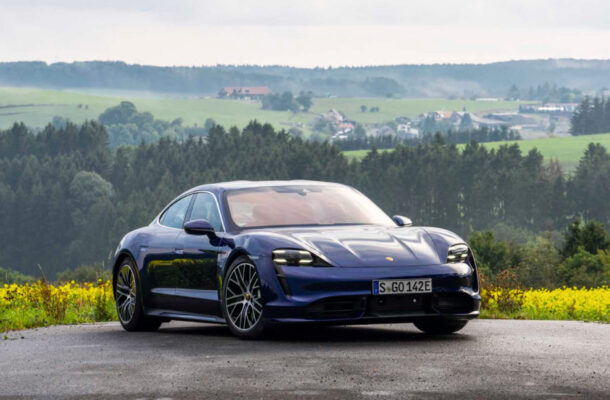 The Porsche Taycan is an all-electric four-door sedan, obviously quite a departure for Porsche. It’s one of the quickest cars in the world, with a 0-60 mph time of 2.6 seconds for its most energetic model.

The Taycan is about the same size as a BMW 5-Series or Mercedes E-Class, but has less room in the cabin. It’s either a four-seater or a 2+2, depending on expectations, but either way it’s far more plush than most performance cars.

The Taycan was introduced last year. For 2021 adds something called Function on Demand, that function being able to add electronic features over the air. The Taycan also now has Plug & Charge capability, which, when the network is established across the country, allows automatic billing at charging stations.

Also new for 2021, the Taycan’s cruise control adapts to speed limits, as well as road conditions and situations ahead that might warrant a yield or stop.
And later in 2021, a smaller battery (79.2 kwh) will become standard.

For now, the Taycan uses a 93.4-kwh lithium-ion battery powering two electric motors, one in the front for the front wheels, and the other in the rear for the rear wheels. There’s also a 2-speed transmission at the rear.

The Taycan is built on a completely new 800-volt system, a first for electric cars. It allows faster charging plus more flexibility for charging, as well as downsized wiring harnesses and componentry.

The Taycan doesn’t hide its weight of 5,100 pounds, but it flaunts the physics with wonderful coordination of the electric motors, adaptive air suspension, and chassis systems.

The Taycan offers a lot of charging options. An 800-volt-compatible CCS fast charger (offered by Electrify America along major interstate highways) can charge at up to 270 kw and up 80 percent in about 20 minutes. There’s also an optional 400V/150-kw onboard auxiliary charger, which charges faster on a wider range of CCS hardware that might not be 800V-compatible. On your basic Level 2 home chargers, it takes 9 hours for the Taycan to fill an empty battery with juice.

The Taycan hasn’t been crash-tested in the U.S. and most likely won’t be, because of its cost. Standard safety equipment includes automatic emergency braking, active lane control, and parking sensors. Options include adaptive cruise control, driver-assist sensors, night-vision cameras, and a surround-view camera system.

One of the models we tested with options had a sticker price of more than $202,000, and it wasn’t fully loaded; we imagined a few more options and got that price to $230,000.

The Taycan stunningly combines classic Porsche shapes with suggestions of other Porsche models, namely the nostalgic curves of the 911, in its hood and stance. The Taycan’s rear end looks lean and abbreviated like the Cayman, and from the three-quarter profile it suggests the larger Panamera.

There’s a typical modern Porsche lighting signature, with LED headlights, adding “fangs” that curve around the front bumper to form a small and aerodynamic nose. A scallop on the sides runs from the front doors to the rear wheels. The rear is clean and horizontal, uncluttered by exhaust ports. The black rear diffuser stands out with lighter body colors.

The cabin is attractive. It comes in some extroverted colors, but mostly it’s more subdued, and even harks back to vintage 911 cockpit simplicity, never mind the vast number of square inches of visual display in the five available screens—three for the driver, one for the rear passengers, and one for the front passenger who can play DJ.

The quality of materials might not match a Rolls-Royce or Bentley, but it’s all here, with the best leather, open-pore wood, and smooth seams.

The front seats are 14-way power buckets, low but comfortable, snug but wide, with plenty of shoulder room. The optional Sport seats are firmer, with 18-way adjustment including thigh, hip and back bolsters that can accommodate big bodies.

Four adults will fit inside, but the two in the back will have to be flexible to get in, and they won’t have much leg room when they get there. Give the Taycan some slack by considering it a 2+2, and you’ll feel better.

There’s about 12 cubic feet of rear trunk space, while the 2.8-cubic-foot front trunk has enough room for a couple of day packs. The mobile charge connector is stored there.

Needless to say the cabin is quiet, while rearview vision is limited thanks to the steep slope of the roof and the narrow rear window.

Performance-wise, the Taycan is the measuring stick for electric cars, with that 0-60 time of 2.6 seconds for the Turbo S, while the Turbo is not far behind, in 3.0 seconds. If you have a need for speed, the Taycan is more rewarding to drive (and much more expensive) than the more practical Tesla Model S. The 750-hp Turbo S can also hit 100 mph in less than seven seconds, and reach a top speed of 162 mph.

But it’s that launch from a standing-start that’s truly brutal—breathtaking for some, terrifying for others. The Turbo S has an almost unbelievable 774 lb-ft of torque available at launch.

With its 162-mph top speed, the Turbo S comes with carbon ceramic brakes, while the Turbo uses tungsten-carbide stoppers.

All versions of the Taycan use a unique 2-speed transmission at the rear wheels.

We’ve driven the three versions of the Taycan many hundreds of miles. We’d drive them many thousands more if we could, and not just to hammer the throttle. At a cruising pace, the Taycan is a comfortable and well-balanced car with a lot of nuance and finesse. It feels its weight, but the independent suspension—twin wishbone in front and multi-link in rear—never flinches.

In corners, the wide tires stay planted. The optional chassis control system might add to the cornering potential, but it isn’t needed to devour winding roads.

The 2021 Porsche Taycan is the ultimate electric car, for those who can afford it. It ditches practicality for outrageous speed, and promises exceptionally quick charging, too.