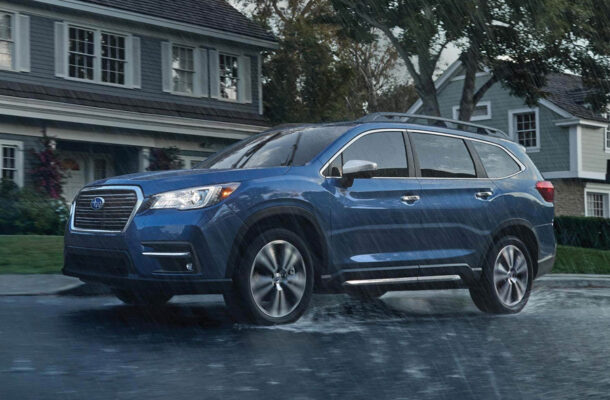 The 2021 Subaru Ascent is a popularly-priced family hauler, one that hopes to keep in the fold Subaru enthusiasts whose families and lifestyles have outgrown their Foresters and Outbacks.

The 2021 Ascent now gets adaptive cruise control and new adaptive headlights as standard but otherwise remains unchanged. In proper Subaru fashion, it continues to offer standard all-wheel drive and a 2.4-liter flat-4.

About that engine: atop its horizontally-opposed cylinders sits a turbocharger that boosts output to 260 horsepower and 277 lb-ft of torque. A CVT is the only transmission. The combo isn’t exactly fast, but returns an EPA-rated 21 mpg city, 27 highway, 23 combined. That’s better than many V-6-powered competitors with similar power.

Safety scores have been excellent, with the Ascent earning the NHTSA’s five-star overall crash-test rating.

At the bottom is the $33,345 base model. It comes with plenty of standard features, including the safety gear, 18-inch wheels, cloth upholstery, tri-zone climate control, and a 6.5-inch infotainment touchscreen with Apple CarPlay, Android Auto, and Bluetooth compatibility.

For $40,645, the Limited piles on luxuries such as leather upholstery, 20-inch alloy wheels, heated front and second-row seats, a power liftgate, keyless entry, and a 10-way power driver’s seat with memory function.

From a design standpoint, Subaru has become one of the most conservative automakers on the market. The Ascent refrains from breaking new stylistic ground in favor of a familiar look. The body is chunky but not too much so; the lines are rounded but not overtly; the front end leans more Outback and the rear votes Forester.

Luxury isn’t the Ascent’s play, practicality is. Even the optional leather upholstery is durable enough to handle your dog.

Base models get a 6.5-inch touchscreen, but the rest of the lineup gets an 8.0-inch unit. Big icons and a responsive software make this an easy system to use on the go, which is especially nice considering Subaru exiled all physical radio knobs from the cabin. It comes standard with those two critical connectivity features, Apple CarPlay and Android Auto. Navigation is also offered, but is only standard on the Touring trim.

The three rows of seats are what will move this Ascent off dealer lots. Passengers furthest back will get fairly spacious digs relative to other third rows in the segment.

The second row gets up to 39 inches of leg room when the adjustable bench seat is put in its rearmost position. The standard bench can also be swapped out for captain’s chairs. Both seating arrangements fold flat or fall forward easily for access to the third row or for more cargo space.

Speaking of, cargo space is highly competitive. Behind the rearmost row is 17 cubic feet; behind the second row, 46 cubic feet. Some 86 total cubic feet of cargo area opens up when both rows are folded flat.

The Ascent will spend more time in the trail of cars waiting in the pick-up line than on the actual trail, but true to its name the Ascent will slog its way up to a trailhead with relatively little effort. Helping it get there is its 8.7 inches of ground clearance—about the same as an Outback or Forester—and a standard off-road mode.

The 2.4-liter flat-4 offers moderately engaging acceleration and fuel economy. Under hard throttle, the engine’s 260 hp and 277 lb-ft of torque will move the two-ton Ascent with surprising authority at local speeds. Credit for this goes to the turbo, which delivers max torque before 2,000 rpm.

At any speed, the Ascent handles potholes and other road scars without any issue. Body motions are controlled and impacts are snuffed out as they occur. The passenger compartment is kept serene over all but the worst roadways, especially with the smaller 18-inch wheels.

The 2021 Subaru Ascent takes the best of the brand’s smaller offerings, and upsizes it into a package fit for big families. It’s quick enough, has lots of spread-out room, and the surefooted feel of standard all-wheel drive. We’d look specifically at the Premium trim, where the value play is strongest.