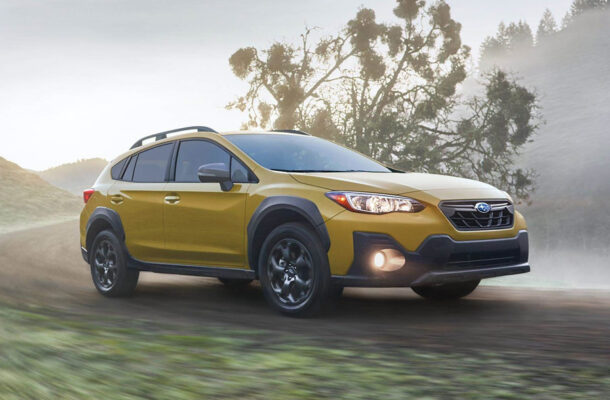 Nearly eight years after it was introduced, the Subaru Crosstrek remains a darling among consumers who want to flaunt their active lifestyles both around town and at the trailhead parking lot.

The big news for 2021 is the new Sport trim. More than just a name, the Sport backs up such connotations with a new 2.5-liter flat-4 shared with the Outback and Forester.

The 2.5-liter’s 182 horsepower isn’t that powerful in those larger models, but the smaller Crosstrek stretches that meager power further. Don’t plan on going racing, though: the Sport (and the Limited, which also gets this engine) still needs 8.2 seconds to hit 60 mph. But at least it’s a better showing than the nearly 10-second run required by the base engine.

That base engine remains the same as ever: a 152-horsepower 2.0-liter flat-4. It gets matched up to either a 6-speed manual or a CVT, the latter costing $1,350. As with every Subaru, full-time all-wheel drive is standard and comes with dedicated off-road modes.

As for gas mileage, the Crosstrek makes good use out of a gallon of gas. The base engine returns 28 mpg city, 33 highway, 30 combined with the more popular CVT. The uprated 2.5-liter engine is nearly as efficient at 27/34/29 mpg.

If those numbers don’t impress you, rest easy: a plug-in hybrid model is forthcoming. It pairs the base 2.0-liter engine with a pair of electric motors and a 8.8 kwh lithium-ion battery pack. The resulting 17 miles of all-electric range and a 90 MPGe combined make this the most efficient option here.

Safety equipment isn’t lacking on the Crosstrek, at least on models equipped with the CVT. Such models get a comprehensive list of standard safety features such as automatic emergency braking, active lane control, adaptive cruise control, and a rear-seat reminder. The features, which are bundled together under the EyeSight moniker, aren’t offered with the 6-speed manual due to the do-it-yourself nature of such a gearbox.

All Crosstreks, however, rate well for crashworthiness. The NHTSA awarded it a five-star overall rating despite just a four-star rating for rollover prowess. With the top-spec headlights found on the Limited, the IIHS called the Crosstrek a Top Safety Pick Plus. Other models without those headlights were downgraded to Top Safety Pick status.

The new Sport slots in at $27,545. Its biggest draw is the more powerful engine, but it also gets uniquely-styled wheels, synthetic upholstery with contrast stitching, additional drive modes, and carbon fiber trim bits.

The $29,045 Limited is the flagship trim. Along with the 2.5-liter engine, it gets leather upholstery, 18-inch wheels, an 8.0-inch touchscreen, and uprated headlights.

The Hybrid starts at $36,195 before an available $4,500 tax credit. Expect it to be equipped similarly to the Limited. Only select states will be offering the Hybrid once it is released late in the 2021 model year.

The Crosstrek is a mix of pluck and purpose. The ride height and cladding provide the appropriate trail-ready vibes, but the general shape makes no bones about the Crosstrek’s hatchback roots. And that’s the ultimate takeaway here: the Crosstrek, like most Subarus, simply is what it is, with no pretense or posturing.

But it’s that very modesty, coupled with its genuine ability to scrabble over trail, that makes the Crosstrek respected. It doesn’t need to resort to painful look-at-me styling or other design gimmicks to sell itself. Some funky wheel designs, a pleasing shape, and a reasonable amount of cladding are all that’s needed to keep the Crosstrek hanging with the cool kids.

The Crosstrek’s cabin is friendly, comfortable, and livable. A few hours behind the wheel is enough to get the lay of the land here. Despite the low price, the quality of the switchgear is decent and fit and finish is likewise.

Most Crosstreks will get a 6.5-inch touchscreen in the dashboard. It isn’t as visually impressive as the bigger screens found standard in some of the competition, but the smaller size doesn’t hurt usability. The native software is user-friendly and responsive, and the big icons are easy to see and tap while driving. A single USB port allows for wired Apple CarPlay and Android Auto.

A bigger 8.0-inch screen is also on offer with most trims and standard on the Limited. It gets navigation and a few other goodies, but the base screen is honestly good enough at what it does that upgrading isn’t necessary.

The Crosstrek can seat up to five, but the front two seats are the best in the house. Subaru’s durable upholstery feels like it will hold up for the long haul, and it stretches over seats that are firm, supportive, and all-day comfortable. They make road tripping an easy task.

Some 23 cubic feet of cargo space lives behind the rear seat, but folding down the seatbacks opens up 50 cubic feet of total space.

Let’s be clear: the Crosstrek isn’t a sports car, if you couldn’t tell by the horsepower numbers. But why does it need to be? The Crosstrek’s idea of fun involves dirt roads, rutted two-tracks, and maybe even a few shallow mud pits. In such environs it excels, thanks to a sense of surefootedness and stability that seem to be ever-present.

A lot of that ability comes down to its standard full-time all-wheel drive, which is always supplying some level of grip to both axles. Multiple drive modes can further tailor the Crosstrek to specific conditions, such as mud and sand or snow and ice. Many competing small crossovers lack this hardware and instead must make do with a more simple all-wheel-drive setup. If they have all-wheel drive at all, that is.

Under the hood of most models will be a 2.0-liter flat-4. This boxer engine is much in the vein of every Subaru engine up to this point: acceptably efficient, mild-mannered, and slow. A bit of character shines through via the exhaust note, which burbles with that peculiar brat-brat-brat so endemic to boxer-designed engines, but otherwise it does little to endear itself to the driver. The Crosstrek manages 0-60 mph in under ten seconds, but not by much.

Buyers of this engine get a choice of transmission. The base 6-speed manual will be a rare choice, with the CVT more common.

The new 2.5-liter wakes things up in every way, but interstate travel is where the extra power is truly noticeable. Passing other traffic, getting up on-ramps, skirting over grades and hills; the bigger engine does it all with a sense of authority that is lacking with the smaller engine.

Around town, the Crosstrek is easy and effortless to drive with either engine. The steering is numb but not very heavy, making tight parking maneuvers easy, and the suspension soaks up bumps without jolting occupants.

The 2021 Subaru Crosstrek has proven powertrains, tactile quality, and is an excellent value. It makes the Crosstrek an easy choice for consumers. If we were shopping, our choice would be the new Sport trim for its larger engine.