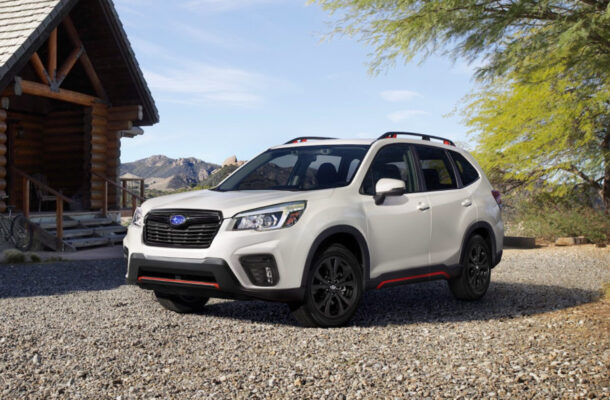 The Subaru Forester has become a favorite among consumers who trawl the suburbs during the work week but venture into the country on the weekend.

For 2021, the Forester now gets standard LED automatic headlights. Otherwise it doesn’t see any notable changes.

The only powertrain on offer is a standard 2.5-liter flat-4 that makes 182 horsepower, which gets routed via a continuously variable automatic transmission to all four wheels. This setup returns EPA ratings of 26 mpg city, 33 highway, 29 combined.

The IIHS named the Forester one of their Top Safety Pick+ models, while the NHTSA gave it a five-star overall rating.

All prices include a $1,050 destination charge.

The bottom-trim Forester starts at $25,845. It comes with 17-inch wheels, cloth upholstery, a 6.5-inch touchscreen with Apple CarPlay and Android Auto, and the aforementioned active safety features.

Moving into the $30,445 Sport brings along exclusive orange accents inside and out, 18-inch wheels, blind-spot monitors, hill-descent control, and a special X-Mode setting that tweaks throttle and steering efforts for trail conditions.

From there, the $34,345 Limited gets leather upholstery, dual-zone climate control, and a power liftgate.

The priciest model is the Touring, which starts at $35,945. It comes with exclusive saddle-brown leather, navigation, a driver-distraction mitigation system, heated rear seats, and a power front passenger seat.

The Forester, which sits 8.7 inches off the ground, looks like function came before form. Big and airy windows and a tall roof that refuses to taper lend it its pragmatic feel.

The front and rear ends don’t spice things up much, either. Not that we mind: compared to some competition out there, the Forester’s reserved detailing is a bit refreshing. We like that the headlights refrain from looking angry and that taillights don’t feel a need to stretch across the entire rear end.

With a $25,000 starting price, the Forester is clearly intended as a car for the people, so don’t be surprised by the hard, durable materials that abound throughout the cabin. Pseudo-luxury is eschewed for honest usability—appropriate in a car whose fan base prefers beer and bonfires over cocktails and clubbing.

One of the big tell-tale signs of the Forester’s price point is its teeny 6.5-inch touchscreen. It includes the all-important Apple CarPlay and Android Auto, but it clearly looks and feels a generation behind what similarly-priced competitors are now offering as standard equipment. Pricier trims do come with an 8.0-inch touchscreen, however, which feels much more in line with today’s expectations of in-car technology.

The Forester can carry five people in comfort thanks to a wide, comfortable back seat. It doesn’t slide fore and aft like some of the competition, but its 40 inches of available leg room should be plenty for most anyone.

Behind the rear seat is 35 cubic feet of cargo space, making the Forester one of the more capacious options in this segment. Drop the seatbacks and 75 cubic feet becomes available.

The CVT has been improved and refined to the point that it no longer feels remarkably different from a traditional automatic. Sure, there’s the occasional whine when it leaps up into the rev range and stays there, but that’s only if you put your foot in it.

All Subarus come with full-time all-wheel drive, which is somewhat unique—most rivals use part-time systems that send power rearward only when traction is determined to be limited. The Subaru, with power going to all four wheels all the time, feels a bit more sure-footed than those competitors even in dry conditions. It likely costs a bit of gas mileage, however, which might partly explain why the Forester’s EPA-rated gas mileage is just about midpack in its class. It does beat what might be its closest competitor, the Jeep Cherokee, by a couple mpg in both city and highway driving.

Foresters also have something called X-Mode, intended for light off-roading. Toggle this setting and the crossover braces itself for trails by altering transmission performance and throttle response. Pair it with the 8.7 inches of ground clearance and available hill-descent control and the Forester will amble leisurely through some surprisingly rough terrain.

On the road, the Forester is as comfortable and livable as anything else. It absorbs bumps well, hushes road noise, and handles with competence, if not precision.

The 2021 Subaru Forester is first and foremost a practical wagon. Its reputation for honest, unadorned all-weather traction has been upgraded somewhat with touchscreens and safety technology, but it’s still durable and unperturbed by snow or other inclement weather. We’d choose the Forester Premium for maximum value.

—by Sam Moses, with driving impressions from The Car Connection