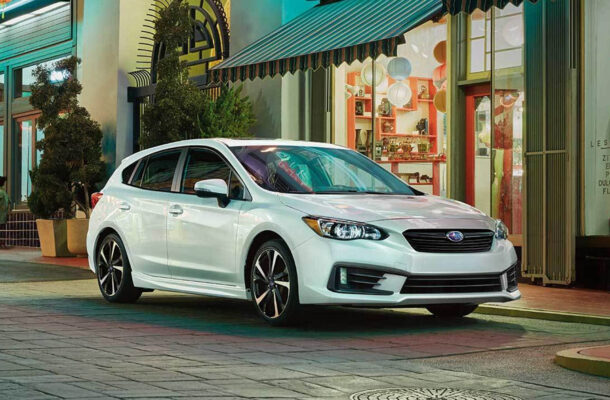 The 2021 Subaru Impreza is an unassuming compact offered as both a sedan and hatchback. It leaves performance to the WRX and mud-slinging to the Crosstrek, settling instead for a pleasing middle ground. Whatever it lacks in street cred is made up in affordable practicality.

Other than the Premium trim now getting an array of drive modes as standard, little changes for the Impreza. It continues to be offered as both a sedan and hatchback with a single engine offered between them.

Specifically, that engine is a 2.0-liter flat-4 making 152 hp and 145 lb-ft of torque. Like every Subaru, All-wheel drive is standard. Buyers can choose from a CVT or a 5-speed manual transmission. Manuals are rare enough these days; one with just five speeds is even more of a unicorn.

The CVT is the more miserly of the two transmissions. So equipped, an Impreza sedan returns 28 mpg city, 36 highway, 32 combined. Opting for the hatchback means 28/36/31 mpg. Sport-trimmed variants return about 1 mpg less across all three drive cycles.

The Impreza is well equipped with standard active-safety features—provided you buy the CVT, in which case automatic emergency braking, active lane control, and adaptive cruise control are all standard. Manual-gearbox cars aren’t privy to any of that. Blind-spot monitors can be found on the options sheet.

The NHTSA gives the Impreza five stars in all its testing, and the IIHS calls CVT-equipped models a Top Safety Pick.

A base Impreza sedan with the 5-speed starts at $19,720 after destination charges. That money buys standard USB ports, power features, cloth upholstery, and a 6.5-inch touchscreen with Apple CarPlay and Android Auto compatibility. Add $1,300 for a CVT and $500 for a hatchback.

The Premium model begins at $23,120 for a sedan and $23,620 for a hatchback. They up the ante with heated front seats, additional sound deadening, satellite radio, and expanded infotainment capabilities such as satellite radio and wifi capability.

At the top is the Limited, which costs $26,820 for a sedan or $500 more for a hatch. It’s equipped with an 8.0-inch touchscreen and leather upholstery.

Though encroaching five years without any major facelifts, this generation of Impreza still earns our respect with a muted, low-key sort of style that is aging well. Sitting close to the ground but eschewing any racy traits, it’s unpretentious, but not to a fault. It manages to scale down the design motifs of the flagship Subarus, such as the headlights and grille, without diluting them.

Our preference runs towards the hatchback, which seems to better resolve any stylistic loose ends—it’s as if the car was designed first as a five-door before being mildly reshaped into a sedan. Either way, we find the Impreza an attractive little number for what it is.

You won’t be blown away by the cabin of the 2021 Impreza, but few five-year old designs have that sort of staying power in this segment. The hallmark touches are an upright center stack, a narrow and low-set console, and a traditional gauge pod. It isn’t trendy, but it’s highly functional and made of quality materials.

Only the pricey Limited gets an 8.0-inch display. The rest of the lineup makes do with a 6.5-inch screen with Apple CarPlay and Android Auto. Despite being on the smaller side, we find it is simple, responsive, and generally works well. Sitting neatly as it does in the dash, we’re hard-pressed to pine for anything bigger.

We have no bones to pick about the seating. The driver’s seat is comfortable, and the manual adjustments found on most trims have enough range to find a good position. An excellent view of the road and firm, comfortable cushions suggest long drives won’t be an issue.

The back seat is even less lavish than the front. The three-across bench struggles to seat three, though it can make do if necessary. Leg and head room are more than adequate. We’re also fans of the low beltline, providing rear passengers with a nice view out and the driver with plenty of glass area to check their blind spots.

Like speed? Get a WRX. How about big clearance for those distant trailheads? The Crosstrek calls you. Care for neither? The Impreza will be perfect.

The Impreza offers little in the way of speed, making just 152 hp from its 2.0-liter flat-4 engine. That’s on par with the base engines of its competition, but others offer more powerful options—the Impreza doesn’t. Spend close to the $30,000 on a Limited-trim hatchback and you’re still getting 152 hp.

At the least that 152 hp is relatively refined. Hard throttle is when things are most crude. You’ll need hard throttle for passing, short on-ramps, and steep hills—but go easy on the accelerator and the Impreza happily trundles along.

The CVT is a generally decent dance partner, for the most part invisible in operation and quick to adjust its ratio. It feels most like a traditional automatic gearbox in Sport-trimmed models, where it’s tuned to mimic a 7-speed automatic. As for the manual? We’d skip it, as its five gears are too few in 2021, something underscored by its marginal EPA figures.

The standard all-wheel-drive system brings planted handling and all-weather confidence. Subaru’s SI-Drive family of drive modes further increases faith in the car by offering a set of driver-selectable modes that tweak the throttle, steering, and transmission shift mappings accordingly. In dry conditions the Impreza rides well, though Sport models and their 18-inch wheels are less compliant and prone to harsher impacts.

The 2021 Subaru Impreza has an almost puritan simplicity: just enough power, unadorned design, no fancy available gadgets or features. It’s a no-nonsense, practical car that boasts a low base price and standard all-wheel drive. For most buyers, that’s reason enough to keep the Impreza on their short list. Our recommendation? The Premium trim.