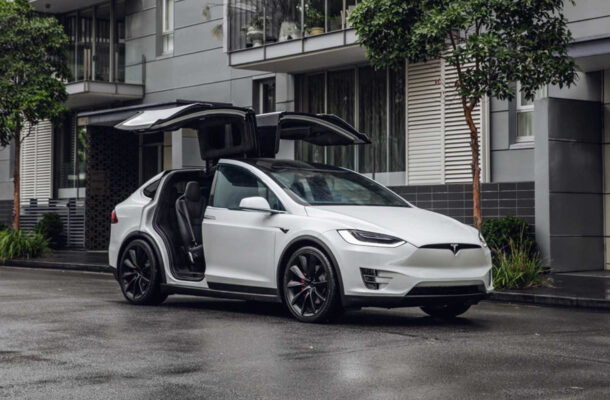 The 2021 Tesla Model X is an electric crossover SUV with three rows of seats. It’s the falcon-door companion to the long-running Model S hatchback.

For 2021, the range of the Long Range Plus model is increased from 328 to 371 miles, making it the best in its class. The Model X is also the quickest, as the Performance model can accelerate from 0-60 in an amazing 2.6 seconds.

The Model X is built on the platform of Model S fastback, with a taller body. It uses two motors, a 100-kwh battery pack, and is all-wheel drive. It’s great on slippery roads and in the snow, but it’s not designed for off-road. Despite its weight of about 5,500 pounds, it offers impressive handling, especially when you consider it can seat up to seven.

Despite its cost—from just over $80,000 to nearly $130,000—the Model X has some problematic quirks and design issues. The function of its flashy falcon-wing rear doors is awkward, its teardrop profile is bulbous, and the cabin space is less than it should be for a three-row SUV.

But you can’t fault its EPA-rated range of up to 371 miles in the The Model X Long Range; that equates to 105 MPGe. The faster Model X Performance is rated at 341 miles, or 300 miles with the optional 22-inch wheels.

The Tesla Model X hasn’t been crash-tested, and most likely won’t be because of its price. However it has a five-star rating in federal NCAP testing, in front, side, and rollover tests.
Standard safety equipment includes automatic emergency braking, a collision-warning system, and Autopilot, which gives the vehicle the means to steer, accelerate, and brake within the same lane. The standard Autopilot suite includes active lane control, adaptive cruise control, and blind-spot monitors.

So-called “Full Self-Driving Capability” is a $10,000 option and adds the ability to navigate on highways with automated lane-changes, use automated parking, and summon the vehicle in parking lots. Despite the name of this package, it’s not fully self-driving.

Made in California, the Tesla Model X Long Range Plus costs $81,190 including destination, while the Model X Performance starts at $101,190.

The Performance model, optioned with the most expensive six-seat interior, the $10,000 Full Self-Driving package, and wheel and paint upgrades, adds up to $127,190.

Access to the Supercharger network is another strong feature included with the Model X—with free unlimited Supercharging.

Something has been lost in translation from the sexy and rakish shape of the Model S, to the polarizing profile of the Model X. Maybe Tesla tried too hard to make the taller SUV aerodynamic, and presumably it is, but it just looks rotund. Concave sides, and bulbous arcs on the hood and roof, don’t do much to make it easy on the eyes.

On the plus side, flush door handles keep it clean, and the rear roofline looks better here than it does on many of the “crossover coupe” variants from Germany.

The cabin is austere while being technologically impressive, although the interior and interface hardware haven’t seen a significant redesign since its 2015 introduction. The instrument panel has very little switchgear, just a giant 17.0-inch vertical touchscreen that controls nearly everything. So it’s a good thing the system is clear, quick, and intuitive, with a near-flat menu structure. The voice-control functions are impressive, too. Tesla doesn’t offer Apple CarPlay or Android Auto, but it does offer nicely integrated ways to stream entertainment.

Overall, the cabin is comfortable and practical. It’s intelligently designed, with six cupholders, a big center console, and up to five USB ports.The front seats are comfortable for long distances, and the massive glass roof that extends into the windshield affords a panoramic view over a fairly high seating position.

Two rows of seats for five occupants is standard, but there are options for six or seven. We think the six-seat layout, with second-row captain’s chairs, makes the most sense, with easier access to the optional third row, which is about the same size as that of other SUVs.

There’s a reasonably big cargo area that expands to 88 cubic feet with the seats folded. There’s a frunk (front trunk) instead of an engine bay.

Finally, the falcon doors are cool but confounding. They need overhead clearance, and you have to give them a lot of room to open and close, which they do very slowly, 20 seconds to be precise.

The real-world Model X is Long Range Plus, which accelerates from 0-60 mph in 4.4 seconds. The Performance model? It takes just 2.6 seconds.

The Long Range uses essentially the same two motors in the Model S, with 259 hp each. In the Performance model the rear motor is enlarged to a 503-hp unit, and control systems are upgraded to make the most of it.

This big, heavy vehicle handles quite well, thanks partly to the low mounting of the massive 100-kwh battery pack. An air suspension is standard on the Model X, and it keeps the ride steady over choppy surfaces and twisty roads. The 20-inch wheels balance the quiet ride and good grip, while available 22-inch wheels reduce the range and diminish the ride quality.

The Model X can tow 5,000 pounds, but towing destroys the range, especially at highway speeds.

The 2021 Tesla Model X offers amazing performance, a comfortable cabin, smooth ride, intuitive infotainment, and the best range available. It may look ungainly, but its performance is without peer.