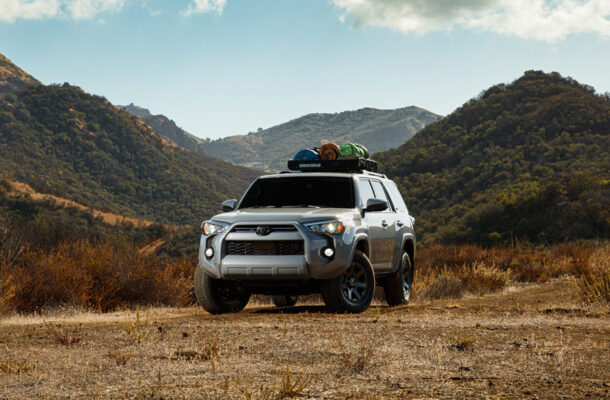 The Toyota 4Runner is a genuine truck-based SUV that offers four-wheel drive and all the other robust hardware required on challenging off-road trails. That and its throwback styling have kept it popular despite its advancing age.

New for 2021 is a Trail Special Edition. It doesn’t get any special hardware, just some unique trim inside and out that recalls the 4Runner’s aptitude for back-country adventure.

The 4Runner earns EPA ratings of 16 mpg city, 19 highway, 17 combined in all configurations.

Standard safety equipment includes automatic emergency braking, adaptive cruise control, and blind-spot monitors. The NHTSA gives the 4Runner a four-star overall rating and just three stars for rollover protection. The IIHS called it “Marginal” in more than one of its testing categories and deemed the headlights “Poor.”

The 4Runner is offered in numerous trims, the cheapest being the SR5. It starts at $37,015 and includes 17-inch wheels, a power rear liftgate, LED lights, cloth upholstery, an eight-way power driver’s seat, and an 8.0-inch touchscreen with Apple CarPlay and Android Auto.

The Premium is the next cheapest at $38,880. Features include an auto-dimming mirror, synthetic leather upholstery, keyless start, and heated power mirrors.

For $46,985 Limited goes for luxury with 20-inch wheels, chrome badging and leather upholstery.

The TRD Pro costs $51,645 and brings about all-terrain tires, an upgraded suspension with long-travel Fox shocks, skid plates, and a roof rack. Other features include red TRD badging and unique interior trim.

The 4Runner was never intended to be retro, but its boxy shape suggests 1990 more than it does 2021. The most modern aspect of the 4Runner is the front end, which sports a massive grille. It’s opposed by the old-school badge that spells out “TOYOTA” across the middle of the grille.

The 4Runner comes into its own in TRD Pro form. The Pro designation brings chunky off-road tires, a suspension lift, and a roof rack, which gives the SUV a distinctive trail-ready look. Toyota also offers a snorkel accessory for the truly adventurous. For those looking for the perfect canvas from which to build their overlanding rig, the 4Runner TRD Pro is hard to beat.

The cabin offers up a plain dashboard with a sea of buttons and switches—all of which combine for a sense of old-fashioned durability, like that of a 747 or a tube amp. You won’t feel bad clambering in with muddy boots and a dirty pooch in tow, as there’s no fancy leather or trim to ruin.

Despite its age, every 4Runner does get an 8.0-inch touchscreen with Apple CarPlay and Android Auto. Navigation isn’t offered even on the top trims, however, nor is a larger touchscreen on the menu.

The 4Runner is a big SUV on the outside but not so much on the inside, where the cabin can feel cramped. The driver and front passenger seats are well suited to bigger frames and long travel days, but in back, leg room is skimpy at 32.9 inches. An available third row is offered, but it’s jammed into the cargo area, almost an afterthought.

Toting cargo is a better ask of the 4Runner, as it has 47.2 cubic feet of space behind the second row and 89.7 total cubic feet.

Being a traditional SUV, the 4Runner might be a throwback experience for buyers who’ve grown up coddled by crossovers. Unlike the carlike ride and handling that distinguishes vehicles like the Toyota Highlander, this Toyota jostles passengers over most roads and leans deeply into corners.

The more trucklike tendencies don’t take away from the fairly soft ride, a benefit of the big tires and long-travel suspension. Steering is light, making the 4Runner easy to navigate around town, but on the highway drivers will find themselves making constant small corrections.

The 4.0-liter V-6 that powers every 4Runner has 271 hp, more than enough for the kind of off-road driving it promises. Off-road is, after all, where the 4Runner truly shines. Even basic models with four-wheel drive can run without asphalt in sight. TRD Off-Road models go a step further with a locking rear differential and a trail cruise control that lets the 4Runner amble along at a consistent pace without input from the driver. The TRD Pro is best for trail antics with its specialized Fox shocks and a lifted suspension.

An optional hydraulic suspension caters towards better handling on-road as well as off. It can cut down on body lean during cornering and force the wheels downward on the trail for enhanced grip on uneven terrain.

As a commuter or family vehicle, the 2021 Toyota 4Runner lacks the refinement and gas mileage to make much sense. But as a trail rig, it’s an excellent choice. The TRD Off-Road might be the best choice, as it isn’t too expensive nor too sparsely equipped.