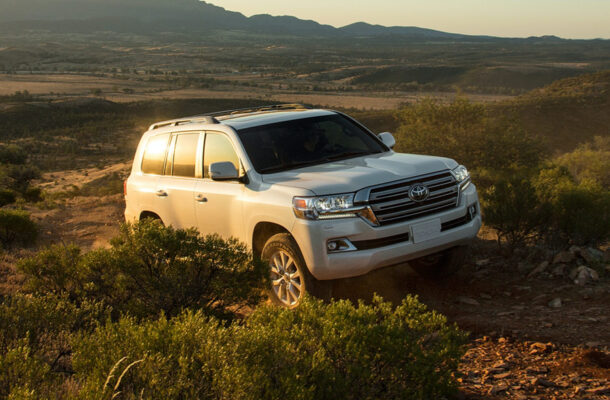 Most SUVs have gone soft in the past two decades, but not the 2021 Toyota Land Cruiser. This lumbering giant has remained unaffected by the slow march away from genuine capability, and it retains all the terrain-crossing might that first forged its reputation.

As usual, not much is new on the newest Land Cruiser. Nothing has changed besides the Heritage Edition now being available with a third row,

All Land Cruisers get a 5.7-liter V-8 that does the heavy lifting. It makes 381 horsepower and 401 lb-ft of torque. The power gets routed through an 8-speed automatic, which in turn can send power to all four wheels via the standard four-wheel-drive system.

Toyota makes it easy to buy a Land Cruiser. The plain-jane Land Cruiser is priced at $86,880 after destination and its only option is a $2,220 rear entertainment system. Standard features include leather upholstery, a 9.0-inch touchscreen with navigation, a sunroof, heated and cooled front seats, wireless smartphone charging, heated second-row seats, and a premium audio.

The Heritage Edition adds $2,330 to the bottom line and includes a unique grille, 18-inch gold BBS wheels, a roof rack, and special badging. The only option is the $1,430 third-row.

Toyota’s massive SUV defies logic in many ways, so its styling doesn’t get the regular updates that might be applied to other vehicles. It’s vintage, but looks brand-new.

The fascia has been updated in the recent past, but the classic SUV profile and general shape tell the real story.

The Heritage Model gets gold wheels and roof rack that go a long way in recalling the roots of this SUV. That the hardware is here to back up the purposeful looks only makes the Heritage Edition look even cooler.

Just as the exterior has remained unchanged, so has the interior. There have been some updates here and there, such as the 9.0-inch touchscreen filling the dashboard.

The Land Cruiser remains one of a shrinking number of vehicles that does not offer Apple CarPlay or Android Auto. The interface requires engaging with the native system, which works well but still leaves us wishing for the technology we’ve come to be spoiled by.

That said, the Land Cruiser isn’t entirely without features. Bluetooth is standard, as is wireless smartphone charging. The rear-seat entertainment option includes two 11.6-inch display screens and two sets of wireless headphones to go with them.

Features could be better, but build quality could not. The knobs, the switchgear, the door latches—all of it feels of the utmost quality. There is a tactile feeling of supreme craftsmanship that comes with every adjustment of the radio or turning on of the lights. The Land Cruiser might not be fancy, but it sure is built to an almost impossible standard of excellence.

Seating for up to eight is possible, but the third row bench is tight, especially for three people. The better bet is to stick to five passengers, each of which get ample stretch-out room across the front two rows. Excellent head room and leg room provide the cabin with an airy, spacious feeling.

When something is as big and hulking as the Land Cruiser, it’s easy to assume it drives like it looks. Those assumptions would be right. From behind the wheel it feels even larger than it looks. Every input will remind you that the Land Cruiser is a size XXL.

Steering is slow and numb. The engine is equally deliberate as it roars to speed, but its 381 horsepower never feels inadequate.

Off-road is its forte, and in that aspect it outdoes itself. It still uses a full frame and a live rear axle, and the middle differential can be locked for better torque distribution in off-road scenarios. It also comes with genuine four-wheel drive and a two-speed transfer case. Hill-descent control and a trick suspension round out the tricks employed in the name of backwoods shenanigans.

The result is an SUV that can tackle almost any terrain. Its only impediment is its size.

The 2021 Toyota Land Cruiser has iconic capability and reliability that have enshrined it among a small but loyal set of consumers. For those who won’t settle for anything else, we recommend the Heritage Edition.