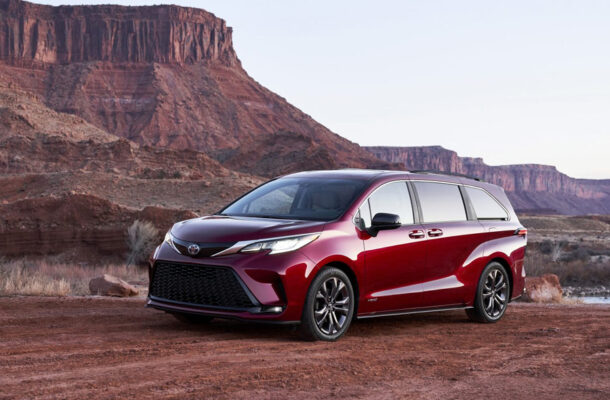 The 2021 Toyota Sienna, a seven or eight-passenger minivan with available all-wheel-drive, has been totally redesigned for 2021. It’s built on a new platform, the cabin has the latest technology, and, for the first time, comes with Toyota’s winning hybrid system, enabling 36 miles per gallon.

The hybrid system uses a 2.5-liter 4-cylinder engine that makes 189 horsepower, combined with a 180-hp electric motor to make a total of 245 horsepower. It’s not as quick as the old V-6, but that 36 mpg is a 15-mpg gain over the previous powertrain.

Made in Indiana, the Sienna is available in models from the sensible and durable LE to the lavish and high-tech Platinum. It rides like a luxury car while providing handling that’s quick and light, along with good maneuverability around town. All three rows of seats are roomy enough for adults, while the cabin offers thoughtful and useful storage spaces.

On the Limited and Premium models, outward visibility is enhanced by a wide-view digital rearview mirror, and a surround-view camera system.

The Sienna XSE is the sporty model, with blacked-out lower aero trim. It starts at $43,175 in front-wheel drive, or $43,875 with all-wheel drive. Every Sienna from the XSE upward seats seven, with captain’s chairs instead of a bench in the second row.

A 1500-watt AC inverter with two outlets is offered as a $300 standalone option, and a rear-seat entertainment system optional on the XLE model and above has a fold-down 11.6-inch display with an HDMI input plus a remote and two pairs of wireless headphones. A refrigerator is also available.

Even with minivan proportions, it’s hard not to find some beauty in the 2021 Sienna. It can’t avoid the minivan “two-box” design that creates the interior space, but the Sienna brings a low and rakish hoodline with its steeply sloped windshield.

And there is the fresh sculpting. Between some aggressive creases, there is smooth contouring that reflects light differently, depending on the point of view or time of the day. Sometimes the Sienna can even look two-tone.

The LE, XLE, and XSE get black trim, while the Limited and Platinum have more chrome and badging.

The cabin has been redesigned to be multi-tiered—no less than five layers, not always coordinated but all of them functional. The “bridge console” extends to the dash, providing small storage spaces on top and larger spaces—big enough for a handbag—on bottom. There’s a horizontal cargo tray across the dash, punctuated by shiny trim; it’s especially good for mobile phones. All told, counting the doors’ upper trays and lower pockets, there are 16 cupholders.

The mostly soft-touch materials mix with upholsteries that feel tough enough to weather spills and children. Limited models step up from synthetic to real leather, while Limited and Platinum versions get leather heated and cooled front seats and the Platinum gets heated second-row seats.

The second-row bench seat in the 8-passenger LE and XLE can’t be removed, but it does flip forward for easy access to the third row. The captain’s chairs in the seven-passenger XSE and up are as supportive as the front seats; they slide back 25 inches, allowing a limousine-like amount of leg room. Some Limited and Platinum versions come with a flip-up ottoman-like feature, essentially creating your own La-Z-Boy.

The third row is roomy, as third rows go, but three adults back there might be optimistic.
The row is split 50/50, and flips forward then pulls back into a rear storage well, providing a flat cargo floor. The motion to accomplish this is smooth and fairly low-effort.

Entry and exit are easy. With the key fob in your pocket, the sliding side door opens with a swing of your foot under the rocker panel.

Toyota hasn’t stated the 0-60 acceleration time for the new hybrid Sienna, but it’s fairly slow. Our seat-of-the-pants estimate is about eight seconds. But you can’t argue with 36 mpg, for a family.

The 189-horsepower, 2.5-liter inline-4 engine is mated to an 180-hp electric motor, and 1.9-kwh battery pack. Through Toyota’s planetary-gear system, that amounts to a system output of 245 hp.

As in Toyota’s other hybrids, the system allows the engine to shut off during lower-speed driving for short distances, or when coasting, and it recaptures energy from deceleration and braking to recharge the batteries, and help boost acceleration or provide that electric operation.

The all-wheel drive system includes an additional 54-hp electric motor that drives the rear wheels, for up to 80% of the power distribution.

The rest of the driving experience in the Sienna helps make up for the merely adequate acceleration. The ride is quiet, and the suspension soaks up jolts while staying stiff enough for the Sienna to feel far more coordinated on twisty roads or freeway cloverleafs than most crossover SUVs. The steering is light, quick and precise, and the brakes have been recalibrated to be smooth and progressive.

What’s not to like about this state-of-the-art family vehicle? The 2021 Toyota Sienna provides every comfort and convenience for its passengers, handles well, rides smoothly, gets 35 mpg with all-wheel drive, and is affordable given all those virtues.