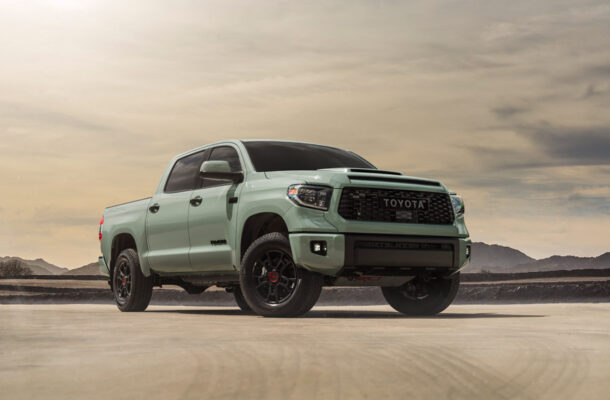 The 2021 Toyota Tundra is a full-size pickup truck with a muscular V-8 and a choice of bed sizes and body styles.

For 2021 it gets two new trims, in Nightshade and Trail Special Editions. It comes as an extended cab or crew cab, and it’s available with three bed lengths.

All Tundras have automatic emergency braking, which is something not many trucks offer as standard equipment.

The Tundra’s 381-hp 5.7-liter V-8 has a wonderful musclecar feel, and delivers very smooth acceleration. The 6-speed automatic is also smooth but needs a couple more gears to get better gas mileage. That combination enables the Tundra to tow 10,200 pounds or carry 1,730 pounds in its bed. It uses a part-time four-wheel-drive system.

The EPA pegs the Tundra at 13 mpg city, 18 highway, 15 combined with rear-wheel drive and 1 mpg less with four-wheel drive. It can be run on regular fuel.

Standard front seating is an old-school bench, but bucket seats with a center console are more common. The rear seats have very upright back rests, but the bed offers all the utility truck buyers expect.

In addition to automatic emergency braking, the Tundra comes standard with automatic high-beam headlights and adaptive cruise control. The NHTSA gives it four stars overall, with only three stars in rollover protection.

The four-wheel drive SR5 costs about $42,000, and adds an 8.0-inch touchscreen and a few USB ports. The crew-cab body style becomes available with the SR5.

The most expensive Tundras cost more than $50,000 and get JBL premium audio, heated and cooled seats, a sunroof, and leather upholstery.

The Tundra’s styling hasn’t changed much since 2008. It’s bulging and muscly like most other full-size pickup trucks—but somehow the Tundra’s shape comes off more ungainly. The TRD Pro looks best, with its body-color bumper trim and grille.

The Tundra cabin is dated but functional. It’s trimmed with big buttons and knobs and lots of hard gray and black plastic.

The 1794 Edition is an exception, being somewhat swanky. It’s named for the ranch where Toyota built the plant that builds the Tundra, outside San Antonio. It’s shod in saddle brown leather and warmer tones.

The Tundra easily seats five or even six with the bench in front, where passengers are treated well. All Tundras come standard with that front bench seat with a fold-down armrest, but most buyers will prefer the power front seats, which get captain’s-chair cushioning, heating, cooling, and leather on the most expensive models.

The Tundra comes in extended-cab and crew-cab versions. Rear leg room is lacking in the extended cab. Crew cabs have excellent leg room and wide doors, but the rear seat is upright and not comfortable for very long.

The 381-hp 5.7-liter V-8 is one of the best reasons to buy a Tundra. Its appeal endures long after other full-size trucks have turned to turbo V-6 and even turbo-4 engines. The big sweet V-8 sounds like it’s attended a few NASCAR races. To go with the exhaust note, there’s an oomphy 401 lb-ft of torque. There is a buttery power delivery, rebellious growl, and slick-shifting 6-speed automatic. Of course, it still handles like a truck.

It’s capable in mud, snow and offroad. The four-wheel-drive transfer case is old-school, not like the more modern all-wheel-drive systems, but that makes it more rugged.

The Tundra uses an independent front end and a solid rear axle. For the most part, the ride is soft enough to work as a daily driver. The TRD Pro has rugged Fox shocks and big knobby tires tuned for off-road driving, not duty as a second car.

The Tundra’s heavy steering and giant turning radius turns parking lots and city driving into a chore. Of course that’s no different than almost every other full-size truck on the market.

The 2021 Toyota Tundra lags behind its American-brand competition, but it still offers that great V-8, and plenty of towing and hauling capacity. We’d take the 1794 edition for its warmly rendered cabin.