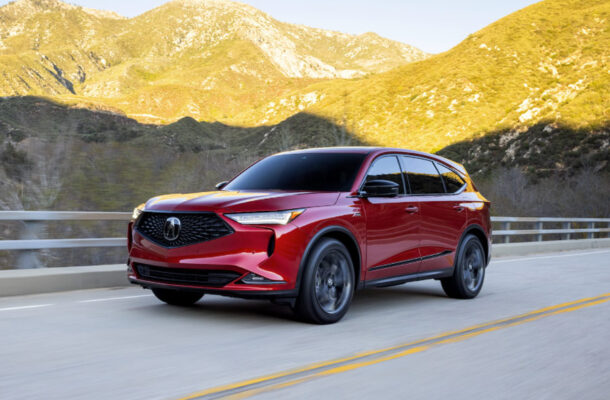 The Acura MDX is a three-row crossover SUV that can seat up to seven passengers, offers some of Honda’s most advanced technology and luxurious features, and comes as front- or all-wheel drive. For 2022, most everything is new but the familiar powertrain, which remains smooth and reliable.

Acura’s 290-hp V-6, mated to a 10-speed automatic, accelerates with authority (Acura says a 355-hp twin-turbo version is coming). That much is the same. However the ride and handling are greatly improved, thanks to the stiffer body, which also creates more room in the first two rows on a wheelbase expanded by nearly three inches.

Made in Ohio, the 2022 Acura MDX is sold in base, Technology, A-Spec, and Advance models.

The sporty $58,125 A-Spec gets black trim on the grille, mirrors, headlights and taillights, and windows, along with 20-inch gray wheels, sueded seat trim, and cooled front seats.

The warranty of 4 years/50,000 miles includes some service.

Although the 2022 MDX has a longer wheelbase, its new sinuous shape mimics the smaller Acura RDX crossover. There’s even a touch of TLX sedan. It looks European. It looks lean despite its size.

Inside, the MDX has a wide center display above buttons for climate controls and the transmission. There are ribbons of open-pore wood trim and contrast-stitched leather on top models. A customizable 12.3-inch digital display takes the place of analog gauges.

The infotainment system consists of a non-touch-sensitive display and a touchpad on the console which takes finger swipes to toggle between icons. It’s difficult because there’s not enough space on the pad to equal the width of the display, so it can take three or four swipes to swap between functions. And the touchscreen doesn’t offer an input for wireless smartphone charging. Redundant controls on the steering wheel, even voice commands, work better.

The center console’s extruded shape offers some extravagance in its many storage spots. But the design eats up usable space, particularly around the saddle-style transmission controls.

In front, driver and passenger have at least 12-way adjustment in well-bolstered buckets. Even a tall driver has good head room under a standard sunroof. The base model has synthetic leather but every other model has real leather. The Advance gets open-pore wood trim.

Second-row passengers have great space, with 38.5 inches of leg room, and the three-person bench slides on a 5.9-inch track.

The middle seat section can be removed to make the seven-seat MDX into a six-seater with a middle aisle to the third row. It’s a simple alternative to captain’s chairs, and a great solution for a family with three or four children.

Where the MDX makes its compromises is in the third row, which is tight. There’s just 29.0 inches of legroom and 36.2 inches of head room. It’s not for adults.

Behind that row there’s 16.3 cubic feet of cargo space, with another 1.8 cubic feet under a reversible panel.

With the third row folded and the second row slid forward, there’s 48.4 cubic feet of space, and 71.4 cubic feet behind the front seats.

The sophisticated all-wheel-drive system is available on the base and Technology models, and standard on the A-Spec and Advance. It can transfer 70% of power to the rear wheels, and split that power between the right and left side for better traction in mud or snow, and better grip in cornering on dry pavement.

The 10-speed automatic transmission changes gears nearly flawlessly, and responds with enthusiasm to paddle shifting in Sport mode. It has a lower launch gear, a wider gear range, and the ability to change as many as four gear spans at once.

The electronic driving modes are Normal, Sport, Comfort and Snow. The programs change not only power response and shift timing, but also the digital displays and level of engine noise allowed into the cabin.

The MDX ride and handling beats its rivals big time. There aren’t many, if any, 7-passenger SUVs that love to be hustled around twisty back roads.

With its double-wishbone front suspension with hydraulic bushings, and its multi-link rear, the MDX ride is as taut as a guitar string. The springs and dampers resist small bumps and relax to absorb bigger ones. It takes tight corners well, on its 19-inch all-season tires. The A-Spec gets 20-inch wheels that don’t stiffen the ride.

The steering cuts a precise line without much feedback, but the amount of give is just right. The feel of the brake pedal is problematic, however; the stroke is too long, and it doesn’t feel progressive until the pedal nears the bottom of its travel.

With an available hitch, the MDX can tow up to 5,000 lb with AWD, or 3,500 lb with front-wheel drive. Its 7.3 inches of ground clearance give it some off-road ability, but nothing too rugged.

The 2022 Acura MDX is one well-equipped, well-sorted luxury SUV. Even in base trim, it has everything it needs, from a great powertrain, to excellent ride and handling.