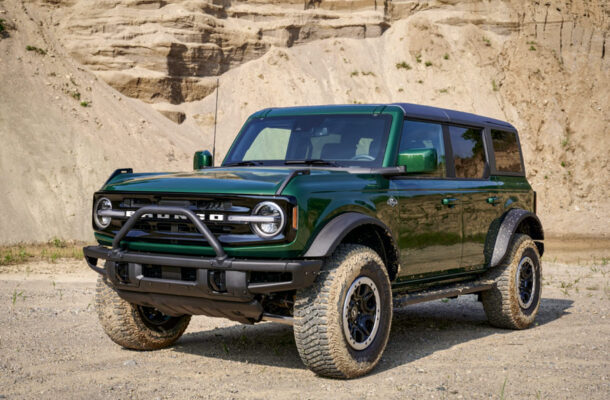 The flashy Ford Bronco, revived after a quarter of a century, is a 4WD body-on-frame SUV that comes as a four-seater with two doors or five-seater with four doors (which is longer by 16 inches), and hard or soft tops. It’s an antidote to the ubiquitous Jeep, with state-of-the-art technology, including a potent little turbo engine with 7-speed manual transmission, or a twin-turbo V-6 with a 10-speed automatic.

The Bronco has a bulldog-like stance, shoulders and haunches. The cabin is retro, with a wide and flat dash having knobs, switches, and levers with rubber coatings, plus rugged rubber floor coverings.

There are a couple of engines, starting with a 2.3-liter turbocharged I-4 that makes a solid 275 horsepower, mated to a standard 7-speed manual transmission with a super-low first gear for offroad rock crawling. The other engine is a 2.7-liter twin-turbo V-6 with a ton of torque, mated to a 10-speed automatic; it comes with a 4-door body. That 10-speed is available on the smaller engine, as well. And there’s a choice in transfer cases and locking differentials, both front and rear.

With an independent suspension in front, and electric power steering, the Bronco is well mannered for the rutted dirt paths it’s meant to cross. On the highway, it bounds and whistles with wind and road noise.

The Bronco is made in Wayne, Michigan, and comes in a wide range of trims. At $30,795 the Base two-door comes with 4WD, 7-speed gearbox, manual cloth seats, an 8.0-inch touchscreen with wireless Apple CarPlay/Android Auto, and 16-inch steel wheels with 30-inch all-season tires. A four-door is $4,150 more, but that includes the 10-speed automatic, which is a stand-alone option at $1,595.

The Black Diamond is the off-road specialist. For about $38,000 it comes with vinyl upholstery, rubber-covered floorboards, rock rails, skid plates, rock rails, tow hooks at both ends, a rock/crawl mode, and Molle straps. For another $7,000 it can be beefed up with the Sasquatch package with 35-inch Goodyear mud-terrain tires on 17-inch beadlock wheels, Dana locking axles, raised suspension, and long Bilsteins. That package is also available for the Base, Big Bend and Badlands–it’s only $4,000 on the Badlands because that model already has some of that equipment.

The Outer Banks is more for the highway, and for $41,000 comes with the 10-speed automatic, steps to help climb into the cabin that sits above 18-inch alloy wheels. The four-door version is $42,945.

Back to off-road, the $46,000 Badlands gets serious, with 33-inch A/T tires, a Baja mode for high-speed off-roading, electronic locking front and rear differentials, and a disconnect function for the front stabilizer bar.

The $50,000 Wildtrak, which comes with the V-6, is basically a Badlands with the Sasquatch package.

Ford offers more than 200 accessories and upgrades, which can easily jack the price up another 10 grand. Every model is available with Mid, High, Lux, or Sasquatch packages. The Mid (standard on Outer Banks and Wildtrak models) adds heated front seats, dual-zone climate control, remote start, navigation, and driver-assist features such as active lane control.

The High, available on Outer Banks and above, adds a 12.0-inch touchscreen and a surround-view camera system. Off the road, the screen uses a camera under the vehicle to show what’s coming on the ground.

The warranty is 3 years or 36,000 miles with roadside assistance. Buy a Bronco and you also get an off-road “experience” for 1 ½ days at one of four locations Ford has around the country.

After being away (and missed) for 25 years, it would have been wrong for this icon not to be retro, and the Bronco doesn’t disappoint in that regard. But it’s well balanced with contemporary, so the styling comes off as timeless.

The cabin is adventuresome and durable. The upholstery ranges from cloth to vinyl to leather, with rubberized floor covering on some models, complete with drain plugs.

The horizontal instrument panel has the word “Bronco” and its emblem all over the place, in between tall boxy climate vents and six switches along the top. Grab handles at each end help to climb in. At the center of the instrument panel is a standard 8.0-inch touchscreen, or 12.0-incher on upper models.

The bolstering is good on the front seats, but the cushions are a bit short. The two-door doesn’t accommodate four tall passengers so well, while the four-door, being 16 inches longer, improves things with 36.3 inches of rear leg room, but the middle seat doesn’t have the same hip and shoulder room as the outer seats. The four-door also has 35.6 cubic feet of cargo space.

The standard hardtop on the two-door is three panels: right, left and rear. There are optional sliding soft sections for the left and right panels, enabling a semi-convertible mode. The soft top on the four-door is standard, and it’s quieter, and slides rearward in about a minute.

A hardtop for the four-door is available for $695. One person can remove it. It has four panels that can be carried in the cargo space. The doors also are removable, and they too can be stored in the cargo space—just not at the same time as the roof.

The base 2.3-liter turbo-4 is also used in the lighter Ranger pickup, maybe that tells you something. It makes 275 horsepower and 315 pound-feet of torque on regular fuel, but when premium is used, the output jumps to 300 hp and torque to 325 lb-ft.

A 7-speed manual gearbox is standard with the turbo-4, and not available with the twin-turbo V-6, which uses a 10-speed automatic. The 7-speed has a Crawl setting with a super-low 94.75:1 gear ratio. After that, it’s a 6-speed manual with short shifts and clutch action that’s just right.

The 10-speed automatic that comes with the V-6 is also available on the turbo-4, and it’s seamless.

There are seven drive modes that change the programming to adapt to conditions. Sport mode not only quickens the throttle and steering response, it reminds you what’s going on by turning the gauges red.

The steering alone has three modes, and in any of them it’s dead-center true.

The Bronco’s curb weight of about 4,500 pounds contributes to its stability on the highway, and it’s not affected by wind gusts despite being shaped like a brick.

The beauty of the Bronco is that it’s easy for off-road newbies to drive, and still appreciated by those with more experience. The standard 4WD can be shifted in and out while the Bronco is moving; or there’s the heavy-duty two-speed transfer case that needs to be neutral with the truck stopped, to get in low range.This system uses a Dana 44 solid rear axle, with available independent front and rear lockers.

The suspension is independent in front, with coil-over shocks in the rear, while the rack-and-pinion power steering is electric-assist. This setup rides well. Still, as the Bronco gets up to freeway speeds, you’re reminded that it’s more comfortable off-road.

The Sasquatch package, with its advanced 4WD system and 7-speed gearbox, uses Bilstein position-sensitive shocks with three-range damping, and 35-inch all-terrain tires. A “bigfoot” Bronco can climb a slippery rocky slope as steep as 40 degrees, cross a stream that’s 33.5 inches deep, blast through thick mud, or, in Wildtrak’s Baja mode, fly over jumps.

The 2022 Ford Bronco revives the storied badge with all the off-road bases covered, from base to Sasquatch trim. It’s reconfigurable, retro, and rowdy fun. Get the Badlands for the most extreme experience, or the Outer Banks for the look.